Men escape fine, jail for having iguanas out of season 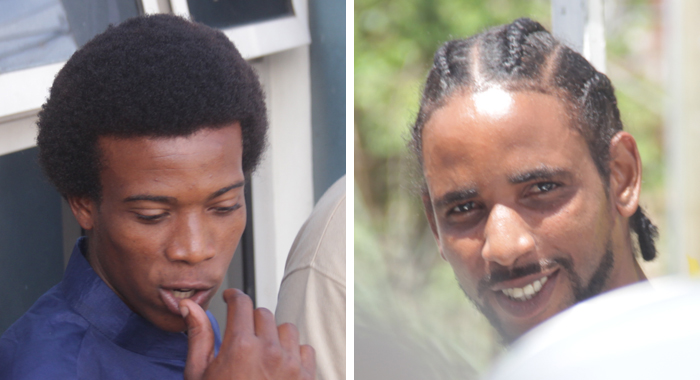 Kimal Harry and Curtis “Shooter” Small were reprimanded and discharged and urged to spread the word about not hunting out of season. (iWN photos)

Two men, on Tuesday, escaped a fine or jail time for catching iguanas during the closed season but were asked to tell their friends that doing so is illegal.

Senior Magistrate Rickie Burnett declined to impose a fine or jail term on Curtis “Shooter” Small, 29, and Kimal Harry, 25, of Edinboro-Ottley Hall although they brought money to court in anticipation of a fine.

The men changed their plea to guilty on a charge that on Sept. 12, 2018, at Ottley Hall, they had in their possession four iguanas during the closed season.

The facts of the case are that about 2:50 p.m., on that date, Bradford Latham, Forestry Officer responsible for law compliance and enforcement, and a party of forestry officers, acting on information, were patrolling in the Ottley Hall area.

While in the area, they saw the defendants walking in the area of the marina.

Small had a multi-coloured JanSport bag.

The forestry officers approached them, identified themselves and requested a search of the bag.

The found the four iguanas in the bag. Harry had a cutlass in his hand.

The officers pointed out to the defendants the infraction and took then to the Criminal Investigation Department in Kingstown.

Sergeant Bowens entertained the report and cautioned the defendants but they did not give a statement.

Two of the iguanas were live and were released back into the wild and the two dead ones were kept as exhibits.

Small told the court that he got his nickname because he is a football striker. He said he is a vendor.

Harry is a mason and a labourer.

The men said that at the time they did not know the dates of the closed season for hunting iguanas.

Small said he does not really hunt iguanas but he takes his dog and then he shakes the trees and the dogs will catch the iguanas when they fall to the ground.

This triggered some snickering in the court.

“Whose [are] the dogs?” asked Senior Prosecutor Adolphus Delplesche, who was at the bar table but was not involved in the case.

The magistrate pointed out to Small that the dog is part of the operation.

“The dog will take care of them when they come to the ground,” Burnett said.

In his comment to the court, Latham pointed out that the hunting season for iguanas runs from Oct. 1 to Jan. 31.

He, however, said that over the years, his department has been receiving reports of persons hunting in September.

“So this is something we have been on the lookout for,” he said, adding that some hunters can’t wait for the season to begin.

He added that it is a practice that the Forestry Department has been warning people against.

“This is something on which we want to send a strong message to the public to respect the hunting season and give the animals a chance to recover their population,” he said.

Asked how he thinks the court should send that strong message, Latham said that the defendants were very cooperative and his team did not meet any resistance from them.

He suggested that the court impose a fine, noting that the law provides for a fine of up to EC$2,000 and two years in prison.

The magistrate said he wished he could have imposed a penalty on the defendant in such a way that the money could go to the Forestry Department, to help finance its work.

“That would have been good. But the way things are done now, any fine that is imposed is going to the Consolidated Fund,” Burnett said.

The magistrate said he understands that the defendants had money because they came well prepared.

Small told the court that he had EC$500, but added that he had to buy some books for his daughter.

The magistrate pointed out that the men had cooperated with the forestry officers and the police.

“What they did is wrong and was wrong,” he said, adding that the men showed remorse and did not take the court through a trial.

He noted that it was the men’s first conviction for that type of offence, adding that while the men had money to pay, he was contemplating giving them a break, noting that one had raised the issue of having children to take care of.

“I am minded to give them a chance on this one and not to impose a fine,” the magistrate said, adding that he knows that the defendants are surprised.

“Sometimes, you have to show mercy to others and I believe I show a lot of mercy in this court, he Burnett said.

He told the defendants that he expects better from both of them and that he is going to give them a chance and not impose any fine.

Burnett told the men that he expects them to do better and to talk to their friends as well about not hunting outside of the season.

The magistrate ordered that the carcasses of the dead iguanas be disposed of.

8 replies on “Men escape fine, jail for having iguanas out of season”