Man jailed for motorbike stunts while barred from driving 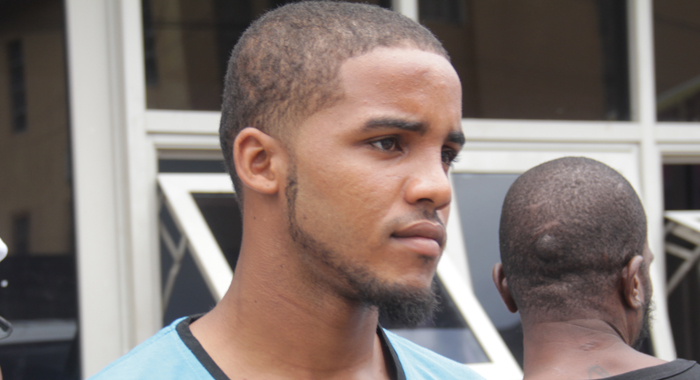 Enrique Gregg is escorted to prison on Monday. (iWN photo)

A 22-year-old Bequia man who performed stunts on a motorcycle while being barred from holding a driver’s licence will spend the next three months in jail.

Enrique Gregg had never been the holder of a driver’s licence when he was charged on July 19, 2019, after getting into an accident.

As a result, magistrate Zoila Ellis-Browne barred him from holding or obtaining a driver’s permit.

But last Friday night, Aug. 16 — less than one month later — he was back at it, this time performing stunts in the public road at midnight on the northern Grenadine island.

Police Constable 725 Parris, who was aware of the man’s history with the court, was at a bar in Hamilton about 11 p.m. when she saw Gregg ride along the Hamilton Public road on the motorcycle.

At about midnight, the police officer saw Gregg doing stunts on the motorcycle in the public road around the same bar.

She told him of her observation and the information she had regarding the court’s decision.

Gregg replied: “Officer, me sorry. Ah just take a chance. Come leh me go home for some money to buy you all some drinks.”

Police officers arrested Gregg and took him and the bike into custody and brought four charges against him.

When he appeared before Senior Magistrate Rickie Burnett at the Kingstown Magistrate’s Court on Monday, Gregg pleaded guilty to the charges, namely:

That on Aug. 17, at Hamilton, Bequia, he rode the motorcycle P3322 while being barred by magistrate Zoila Ellis-Browne; that being the rider of the same vehicle, he failed to wear securely on his head a protective helmet; that he used the vehicle without the relevant licence for the period March 1 to Aug. 31, 2019; and, that he used the motorcycle without there being in force a policy of insurance regarding third party risk.

In mitigation, counsel Stephen Williams said that his client was not wasting the court’s time and was accepting the facts.

He said Gregg was at a party and could not resist the urge to ride the motorcycle and decided to take a chance.

Williams said he had explained to his client the seriousness of the charge, telling him that it is basically contempt of court.

The lawyer said Gregg is a construction worker and has a 3-year-old son.

“Young, your honour; youthful exuberance but he has to know the seriousness of the charge,” Williams said and asked the court to exercise some leniency when imposing its sentence.

In her submission, Samuel told the court that Gregg was aware that he was barred from holding a driver’s licence.

She said the last time he was convicted of the same offence, an accident had occurred.

“Contempt of court, yes, but we need to show the defendant that what he did could have been worse. He was doing stunts, your honour, he could have injured somebody,” she said.

She said the prosecution was asking that the sentence reflect the seriousness of the offence.

The prosecutor said she thinks that drivers slight the nation’s traffic laws, adding that, every week, people come before the court charged with these same offences.

“And he was given the opportunity before,” she said of Gregg.” So he needs to see the seriousness of what he did.

But in his response, the magistrate responded directly to the defence counsel.

“Mr. Williams, I don’t usually send people to prison for traffic offences but when people conduct themselves like this, what does a court do?

“I am afraid your client is looking at a short stint at Her Majesty’s Prison,” Burnett said.

“Now he starts crying,” he said of Gregg, adding that people need to know the consequences of the decisions they make.

“Disqualification, it has one meaning,” Burnett said and sentenced the man to three months in prison on each count.

“Mr. Gregg, hard lesson for you this morning, but you have to blame yourself,” Burnett said.