Promising tennis players head off to US on scholarships 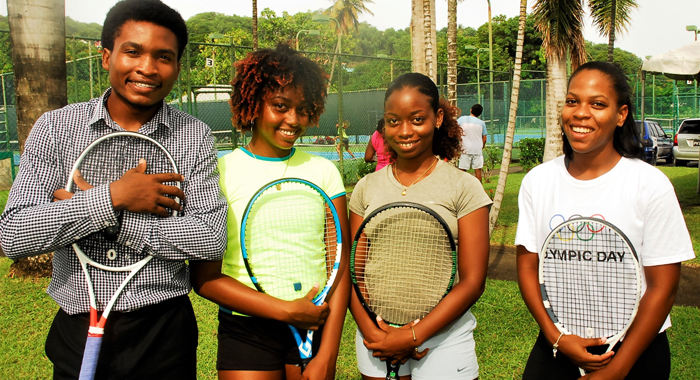 Tony Boyea is one happy tennis coach, as two of the players he has coached over the years, have left St. Vincent and the Grenadines (SVG) on tennis scholarships.

The two – twin sisters Amarlia and Gabrielle Benn — along with Myka Williams, and Josh Mounsey, left St. Vincent on Saturday bound for the United States, to take up their tennis scholarships.

“I am feeling very elated for Gabrielle and Amarlia Benn,” Boyea said. “As a matter of fact, they are my god-daughters, and way back, I had coached the mother way back in the 1980s.”

Karen Anderson, the mother of the twin, became the number two tennis player in SVG. She represented her country in a number of tournaments playing singles, doubles, and mixed-doubles.

Boyea noted that the Benn sisters possessed tremendous potential and “going to the States would only enhance their capabilities”.

The journey of the Benn sisters, along with Williams and Mounsey has great significance for the development of the game in SVG.

Boyea pointed out that the Benn twin are two of the top female players in SVG at present, and in recent national championships, Gabrielle came out on top. This is despite her sister beating her in the semi-finals.

“I think that they are going to be good ambassadors for St. Vincent and the Grenadines,” Boyea said.

The tennis coach for the Ave Maria University, who is Brazilian, was quite impressed with the YouTube videos of the twin sisters and he wanted them to be part of the institution’s tennis squad for the coming semester.

Both Amarlia and Gabrielle are expected to be thrust into tennis action next week.

They have been schedule to represent the Ave Maria University in a tournament the week following their arrival.