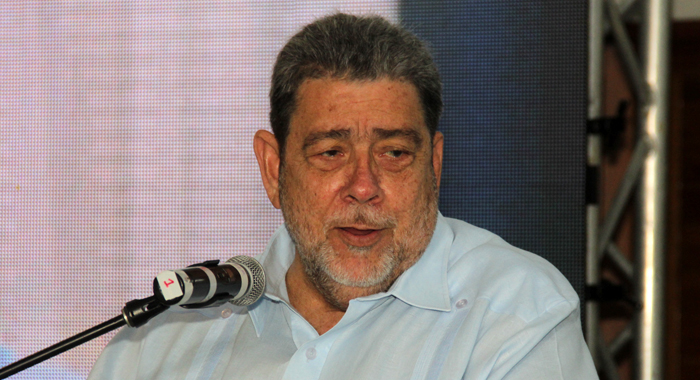 KINGSTOWN, St. Vincent (CMC) — St. Vincent and the Grenadines (SVG) Prime Minister, Ralph Gonsalves, Wednesday underscored the importance of the tourism industry to the socio-economic development of the nation and urged stakeholders to ensure its sustainability.

Addressing the opening of the Caribbean Conference on Sustainable Tourism Development (STC2019), Gonsalves said he was aware of nationals with an untoward attitude to tourism.

“We must have it as the Maroons said in Jamaica, when they were fighting the British, the quest must be a noise in your blood and an echo in your bones for every single Vincentian, everyone,” Gonsalves said.

The three-day conference, which is being held in collaboration with the St Vincent and the Grenadines Tourism Authority (SVGTA), will allow industry experts to address the urgent need for a transformational, disruptive, and regenerative tourism product to meet the ever-rising challenges

It is being held under the theme “Keeping the Right Balance: Tourism Development in an Era of Diversification” and Gonsalves told the ceremony he is also aware of people who still hanker for mass agriculture.

But he reminded the audience that the United States has 80% of its economy in services while the number of persons in the agricultural sector is declining.

“They produce a lot of food. The United States of America is the largest producer of food, but, as a proportion of the economy, in terms of employment, very small and of the economy overall,” Gonsalves said noting that in Britain, agriculture accounts for at least 2% of the economy.

He said SVG has to adopt a similar here SVG may well be “a local disruption by creating spaces and the kinds of income which could be earned for ordinary labourer would be higher than that if you growing sweet potatoes or yam.

“But we have yam to eat and sweet potatoes to consume and we can’t feed ourselves on ganja, though we can use the money to import, but we have to do our balance to have a sense of security of food.”

Gonsalves said he knows some people, including some in the media, who are of the opinion that “tourism is only for white people and when they come here, they walking ‘bout place and they staying in good hotels, they down at the beaches’ and all of these things”.

But he said he wanted to make it clear also that the beaches here are open to everyone and “only a minority, a tiny minority of persons who have not yet learnt the way to triumph over the disabilities and the limitations and the legacy of underdevelopment from native genocide and the enslavement of African bodies, is not to live in the past but to use our knowledge of the past to rise and rise triumphantly in our own interest and to utilise what we have in our environment…

“Its natural beauty, its beaches and the like to make a good living off of that where we are inviting people to come and enjoy that with us. And the overwhelming majority of people in this country share that perspective, but, often, the discordant few get the coverage…”

“But, invariably, they are warriors in New York, London, Toronto, Winnipeg and the like, quite enjoying the white people money and don’t want to come home. I know this is going to get headlines and I am going to be attacked for saying this, but I am saying that we cannot live in the past,” Gonsalves said.

“We have to triumph in the current period, that is to say, get a level of consciousness and understanding; not to forget the past but to internalise it and utilise it within our own interest and where we have to make relevant demands, including reparations for native genocide and African slavery, we make those demands, but not in a confrontational manner, but in a manner consistent with a partnership which is required of all of us on this small planet which we call earth.”

Gonsalves said when people visit the country they must know that they are coming to a place that is welcoming, warning however, that if the government does not reduce poverty and create jobs, there would be resentment, as is the case in parts of Italy because of some localised factors.

“And that is why me must make tourism a noise in our blood and an echo in our bone”.

Gonsalves said there were several challenges to sustainable tourism in the region, namely, climate change and its consequences; resource scarcity, including non-renewable energy; fresh water; aging population; growing economy and increase in the absolute numbers of the global poor; artificial intelligence; and the fact that the challenges cannot be dealt with unilateral or by nativist responses.

He said that Kingstown has lodged Sustainable Tourism Development within the framework of the Sustainable Development Goals (SDGs), which are part and parcel of the island’s developmental thrust.

Gonsalves said his Unity Labour Party administration specifically incorporated the 17 SDGs into its manifesto for the 2015 general elections and this constituted part of the conversation with the electorate.

“And, of course, we are re-elected for a fourth term,” he said, adding that his government takes this as a specific mandate from the people, in addition to world leaders having signed on the SDGs.

The prime minister further said that in the National Economic And Social Development Plan 2013 to 2025, the section on tourism elaborated many of the ideas and principles of the SDGs in relation to tourism, although the document predated the SDGs by two years.

“This is not a matter that is a sideshow for us, this is part of the real act. Not part of a warm up act, it is Beyoncé and Rihanna preforming together,” Gonsalves said.