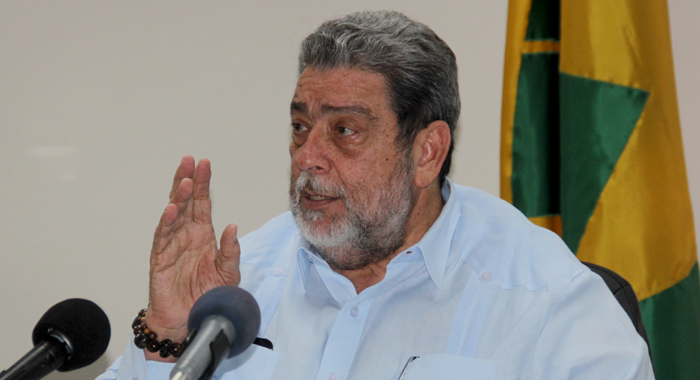 Prime Minister Ralph Gonsalves has called on sports administrators to abandon what he suggested was their partisan outlook and work along with his government in the interest of their various disciplines.

“Look, there is no way we get people to a sport unless everybody is interested in the sport,” Gonsalves told a press conference in Kingstown last week Tuesday, Aug. 20.

“Unfortunately, we have some people in some associations who are presidents of some of them, they believe their job is to be in opposition to the government but I don’t know why they don’t try, because they have been opposition to me since 2001, since before that, and every election, they are hoping that Ralph would change so that they themselves might come into some kind of a kingdom, I don’t know what kingdom they are talking about,” the prime minister said.

He said some of these people want the government change so that they can run the National Lotteries Authority, while others want to be chair of the board of directors of the Bank of St. Vincent and the Grenadines or in charge of VINLEC, the state-owned electricity company.

“… and they are always hoping and up to now, they ain’t making it and they getting old like me,” the 73-year-old leader said.

“Well, wha’ going happen? Why they don’t just stop this thing and leh we work together.

“It should tell them that they have opposed me from even before 2001, their opposition to me doesn’t stop me from winning. In fact, I would be happy for them to continue to oppose me because it means that if I only have them opposing me, I’m all right because if I win with them in opposition, chances are that I will continue to win again if that is all that they do. So they should really come and leh we work together.

“I don’t have a problem if we all work together for the betterment of St. Vincent and the Grenadines, but they want to cocoon and hold themselves in this area. Some fellas want to be president of associations for life. Come on. We can’t have this sort of thing.”

Gonsalves said that parents and teachers must be talking about cricket, football and athletics.

“It must be something which is in us in the way in which athletics is there in the people of Jamaica, that has been built up through the school system and so on and so forth. It is no miracle in these things but hard and smart work in a focused way,” he said, as he spoke about his government’s intention to invest more money in cricket.

10 replies on “Some sports bosses acting like politicians — PM”