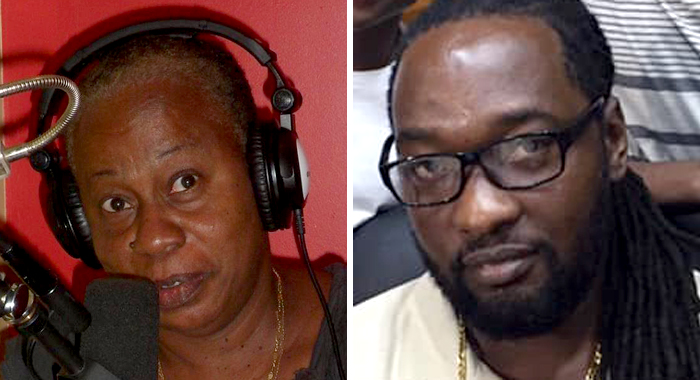 Last week Wednesday, Aug. 21, a caller to Margaret London’s “Night Nurse” programme on NICE Radio, told her that she should be killed.

The male voice repeated the threat before hanging up.

London is also a host of the NDP’s “New Times” daytime programme on NICE Radio.

Speaking Wednesday, on his weekly appearance on New Times, Cummings, who is also Member of Parliament for West Kingstown, said he noted “with extreme sadness the comment made” by the caller.

“To me, this speaks of where we have arrived in the bottomless pit led by a regime, illegal as it is, but systematically eroding all of the fundamental principles on which our society has been built, a regime that prides itself in making wrong out to be right, a rogue regime that refuses to apologise every time it offends singularly and plurally, a regime that demonstrates that it cares nothing about family and people but is obsessed with power at all cost,” he said.

The opposition lawmaker said his party makes it  “abundantly clear that such behaviour is intolerable, such behaviour should not go unpunished, because it sends a signal to our society that the rule of law does not apply if, if you are supported by a red regime.

“That cannot be and must not be allowed to happen and I am sure I speak for the leader and all members of the party when I say that we expect that the police… is on the ball and doing its diligence and will take appropriate action and do so speedily.”

He said the matter couldn’t be allowed to “slip under the rug.

“It’s untenable, unacceptable; it’s offensive to everything that is good.

“Margaret London, I want say to you personally. I know that you are a woman who gives in to no fear. I want to assure you that we, in the New Democratic Party, and all the good people in this country accept and respect the work that you are doing and totally, we are totally repugnant to this kind of personal vile attack on your person.”

Cummings said London was working to get the police “to do what they have to do.

“And we want to assure you that all right-thinking people of this country will be with you to make sure that he perpetrator is found and prosecuted so that people can again believe that we live in a society where rule of law takes prominence.

Speaking on the same programme, Leacock said he had heard the comments himself.
“For it to be reported is one thing but to hear the expression on radio live and direct, it really shocks you,” he said, adding that he has received similar threats more than once, including when someone called into a pro-government programme and expressed willingness to give him the first bullet.

“It shakes you up but you are human and you know if you have to lose your life for a good cause on the right side of history, then that’s life,” Leacock said.

“And Margaret, you are clearly a person, as Daniel said, made out of strong fibre, well anchored and you will take them in stride, not that you will be complacent and or indifferent. You will take the necessary security precaution that has to be taken but you will stand up and be counted.”

Leacock said that gunmen had accosted the late “E.G.” Lynch, a former New Times host, outside the studios of NICE Radio in Dorsetshire Hill after one of his programmes.

“So we are all subjected to these fears; it is a part of the trade which we live with but those people who do those things are cowards, especially those who make the calls.”

He said adding that he had heard, on a NICE Radio programme Tuesday night, people calling and flushing toilet about three times.

“Their fear must be one ah these days when they’re flushing they would go with it,” Leacock said.

On Thursday, Donnie Collins, who hosts the morning show on WE FM, told iWitness News that since the last elections someone has continually telephoned on-air, threatening to burn down the station and to kill the host.

He said the person has called into his show and during the Shake-Up programme.

Collins said that reports have been made to the police and telecommunications provider, FLOW, to no avail.

He said that the last call was on Thursday, but, recognising the voice, he ended the call before the person completed their rant.