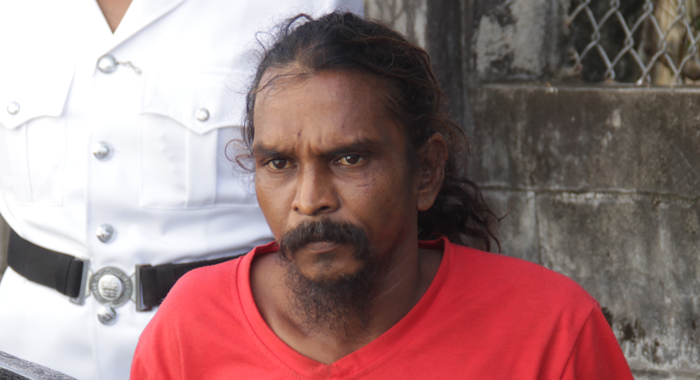 Osborne Yearwood was jailed for his crime. (iWN photo)

A man who pelted a 14-year-old girl with stones even after she had asked an aunt to accompany her out of fear of him has been jailed for his crime.

Chief Magistrate Rechanne Browne handed down the nine-month sentence on Osborne Yearwood, 42, of Calder, on Wednesday, at the Serious Offences Court.

She noted that the man had 19 previous convictions, some of which, though spent, were of a similar nature.

Browne pointed out that in the extant case, Yearwood had pounced on a vulnerable child who was walking alone and attacked her again even after she asked her aunt to accompany her.

Yearwood failed in his attempts to convince the court to impose a fine on him, blaming alcohol for his action and promising he would not bully the child again.

“I keep telling you to behave yourself. Put down the bottle. The bottle has a spirit but you don’t hear. You’re imbibing the spirit and a whole different legion is let go.”

She noted that Yearwood had said that he does not get along with the child’s family, adding that it, therefore, made sense that he would want to attack her.

Yearwood, however, said that is not the case and repeated his promise to never go down that road again.

Browne asked Yearwood what would have happened if he had struck the child with the stone or if she had fallen and was knocked unconscious.

“What were you like to do … and then she is in a vulnerable state after that.”

Senior Prosecutor Adolphus Delplesche had no sympathy for Yearwood and promptly recommended a custodial sentence.

“Look for your size and deal with them dey, whey dem knock yuh down,” Delplesche commented.

“Leave our children alone. They are the future of our nation; not you.”

One Tuesday, Yearwood appeared before Senior Magistrate Rickie Burnett on a charge that on Aug. 22, at Calder, he assaulted the 14-year-old girl with the intent to commit the offence of wounding.

However, Burnett recused himself, saying that Yearwood, a fellow villager is in the habit of cussing him.

Yearwood pleaded guilty when he appeared before the chief magistrate, on Tuesday, but the matter was adjourned to Wednesday, for sentencing.

The court heard that about 12:45 p.m. on Aug. 22, the child was on her way to a shop when Yearwood began to threaten her.

It was not the first time that he had done so, therefore, the child became fearful and went back to her house and asked her aunt to accompany her.

As the child and her aunt were returning from the shop, they met Yearwood standing in the main road.

Yearwood again went at the child and started to curse her in the presence of her aunt and other persons.

He took up two stones and pelted them at the child, who was able to dodge them.

In his submission on sentencing, Delplesche said that Yearwood’s antecedents don’t help him.

“And to me, he operates as a bully to that youngster,” the senior prosecutor said, adding that the court cannot allow such things to happen.

“We have to protect our children against adults who sought to show themselves — to use the local parlance — on people’s children.”

The prosecutor said he noted that the child is one of Yearwood’s neighbours.

“So we have to stop it and stop it [so] forcefully that he must know that he cannot intimidate people’s children,” Delplesche said, adding that people must live at ease and not live in fear.

He recommended a custodial sentence “so that message can go forth”.

In making his case against a custodial sentence, Yearwood said he and the child are friends but he and her grandparents are not on terms.

“Ah talking the truth but me and she personal, me and she is friend,” Yearwood said.

The magistrate noted that the girl is 14 and asked Yearwood what kind of friend he could be with her.

“That is the same think I wah fuh know,” he said, adding that he would “call out” to the child and she would tell him to stop calling out to her.

Yearwood said that his mother was in hospital with a heart attack, a fact that the arrested officer, Sergeant Lett verified.

The chief magistrate said the case was concerning, noting that it involves a child who was going her about her business and he repeatedly attacked her.

Browne told him that he attacked the girl more than one and had a chance to stop before the incident got out of control.

Yearwood said that was “true”. And that it was true that the case was especially disturbing because it involved a child.

After handing down the sentence, Browne told Yearwood she hopes he takes some time to reflect, adding that he keeps using stones and pieces of blocks in the commission of offences.
She further pointed out his problem with alcohol and encouraged him to seek help.