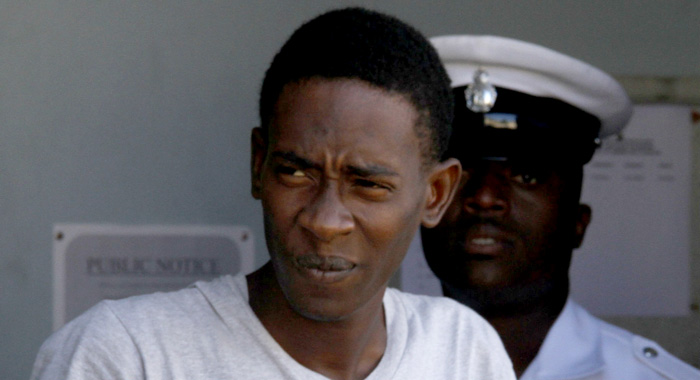 Lara Carter one of the accused men walked amidst the confusion over the charges. (iWN file photo)

One of the two last remaining accused at the end of burglary and damage to property proceedings at the Kingstown Magistrate’s Court walked free on Friday after it emerged that a charge to which he had pleaded guilty was not before the court.

Lara Carter, 27, of Ottley Hall, told the court that he had entered Harmony Investment Ltd.’s Triple S Supermarket at Biabou, but had not damaged the property.

And while the court had documents indicating that Carter had pleaded guilty to the damage to property charge, the accused man maintained that that was not the case.

On the other hand, while Carter said he was guilty of entering the supermarket, no such charge was before the court.

The case left prosecutor Police Constable Corlene Samuel stunned, and, after an adjournment during which she consulted with her superior, she said she could only play the hand she was dealt.

She admitted that based on the evidence presented to the court, which included video surveillance, there was no charge for which the court could convict Carter.

“From the get go, your honour, something was missing. Some investigation was not done. Work was not done on it, at all,” the prosecutor said in agreeing with the court that the case was handled poorly.

With the development, Tevin Robinson, 24, who is serving a four-year sentence for firearm possession, was left to face the music alone, having pleaded guilty to the burglary and damage to property charges.

Apparently encouraged by the development surrounding the charges against Carter, Robinson attempted to convince the court that he had only pleaded guilty out of “frustration”.

However, Senior Magistrate Rickie Burnett told him to abandon his efforts and went on to sentence Robinson to nine months in prison for the damage to property charge and four years for the burglary.

The two sentences will run concurrently, but consecutive to his current sentence for the firearm.

The crown had alleged that between June 25 and 26, 2018, at Peruvian Vale, Carter and Robinson, along with Raul Boyde, 29, of Rose Place, and Old Montrose residents Quincy Boyde, 30, and Ivan Durrant, 26, burglarised the Rubis Gas Station and Triples Supermarket and stole a quantity of items valued some EC$580 and caused damage to EC$3,269 worth of property belonging to Harmony Investment.

The accused were arraigned at the Biabou Magistrate’s Court before the matter was transferred to Kingstown Magistrate’s Court, where only Carter and Robinson remaining as defendants by the time the case got to the sentencing phase last Friday.

But when the court indicated that Carter had pleaded guilty to damage to property, the accused man said that was not the case.

Burnett, however, indicated that he had Carter listed as having pleaded guilty to the charge.

Carter maintained that was not the case, but told the court he accepts that he entered the building that houses the supermarket but doesn’t know anything about the gas station.

“Me ain’t get charge for no supermarket,” Carter said, and told the court that he could not speak for his co-accused, Robinson, who was standing next to him in the dock.

The senior magistrate then said that having regard for what Carter was telling the court, he was putting the prosecution to prove its case against him.

“And based on the evidence in this matter, can I convict him for those?” he asked.

There was no immediate response from the prosecutor and the magistrate called on Samuel to respond.

The prosecutor told the court that she was at a loss, saying that she knows that the charge was put to him.

Burnett said the court had a plea recorded but Carter is saying that that had not been his plea.

Samuel said that Carter was contending that he did not damage the door but he entered the property and took some stuff.

“But he has knowledge that there is no charge for him entering the supermarket,” Burnett said.

“So the charge he wants to plead guilty for is not before me,” Burnett said.

Samuel said it seemed “as though the defence is confused as to the charge, the court has a different thing, prosecution is confused”.

The magistrate then asked the prosecution what could the court convict Carter for, based on the evidence.

“Nothing,” the prosecutor said.

“That’s the point,” the magistrate said and told Carter to step down.

After Carter was discharged, the magistrate said he could then speak on the matter.

Samuel said she had received a file that had been transferred from another court.

“It was not a good matter at all, I can tell you that.”

In response, the senior magistrate noted the significance of the development, saying:

“So at least one person who was involved in this matter, he walked free.”

Samuel, however, quoting senior prosecutor Adolphus Delplesche, said prosecutors could only play the hand they are dealt.

She said that is what he had told her that morning after she consulted the Office of the Director of Public Prosecution on the matter.

The magistrate said it is one thing to show footage in court, adding that someone has to give that evidence.

“You can’t show the movie and expect the magistrate to identify A, B, C, D. that’s not my function,” the Burnett said.

The prosecutor told the court that she even questioned the police officer as to why he had charged the three other persons.

“And I still cannot get an answer to this point in time,” Samuel said.

Meanwhile, Burnett said he was not speaking because he was vexed with anyone.

“Far from that. I am not into that. I am just commenting on what was brought before this court.”

He told the accused:

“Mr Robinson, several of you, based on the footage that was shown in this court, were involved in this crime. You are the only one standing before me now, convicted. What was done by all of you could not be right.”

He pointed out that people who are taking an investment risk own the business place, which is located in rural St. Vincent.

Robinson, however, said he was not guilty, and told the court that he had pleaded guilty through “frustration”.

“Stop that now with me. Don’t try that with me,” Burnett, however, told Robinson. “You are a sensible man.”

“That’s the bad thing. You lick up a business place and the businessman gets what? Nothing at all.”

2 replies on “Burglary accused walks amidst confusion over charge”