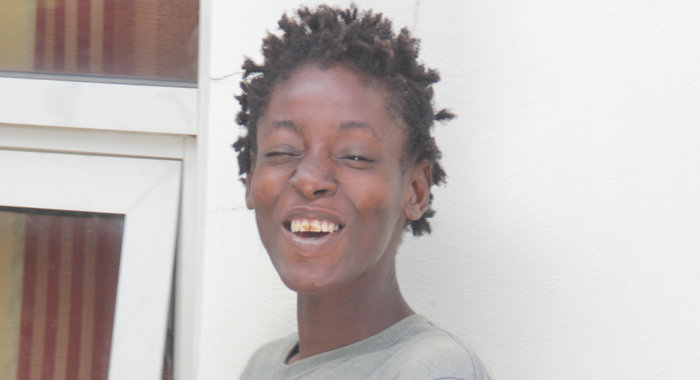 A 25-year-old admitted drug addict who burglarised a supermarket and stole EC$608.81 in alcohol and cigarettes has been sent to prison for three months.

Chief Magistrate Rechanne Browne handed down the sentence on Meshalannie Simmonnette, of Arnos Vale and Edinboro on Wednesday at the Serious Offences Court in Kingstown.

The court heard that about 2:56 a.m. on Aug. 25, the manager of the supermarket received a call from the firm responsible for its security, saying that the alarm system had been triggered.

The firm also telephoned the police. Corporal 758 Lewis and a party of officers from the Criminal Investigations Department in Kingstown responded to the report and visited the scene.

On arrival, the police found that a glass window pane on the southern side of the building has been smashed.

The manager of the supermarket opened the building to admit the police but no one was found there.

A review of the CCTV footage revealed Simmonnette, who is frequent visitor to the parking lot at the supermarket, entering the building around 2:20 a.m. that same day.

The footage also showed Simmonnette removing the items from the supermarket.

On Tuesday, Sept. 3, about 9 a.m., Simmonnette was taken into custody in Kingstown where she was cautioned and interviewed.  She made no statement and was later charged.

None of the stolen items were recovered.

After pleading guilty to the charge, Simmonnette — who is often seen in Kingstown begging for money — asked to be allowed to pay for the items.

The senior magistrate observed that the defendant had not stolen any food items from the supermarket.

“Nothing to fortify your body,” she said, adding that, importantly, she was not seeing any charge related to the smashed window.

Simmonnette said she sold them to “a soldier” (a friend).

The prosecutor asked her which army the soldier belonged to, she said, “Pole Yard”, referring to the community located just east of the decommissioned ET Joshua Airport.

The defendant said she got paid EC$100 for one of the bottles of Hennessy, but ended up getting a hundred plus dollars for all three.

She said she used the money to buy things to eat.

Delplesche asked her why did she not steal things to eat from the supermarket.

“Me ain’t been studying that,” Simmonnette responded.

He asked her if she had taken “thing to push up in your nose too” and Simmonnette laughed in response.

She then admitted to the court that she is a drug addict.

“So then, she needs a little purge,” Delplesche said.

“You agree with me? You need a little time away from that substance. You don’t agree? And you are getting three meals round there,” the prosecutor said, referring to prison.

“So that you will be away from the white lady in the silver dress,” the former detective said, referring to crack cocaine and the foil paper in which it is wrapped for sale on the street.

“You understand me?  Because you have to stop this nonsense,” he told the defendant, adding that he was recommending a custodial sentence.

“Look at your antecedents!” he said.

Meanwhile the chief magistrate told the woman that she did not believe that she had disposed of the items as she had said.

Browne said she believed that Simmonnette had exchanged the stolen items.

The magistrate urged the woman to take care of herself, telling her to apply some skin lotion even.

“Not because ah so,” she told the woman who had a large amount of what appeared to be scars from burns from cigarette butts on her arms, leg and neck.

The magistrate stood the matter down for some 15 minutes to consider a sentence, by which time Simmonnette had fallen asleep and had to be awoken, the second time  since arriving at court that morning.

“You need to slow down,” she said.

Browne told Simmonnette that her record of antecedents is not pretty, adding that they range from firearm possession to damage to property, being her latest conviction.

Asked if she had paid the compensation that the court had ordered in that case, Simmonnette said she thought she had paid and laughed, adding that a guy was supposed to pay and will pay it.

The chief magistrate said she was sorry that the woman had found herself in that position, adding that it is made worst by the fact that she is an addict.

Browne told Simmonnette that she needs “a short, sharp stint to catch yourself”.

She considered favourably the fact that Simmonnette had pleaded guilty, but frowned on the items that she stole

The chief magistrate said the defendant had shown blatant disregard for the property of someone else.

“And you couldn’t care less if Sunday fall on Monday and it’s unfortunate.  These things touch my heartstrings a little. We see the havoc that this substance is really having on our youth,” Browne said after handing down the sentence.