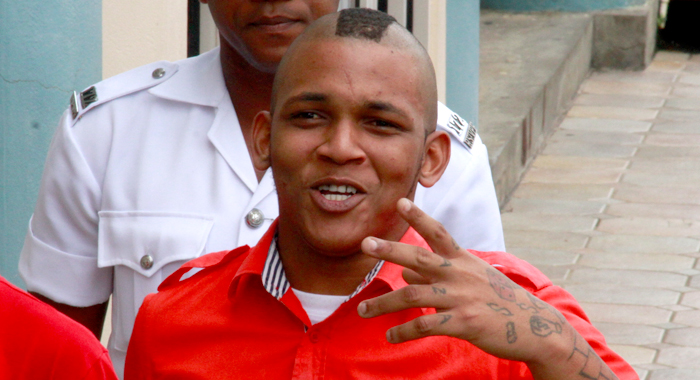 Tevin Williams, in April 2018, sporting what he said was a hairstyle intended to make people “avoid talking to me”. (iWN photo)

A man who beat an attempted murder charge and survived a bullet to the chest in 2018 and was this year accused of setting police on a fellow burglar, was shot and killed in Kingstown Monday night.

Tevin Williams, 22, died on the spot after a masked assailant shot him in the neck around 8 p.m., while he was hanging out with friends under the Melville Street gallery of Ace Hardware.

After being shot, Williams collapsed with his knees wedged into the gutter and his torso falling onto the street.

His feet were still touching the sidewalk when he died.

His death brought to 15 the number of homicides in St. Vincent and the Grenadines in 2019.

Police have classified 12 of those deaths as murder. A coroner’s inquest will be conducted in each of the three other cases to determine whether the deaths are a result of self defence, as claimed.

In 2018, Williams was discharged, at the preliminary inquiry stage, on a charge that, on Jan. 17, 2018, he attempted to murder Shawphil Moore, of Enhams, by shooting him in the jaw.

During that preliminary inquiry, Williams, who was on remand in prison, attended court in April 2018 with a peculiar hairstyle, saying he wanted “people [to] avoid talking to me”.

Williams came to court with the sides of his head shaved off leaving only a two-inch-wide streak of Mohawk-style hair running along the middle.

“Ah wah do it wusser (worse). This is ah pretty hairstyle you seeing right now,” he said when Chief Magistrate Rechanne Browne inquired about his hairstyle.

“Next court date ah coming in short pants, barefoot and a vest,” Williams had said.

Browne had told him that there is a place that the court usually sends people who behave in that way — an apparent reference to the Mental Health Centre.

His conversation with the chief magistrate came after yet another of his outbursts in court while awaiting hearing in his matter.

The chief magistrate had urged Williams to be respectful to the police officers executing their duty in court.

In late November 2018, Lionel “Gubler” George, 25, also of Rockies, was charged that on Nov. 4, 2018, in Rockies, he attempted to murder Williams by shooting him in the chest.

iWitness News is unclear about the status or outcome of that charge.

And in July, Williams’ name featured in the case in which Jeffery Jordon, 27, of Kingstown, originally of Mesopotamia, pleaded guilty to a charge that, between June 22 and 24, he burglarised LMS, a jewellery store located in the PH Veira Building on Bedford Street and stole EC$50,435 worth of jewellery.

Jordon was arrested on July 21, about 6:30 p.m., when police, acting on information in relation to him, went to Melville Street, Kingstown, where they met him on a table near Ace Hardware.

Jordon told the court that Williams was working with the police and called the police to arrest him.

Williams’ run-ins with the law began when he was just a teenager.

For this, he was sentenced to three years in prison.

5 replies on “Man who survived shot to chest last year, killed in Kingstown”