Jail for man nabbed with knife while wanted for stab attack 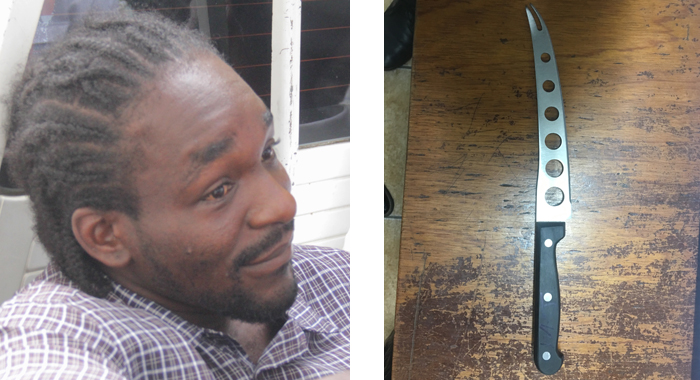 Augustine Jennings, left, and the knife that landed him the nine-month jail term. (iWN photos)

A man accused of a knife attack that resulted in another man being in hospital with a lung injury has been jailed for possession of a knife at a fete.

On Monday, at the Serious Offences Court, in Kingstown, Augustine Jennings, 31, of Lowmans Hill was jailed for nine months for possession of the weapon.

He had pleaded guilty to a charge that last Friday, Sept. 13, at Campden Park, in a public place, to wit the Campden Park Public Road, he had in his possession an offensive weapon, to wit, a knife.

The facts of the case are that about 11:30 p.m. last Friday, Police Constable 760 John was on mobile patrol about the Questelles district.

On arriving at Lashum Bar in Campden Park, he realised that there was a dance taking place there.

At the activity, John saw Jennings, who was a person of interest in connection with a knife attack earlier that day.

John informed Jennings that he was wanted for questioning in connection with the matter and requested a search of his person.

During the search, the police officer found the knife in Jennings’ waist.

The court heard that there was a crowd of a reasonable size in the area where Jennings was met with the knife.

In mitigation, Jennings told Chief Magistrate Rechanne Browne that he was walking around with the knife in case he came upon anything during his journey.

In his submission, Senior Prosecutor Adolphus Delplesche asked how could one explain going to a dance at 11:30 p.m. with a knife of that nature in their waist.

“What are you preparing for? War?”

The blade of the knife has several circles cut into it and has two prongs at the tip and appeared to have been manufactured that way.

The prosecutor said he saw no mitigating factors in the case and that he was recommending a custodial sentence.

In handing down the sentence, the chief magistrate noted that the maximum penalty was nine months in prison and that because he had pleaded guilty, Jennings was entitled to a one-third discount on his sentence.

Browne, however, said that aggravating in the case was the fact that the offence had taken place in the public road, in a crowed dance area, and that the act was committed while Jennings was of interest to investigators regarding a knife attack.

She saw no mitigating factors.

Meanwhile, Jennings was not required to plead to an indictable charge that last Friday, at Lowmans Hill, he caused grievous bodily harm with to Garfield Nero of Campden Park, intending so to do.

The charge was initially laid summarily, but Delplesche applied for an amendment to have it laid indictably.

Before the chief magistrate handed down the prison sentence for the knife, Delplesche had argued against bail for Jennings in connection with the indictable charge.

He said that Nero was still in hospital with injuries to his upper left side, including to his left lung, and one to his left arm.

The senior prosecutor said that doctors had inserted a tube to remove extra fluid from Nero’s lung.

He said that the investigator would update the court on Nero’s progress.

Jennings is scheduled to return to court next Monday, Sept. 23, for bail review.