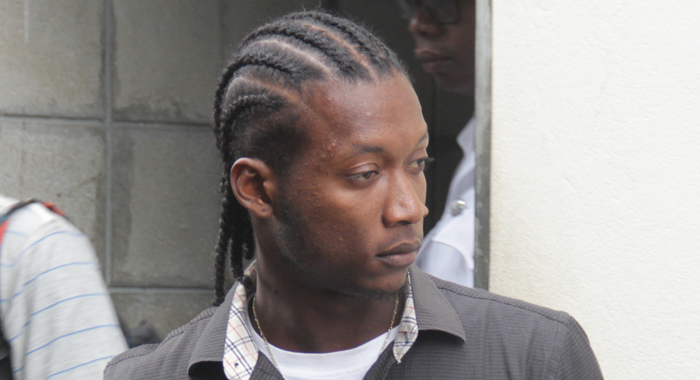 A 20-year-old Cane End man was, on Monday, led away from the court in handcuffs after he was unable to come up with EC$1,900 in fines for driving without a licence and driving an unlicensed and uninsured vehicle.

Ronnel Nanton was also barred from holding or obtaining a driver’s permit for the next nine months.

He pleaded guilty to charges that last Saturday, Sept. 14, at Cane End, he drove P5760 without being the holder of a driving permit.

About 3:30 p.m. Saturday, Police Constable 759 James of the Mesopotamia Police Station was on duty about the Cane End area when he saw a white and green Toyota Starlet car being driven with no front registration plate.

He questioned the driver about the registration plate, and the driver replied, “I’m just going to take the car to the garage.”

James asked the driver for his driving permit and he said he did not have any.

He further told the police officer the car was neither licenced nor insured because he was just fixing it up.

“What a day it would be if everyone thinks they can just drive without a permit; vehicle without insurance.”

She said the sanctions imposed by law are stiff for a reason.

In his submission on sentencing, Senior Prosecutor Adolphus Delplesche said that such offences seem to be becoming prevalent in St. Vincent and the Grenadines and, as always, the court has to deal with it.

He said, however, that Nanton is a first-time offender and, as such, he would not recommend a prison sentence.

Delplesche, however, said that that Nanton should be made to feel the penalty in his pocket.

“You can’t be driving like that,” the senior prosecutor said.

In handing down her sentence, the senior magistrate said that the offences are serious.

She said that there would be no recourse if Nanton had caused injury to others or himself.

For driving without a permit, Browne ordered Nanton to pay the court EC$600 forthwith or spend six weeks in jail.

He was ordered to pay EC$400 forthwith or spend four weeks in jail for driving an unlicensed vehicle.

And for driving an uninsured vehicle, the fine was EC$900 forthwith or nine weeks in jail.

One reply on “Unlicensed driver ordered to pay $1,900 in fines”