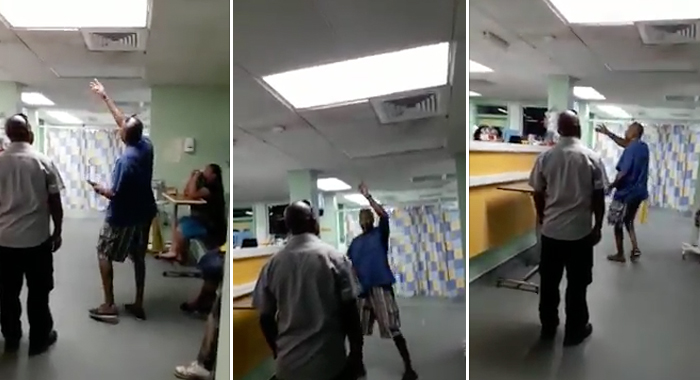 A composite image taken from screen shots from the video.

The doctor who is seen in a social media video complaining about fungus in the emergency room at the Milton Cato Memorial Hospital is standing by his comments.

Michael Goodluck told iWitness News on Tuesday there are health implications of being in a room with fungus, asbestos, mould, dust, or similar items.

“Those things, you inhale that, it can compromise your airway,” he said, adding that when he was in medical school a colleague died after inhaling mould and fungus in her rose garden.

He said these pathogens are especially dangerous when people have respiratory conditions and their immune system is challenged.

“You can’t see these things with your naked eyes,” Goodluck said, adding that not only the patients but also workers at the emergency room are at risk.

“And this is not just for casualty — any environment where you have microorganisms that can be potentially unfavourable to people’s health. The outcome could even be fatal. It’s just not healthy,” the doctor said.

In the 51-second video, recorded last Friday, Goodluck, who is District Medical Officer for the Calliaqua district, complains to Elroy Boucher, a maintenance worker at the hospital, who is not heard saying anything in the video.

Boucher is also president of the Public Service Union.

“As I talk here, I inhaling some,” he further said, referring to the fungus.

“No, Boucher, look at this and when you talk the truth they come and talking ‘bout you try to make the prime minister look bad and all kinda stupidness. Look at that!

“Look at fungus and Vincentians for the sake of Labour love, they ‘fraid to speak,” said Goodluck.

“Labour Love” was the slogan that the Unity Labour Party used during the campaign for the December 2015 general elections, in which it was elected to a fourth consecutive term in office.

“This is ridiculous! This is an emergency room where you come to save lives. Look at the place. Watch!

“I come in here to get a room to do dressing, the room so stink. Look! Look!” he said, pointing at the floor.

“I see cotton on the ground that wipe somebody sore foot and they throw — I don’t know how it reach dey. All this kind of nonsense.

“Look! Look! I hear people call in on the radio I say they have to be joking. I come down her for myself.

“And we’re saving lives? Where? In here? Alyo making bare sport,” he said and walks away at the video ended.

The video was apparently recorded by a woman, whose voice is heard saying that the she was recording the fungus and no one else.

Goodluck told iWitness News that the video was recorded on Friday, when he went to the accident and emergency department of the nation’s main healthcare facility to do a surgical procedure on a child.

“When I got there, I asked the nurse for some plaster to repair the surgical wound and I was told there was no plaster,” he said, adding that he asked the nurse if she was joking and she said no.

Goodluck said he was shocked at the state of the accident and emergency department of the hospital.

“I was shocked at the state of casualty. It was smelly; it wasn’t looking very clean,” he said, adding that the room in which he performed the procedure was so smelly that a nurse had to spray her personal perfume inside to make it  “more favourable for our use”.

Goodluck said that while waiting for the nurse who was trying to get him some plaster, he observed “this black vegetation on the roof, especially over the asthma bay.

“But, in any case, it’s inoculation that should not be there in a health institution and persons were echoing the sentiment that it has been like that for a while and nothing is being done about it.”

Goodluck said that Boucher happened to be in the area and he drew it to Boucher’s attention.

The doctor said he did not know that he was being recorded but it really doesn’t matter.

“I spoke because I am a healthcare provider and I take health seriously and in an emergency room especially in the roof immediately over the asthma bay, you have that state of what was there, it is not conducive at all to good health.”

He said that his comments were not about politics.

“Nobody attacking the minister or anything. This is just that if you see something that is not right and is not good for healthcare or otherwise, you should intervene accordingly. And who say you can’t talk about things to bring about change.”

Asked what he would say to people who accuse him of being unprofessional in making the comment on duty.

“How could that be unprofessional? They are speaking without the benefit of intellect,” the physician said.

He said that most of the comment that he saw on Facebook agreed with what he did.

“The persons who speak like that are probably politically inclined in terms of their support for the ULP.”

Told that people might similarly accuse him of being anti-ULP in the manner in which he chose to express himself, Goodluck said:

“No, that is not true, that is what I am gelling you. Anytime at all you say something that is the first thing. They try to politicise it and say something. If I had said something glorifying the efforts of the ULP they would have said otherwise. The comments would have been different.

“Why should we be afraid to speak? Why should that be? And that is probably why a lot of people are afraid to speak, because when they speak for their rights, or something they say is unfavourable, first thing they are going to say, you are doing it because you don’t like the government or certain powers that be, which is totally erroneous.”

In July 2016, Member of Parliament for South Central Windward, Saboto Caesar donated two fans to the Lowmans Windward Clinic after a recording emerged of Goodluck telling persons to join together and ask the government to fix the road leading to a clinic and buy fans for the facility.

In August 2016, Prime Minister Ralph Gonsalves read at a press conference what he said was a transcript of a recording that he said a young woman had made two weeks earlier when she went to see Goodluck at a state-owned health facility.

“And all he begins with is a bare anti-Ralph politics,” Gonsalves had said, adding that the young woman had used her phone to record a part of the conversation.

However, it turned out that Goodluck had, in fact, sent the recording in a private conversation to the young lady, who, as his friend, had asked for his advice on dieting to deal with a medical condition.