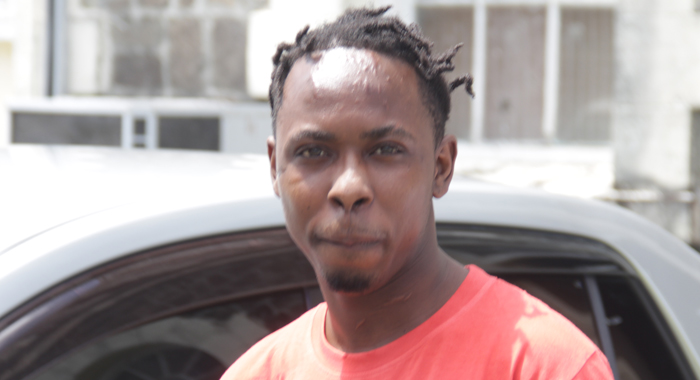 Terrano Samuel on his way back to prison on Wednesday. (iWN photo)

The Troumaca man who was on Sept. 11, 2018 caught on surveillance camera assaulting a woman in Indian Bay has pleaded guilty to charges of attempted rape, abduction, indecent assault, and assault occasioning actual body harm.

Terrano Samuel, who was 19 at the time, pleaded guilty when he was arraigned before Justice Brian Cottle at the High Court in Kingstown on Wednesday, as the criminal assizes opened.

Renee Simmons, who was representing the Crown in the case, asked that the hearing of the facts and sentencing be adjourned.

Simmons further asked that a social inquiry report be prepared on the defendant.

Samuel, who is also known as Tone Boss, pleaded guilty to charges that on Sept. 11, 2018, at Indian Bay, he attempted to rape a 32-year-old woman.

iWitness News is withholding the woman’s name because of the nature of the crime committed against her.

Samuel further pleaded guilty to a charge that on the same day and place, he, by force, compelled the woman to go from the road to the Old Casa de Columbus Hotel at Indian Bay.

Justice Cottle put the sentencing hearing for Oct. 18, 2019 saying that the Social Welfare Department has asked to be given at least one month to prepare social inquiry reports.

The attempted rape charge, the most serious of the charges against Samuel, carries a maximum penalty of life imprisonment, which is a notional sentence of 30 years.

However, persons who plead guilty at the first opportunity are liable to a discount of up to one-third on any sentence that the court imposes.

The sentence is also adjusted for the mitigating and aggravating features of the case and the offender.

The video of the attack — circulated on social media ahead of Samuel’s apprehension — shows a man, later identified as Samuel, loitering near a building near the beach at Indian Bay.

As the woman approaches the building from the direction of the beach, the man runs up to her and attempts to grab her.

The woman fights back but the man manages to drag her to another section of the building, out of view of the CCTV camera that recorded the incident.

A few seconds later, the man walks back into view of the camera with the woman a little behind him.

The woman, however, goes back out of view as she went back in the direction in which the man had dragged her.

The video ends at this point.

Also in September 2018, Samuel was charged with criminal trespass, wounding and indecent assault.

Police have alleged on Aug. 6, 2018 about 2 p.m., at New Montrose, Samuel, armed with a knife, entered the dwelling house of a 90-year-old retiree and indecently assaulted a 53-year-old woman “by accosting her inappropriately”.

Police have further alleged that in the process of carrying out the offence, Samuel stabbed the 53-year-old woman on the left leg with a knife.

iWitness News is unsure about the status of those matters before the court.