Karen is a slow-moving storm; SVG urged to prepare 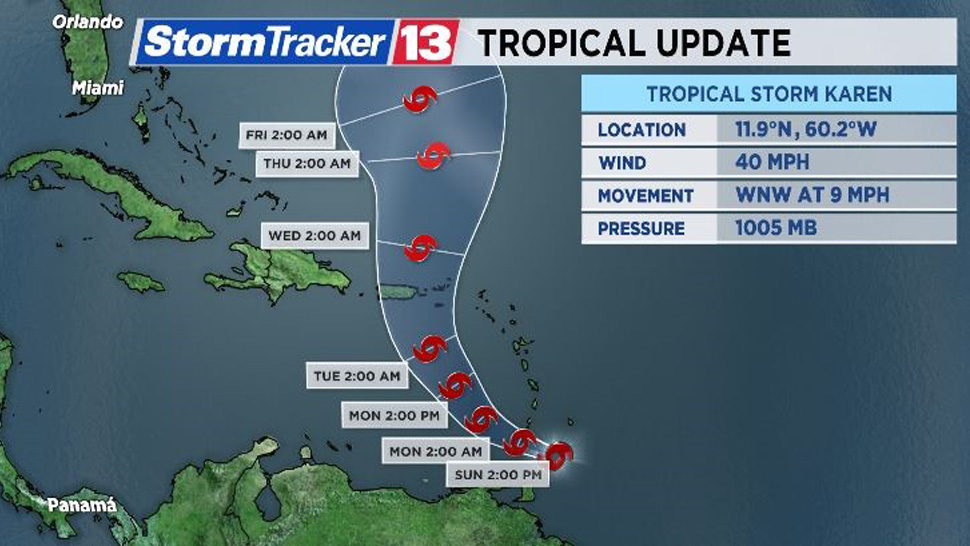 Head of the St. Vincent and the Grenadines Metrological Services, Billy Jeffers has noted that tropical storm Karen which is expected to begin affecting the country later today (Sunday) is a slow-moving cyclone.

Officials have ordered the shutdown of businesses and non-essential services, until the all-clear is given.

Jeffers, speaking on radio Sunday morning, said that the storm was moving at just nine mile and hour and is likely to be around for some time.

He said that the storm is expected to result in significant amount of rainfall, with two inches having fallen overnight.

SVG is under a tropical storm warning, which came into effect at 8 a.m.

This means that tropical storm conditions are expected in the next six to 12 hours, Jeffers said, adding that Karen was, at 8 a.m., 100 miles south southeast of SVG.

Jeffers said that centre of the storm is expected to past between Canouan and Mustique.

Speaking on the same programme, Michelle Forbes, head of the National Emergency Management Organisation (NEMO), said the agency has been in contact with its committees in Canouan and Mustique and was trying to make contact with Mayreau.

The relevant officials in each of the Grenadine islands have been instructed to start mobilising.

Forbes said that while the Grenadines will be the first to be impacted, NEMO is urging all residents of SVG to prepare for the passage of the storm.

Shelter managers have been asked to activate shelters and NEMO appealed to all persons to adhere to shutdown procedures.

NEMO is expecting all business to close and non-essential services to not operate until the storm and passed and officials have given and all-clear.

And, acting Prime Minister Montgomery Daniel said that the government is seeking the cooperation of all residents of SVG to be responsive and to adhere to the advise of NEMO.

“So, please we must not wait before it is too late. Let us act now,” Daniel said and expressed hope that SVG will again be spared the brunt of the storm, even as he noted the importance of preparedness.

Forecasters say Karen is expected to result in brisk surface winds of 25 to 30 knot (45 to 55kmh) with gusts to storm force and pockets of moderate to heavy showers are anticipated with rainfall accumulations of 100 to 150mm (4 to 6 inches).

Isolated higher amounts of rainfall are possible as Karen tracks west-north-westwards into the Caribbean Sea.

A flash-flood watch remains in effect.

Persons living in areas prone to flooding, land-slippage or lands-slides, should be prepared as such rains may cause flash flooding and land-slides, especially in mountainous areas.

Deteriorating sea-conditions are also expected with south-easterly swells of 3.0 to 4 metres (10 to 13ft) and possibly 4.5 metres (15ft).

The high-surf advisory and small-craft warning also remains in effect.

One reply on “Karen is a slow-moving storm; SVG urged to prepare”