Bank workers cry ‘corporate rape’, sick out over back pay 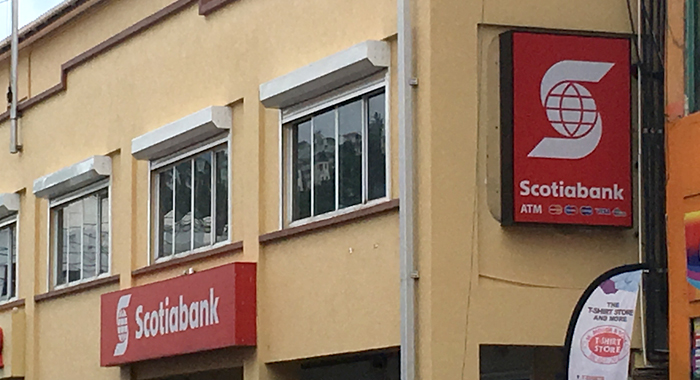 Scotiabank workers in St. Vincent and the Grenadines are expected to call in sick, on today (Tuesday), for a second consecutive day, in an attempt to pressure the bank to pay outstanding wages dating back to 2008.

An employee at the bank, who spoke to iWitness News on condition of anonymity, accused the bank of “corporate rape”.

The employee said the bank’s staff worked from 7:45 a.m. to 4:45 p.m. with one hour’s lunch, although, under the labour laws passed in 2008 they should have worked for eight hours, including one hour’s lunch.

“It is time we play the media card because Scotiabank is getting away with rape, slavery. I think it is corporate rape,” the employee said, adding that some employees could be entitled to tens of thousands of dollars in back pay.

Meanwhile, Joseph “Burns” Bonadie, whose Commercial, Technical, and Allied Workers Union represents the Scotiabank employees in SVG, told iWitness News on Monday that he was not aware of a ‘sick out’ at the bank.

“I don’t know nothing about no sick out,” he told iWitness News, but said that the bank had contacted him saying that about 75% of the workers had called in sick.

In explaining the labour issue at the bank, Bonadie said the Wages Council Act of 2008 regulates work for certain categories of employees.

There was, however, a question as to whether banks were covered under the act, which was revised in 2017, with the only the changes relating to wages and not hours of work.

Bonadie told iWitness News that bank workers earn far more than the minimum wage, but the hours of work in the revised law remained the same, namely, eight hours per day, inclusive of a lunch hour.

He, however, said that in banks in SVG, employees were working nine hours a day.

The union put it to the bank that they had to pay the employees for the additional one hour per workday, commencing in 2008.

Bonadie’s union met with all the banks, which attempted to invoke the limitation clause, constraining the number of years for which the workers could claim additional pay.

The banks argued that the period for which they owed back pay was from 2017, when the order was revised, and not 2008.

Bonadie said that his union met with Republic Bank, which will take over the contract and the employees at Scotiabank and Republic Bank has made it clear that they will not inherit the overtime payment issue.

“In other words, it (the wage issue) must be settled and we signed a memorandum of understanding to that effect, that nothing will be going over.”

Bonadie told iWitness News that the banks have not provided the legal opinion that they said they would obtain on the issue.

He, however, said Attorney General Jaundy Martin has provided his union with a legal opinion.

“And his legal opinion, in my view, I think he wanted to do a balancing act between the bank and union. In one part, he said it could apply…”

Bonadie said Scotiabank agreed that the minimum wage order applies and this was included in the new collective bargaining agreement.

“Now, they agreed to pay from the commencement of the collective agreement, which was from 2018.”

Bonadie said the union rejected that offer and last week Scotiabank said they were prepared to pay the additional time from 2017, when the new order was published.

The union boss, however, noted that the new order included the same hours of work as the 2008 statute.

He said the union also found the bank’s subsequent proposal unacceptable and is demanding that employees be paid for the six years ending 2017.

He said that after a conference call on Friday, during which he rejected the bank’s offer to pay from 2017 onward, he met with the Scotiabank employees.

He said he then wrote to Scotiabank saying that it must honour the agreement it signed.

Bonadie said that he got a call Monday morning from the bank’s Jamaica office informing about employees calling in sick in St. Vincent.

He said he also got a call from the labour commissioner saying that the bank had called the Minister of Labour and wanted a meeting with the bank and the union.

He said he could not comment on iWitness News’ information that the staff was planning to call in sick on Tuesday also.

Bonadie, however, said that the bank told him last week that they were exiting SVG on Oct. 31 and Dominica, St. Lucia, and Grenada on Sept. 30.

“And to my consternation, on Friday or Thursday, I was told that the manager had a meeting with the staff to inform them that the bank was exiting at the end of September.”

Bonadie said he immediately called the human resource personnel who told him it seems that the bank was moving at a faster rate and Bonadie had information that they did not have.

“And I am not doubting them,” Bonadie said, adding that the bank might be moving in this direction having secured the approval of the Eastern Caribbean Central Bank for their acquisition by Republic Bank.

“But what made it even worse in my view, in terms of our relationship, is that the bank in Trinidad sending in people for training on Thursday.

“All of that, they never informed me. So I say, well, if that is the case, they have to be crazy. So our position is that if they are going to exit, I told the shop steward at the bank to inform the manager that nobody putting on Republic Bank uniform. They have to settle. So that was conveyed. So they took objection to me giving that message to the shop steward,” Bonadie said.

The trade unionist told iWitness News that he wrote the bank a letter saying that the union is of the view that the important matters of money due to staff was being side-lined and it thought that finalising that issue would have paved the way for a smooth transition.

The letter further said that in light of the foregoing, the union was urging the bank to ensure that the MOU is honoured, Bonadie said.

“The union is surprised that coming to the end of our cordial relationship the bank is now wavering on its stated agreement and commitment. It is difficult for our members to participate fully during the transition period when they are owed money from the exiting bank,” Bonadie quoted the letter as saying.

The letter said that the union’s concerns were raised with the country manager through the shop steward, as is customary in forging a good relationship.

“It is now difficult for the union to reconcile your current actions with your stated commitments and the union’s compromised position,” Bonadie said, adding that the union had compromised in saying it would take the limitation clause into consideration.

He pointed out that while the issue with Scotiabank is coming to a head because it is exiting the market, the issue remains with all other banks in St. Vincent.

Bonadie, however, said that his union was mindful of the cost to the banks, noting that Bank of St. Vincent and the Grenadines has over 200 employees.

“As a trade unionist, I am prepared to compromise. But I am not going to be dealing with all of them one time. I am dealing with the one that is leaving,” Bonadie told iWitness News.

When iWitness News contacted manager of Scotiabank in St. Vincent, Pam Herbert-Daniel at 2:34 p.m. Monday, she said she was expecting a call at 2:30 p.m. and asked that we call back one hour later.

We left with Herbert-Daniel a cell phone number indicating that she could call any time with any comments her bank might have on the issue.

We have not been able to reach Herbert-Daniel again up to the time of publication.

6 replies on “Bank workers cry ‘corporate rape’, sick out over back pay”