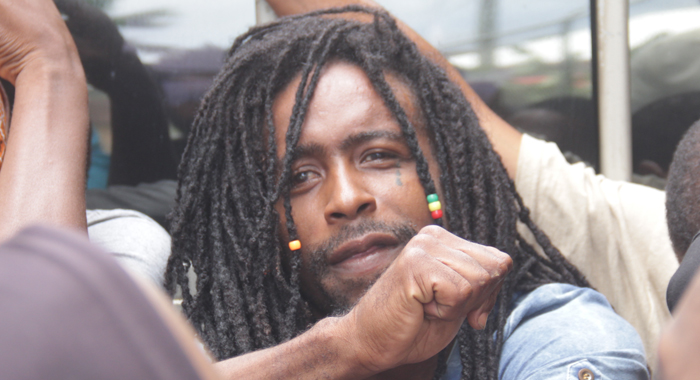 A man who, in August 2018, survived a stab wound by his mentally ill father, who died that same day after being shot by police, has been jailed for snatching a child’s cell phone.

On Monday, Stilson Harold Jr. told the Serious Offences Court in Kingstown that after snatching the mobile device last Saturday, he realised it was not his but he ran after a gunman came after him.

Harold, 33, of Vermont, said he was not sure if the gunman was a police officer.

He mimicked the sound of the racking of a gun and told the court that after hearing that sound, he feared that he would be shot, and he decided to stop running.

“Me nah bin do that fuh spite,” said Harold, who would escape while on his way to the police station from his capture by the bystander who apprehended him after his action against the child.

But Senior Prosecutor Adolphus Delplesche did not buy the man’s story.

“The Mighty Shadow said the bass man in he head. The gunman in your head. You are a thief! Your antecedents show that! Custodial!” Delplesche said in a deft response to the man’s plea in mitigation and the Crown’s submission on sentencing.

The court heard that about 9 a.m. last Saturday, Jacobs, a 14-year-old student, was seated on the rear seat of a van parked near the St. Mary’s Roman Catholic School on North River Road, Kingstown.

The student had the cell phone on his leg and the windows on either side of the vehicle were open.

Harold sneaked up from the back of the vehicle, grabbed the child’s cell phone and ran in the direction of Gaymes Book Store located on the corner of North River Road and Tyrell Street.

The child exited the van and began shouting, while pursuing Harold, “Look the man thief my phone!”

As Harold fled, the phone fell and a bystander who knows Harold well asked the child what had happened, then gave chase and apprehended Harold.

However, while the onlooker was taking Harold to the police station, Harold was able to escape.

Police later apprehended him after the child and his mother filed a report.

When cautioned, Harold told police, “Me tek the youth phone because somebody take mine wha’ look like that.”

In mitigation, Harold the court that he made a mistake because the child’s phone looked like his.

In handing down her sentence, Chief Magistrate Rechanne Browne said that Harold had targeted a vulnerable child.

She further noted that he had about nine previous convictions for theft and burglary.

The magistrate, after considering the aggravating and mitigating features of the case, arrived at a sentence of five months.

She granted Harold the one-third discount for a guilty plea and rounded off the sentenced to three months in prison.

On Aug. 14, 2018, Harold’s father, Stilson Harold Sr. bled to death in hospital where he was taken after police shot him in the leg.

The younger Harold went to the Vermont Police Station — located at Penniston — with a bandage to his neck and told officers that his father, who had a history of mental illness, was behaving violently and had stabbed him in the neck with a piece of steel.

Police responded and met the father behaving in a violent manner and threatening them with a cutlass.

They summoned back up and later shot him in the leg after which they took him to the Milton Cato Memorial Hospital, where he bled to death as his violent behaviour there prevented the hospital staff from attending to him, police said.