Canadian, Vincies charged with $385,000 worth of cocaine, ganja 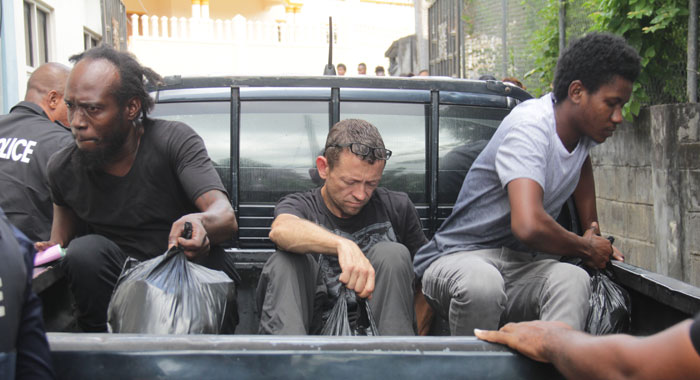 Three men, one Canadian and two Vincentians have been arrested and charged with possession of a quantity of cocaine and marijuana, which police say have a street value of EC$385,200.

iWitness News understands that the bust, which occurred in Dorsetshire Hill on Monday, Sept. 23, is the culmination of a weeks-long investigation involving multiple teams from tactical units of the police force.

The three men, Jomodean Alexander, a 21-year-old mechanic, of Sion Hill, 38-year-old Sion Hill mason Glenlyn Lee, and Lonnie Raymond James Wilson, a 47-year-old waiter, of Canada, were not required to plead to the indictable charges when they appeared before the Serious Offences Court in Kingstown on Thursday.

Senior Magistrate Rechanne Browne read to the three accused men charges that, on Sept. 23, at Dorsetshire Hill, they had in their possession 2,020 grammes (4.45 lbs) of cocaine with intent to supply it to another, and that they had the drugs for the purpose of drug trafficking.

Alexander and Lee are jointly charged that they had in their possession 2,364 grammes (5.2 lbs) of cocaine with intent to supply, and that they had the drugs for the purpose of drug trafficking.

The Vincentian duo is further charged with possession of 732 grammes (1.61 lbs) of cannabis with intent to supply and that they had the drug for the purpose of drug trafficking.

Senior Prosecutor Adolphus Delplesche objected to Wilson’s bail, arguing that he is a flight risk, as he is a Canadian with no known ties to St. Vincent and the Grenadines (SVG).

He said that the Crown fears that if Wilson is granted bail, he would abscond and not return for a trial.

Delplesche did not object to bail for the two Vincentians.

He, however, asked that should bail be considered, the court demand sufficient surety and order that the men to surrender their travel documents.

The senior prosecutor also asked the court to order that the men report to the Central Police Station and seek the permission of the state to travel, and that stop notices be placed at ports of entry and exit.

iWitness News understands that police made the bust as Wilson was about to leave an apartment in Dorsetshire Hill for the airport.

Well-placed sources say that police had already cleared the man after conducting the search of his belongings.

But, just as a taxi arrived to take Wilson to the airport, a senior officer was not convinced that the searched had been thorough, sources say.

The officer is said to have used a knife to puncture a suitcase, resulting in a whitish substance resembling cocaine falling from it.

Police are said to have found packages of cocaine in false compartments in two suitcases.

Cocaine was also stuffed into a game console found at the apartment, iWitness News was reliably told.

Wilson was denied bail and was remanded into custody until Nov. 28, for a preliminary inquiry.

Alexander and Lee were granted bail in the sum of EC$100,000 each. They were ordered to surrender their travel document and seek the permission of the court to leave St. Vincent and the Grenadines.

The court also ordered that stop notices be placed at ports of entry and exit and that they report to the Central Police Station in Kingstown on Mondays, Wednesday and Fridays.

One reply on “Canadian, Vincies charged with $385,000 worth of cocaine, ganja”