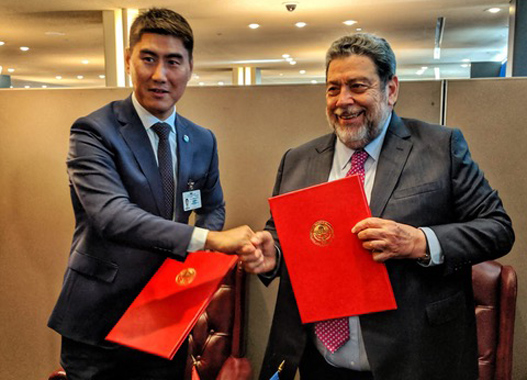 St. Vincent and the Grenadines has established diplomatic relations with three new states, namely the Republic of San Marino, Ukraine, and Kyrgyzstan.

The signing of agreement establishing diplomatic relations took place during a bilateral meeting between SVG Prime Minister Ralph Gonsalves and Foreign Minister of San Marino Nicola Renzi on the sidelines of the UN General Assembly in New York.

Members of both national delegations witnessed the signing and offered congratulations as the leaders displayed the signed documents, the Office of the Prime Minister in Kingstown said in a statement on Thursday.

“The establishment of diplomatic relations with these new countries is a testament to the principled and progressive foreign policy of the government of Saint Vincent and the Grenadines that allows this country to engage nations regardless of their ideology,” the statement said.

“The government and people of this country look forward to working with these new allies to advance the principles of the charter of the United Nations and working towards the achievement of global peace and security,” the statement added.