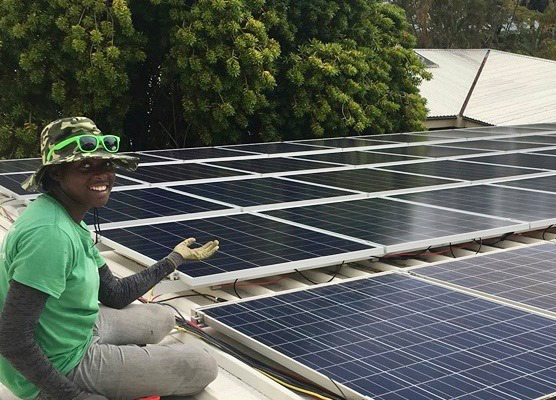 It took four months longer than anticipated, but they have done it.

The school’s off-grid system now consists of an additional 48 new solar modules (panels), bringing the total photovoltaic array to an output of 32 kilowatt, up from the original 18.

This means that RVA’s battery bank of 120 batteries can now be fully charged every day, even when it is cloudy.

What’s more, RVA’s grid tied system has been connected to the national grid, operated by VINLEC, the state-owned commercial producer of electricity in St. Vincent and the Grenadines.

RVA’s system, which was installed by its teachers, students and employees, has been    tested and approved by the relevant building authorities.

“The whole installation has been a great learning process, educational and empowering project for the people involved,” said Stina Herberg, director of RVA.

“We are estimating to produce 230-250 kwh per day on average.  The academy will be able to save money on its electricity bill, which can go towards other climate compliance projects and scholarships to Vincentian students who would like to join another kind of school — the Richmond Vale Academy,” Herberg said, hinting at the school’s curriculum, which focuses on sustainable development.

“We welcome visitors who are interested in learning more about solar and renewable energy solutions as well as ecological farming,” she said.

RVA estimates that the savings earned from switching to 100% renewable energy would recoup the overall investment in less than four years.

RVA had hoped to achieve 100% of its electricity from renewable energy sources, solar power in particular, by May 2019, but experienced some challenges in meeting that deadline.

Under the programme, the institution has trained hundreds of students to take action as well as inform thousands of people globally on the effects of global warming and climate change.

The programme was launched after a drought at the beginning of 2010 followed by Hurricane Tomas late that year and flash floods in 2011.

Herberg said that having the school transition to the use of 100 per cent renewable energy aligns with the energy policy for the government of SVG, which is pivoting to more renewable energy.