NDP promises to reduce VAT to 13% 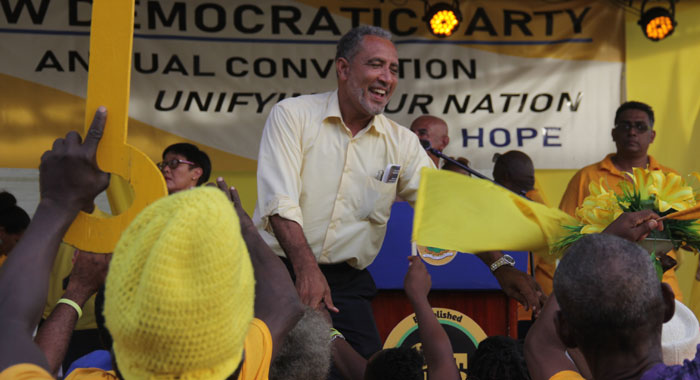 The main opposition New Democratic Party (NDP) says it will reduce VAT from 16% to 13% if elected to office at the next general elections, constitutionally due by March 2021, but widely expected by December 2020.

Leader of the Opposition, Godwin Friday, who is also president of the NDP, told the party’s convention in Arnos Vale on Sunday that this is one of the policies the NDP would implement to “relieve the heavy tax burden” on citizens.

“Vincentians are being taxed more and more every year. As the government’s debt increases, so too will taxes.  The VAT, by various means, was increased three years in a row following 2015 elections,” he said.

On May 1, 2017, Vincentians began paying VAT at the rate of 16%, one percentage point higher than when the tax was introduced a decade earlier.

In announcing the increase, then Minister of Finance, Prime Minister Ralph Gonsalves said the increase was to help his government offset the cost of natural disasters.

The 1 per cent levy on consumption was to be used to capitalise the Contingencies Fund, which was being established pursuant to Section 72 of the Constitution, Gonsalves had said.

The increase in VAT came one year after the government began levying VAT on a number of basic food items, including packaged rice for retail sale; table and cooking butter; brown sugar; and whole chicken and chicken parts, except chicken back, neck and wings.

But Friday told party supporters on Sunday that SVG has the highest taxes and the lowest wages in the nine-member Organisation of Eastern Caribbean States.

“No wonder we feel so poor!” he said, adding, “We don’t have to be poor; it is Ralph Gonsalves and the ULP who are making the country poor.

“I believe we can do better. And will do better.  To relieve the tax burden of people and free up money in the hands of consumers, we will reduce the VAT from 16% to 13%,” he said.

Friday, who is his party’s shadow minister for tourism, said that the NDP knows that taxi and bus operators are struggling with high cost of vehicles and spare parts.

“We hear you and will help you,” he said.

The opposition leader also spoke to stakeholders in the construction sector.

“The local contractors also are feeling the pressure of living under this government, especially as government often behaves like a bandit and fails to pay contractors on time or [not] at all for their work.

“We will assist by reducing the duties and taxes associated with purchasing heavy equipment and other tools needed to do your work.  We want you to be efficient and productive so you can serve the nation well and compete successfully for work in the other OECS countries,” he said.

Friday made a case for a national development bank, saying the lack of or scarcity of credit is a serious obstacle to development in SVG.

“The commercial banks see most business ventures as too risky and more often than not say ‘No’ to their loan applications,” adding that this is the case although financing is the lubricant that makes an economy move and credit is the most accessible form of financing.

“But, tell that to a farmer or fisherman, or small manufacturer or agri-processor in SVG, who has been turned away repeatedly by the commercial banks.  They need a hand up.

“We will create a specialised bank, a National Development Bank, to eliminate the credit problem and make financing more accessible and more affordable for local businesspeople, especially small businesses,” the opposition leader said.

“The main objective of the bank would be to promote economic development by fostering investment and business development in SVG,” he told the convention.

Friday said the bank will be able to provide cheaper loans to businesses, since its aim would not be profit for shareholders, but to serve the national interest by promoting economic activity and business development.

“It will also provide financial and technical assistance in the areas of agriculture, fisheries, tourism, industry, housing, small business development and human resource development,” he said.

The opposition leader said that other CARICOM countries including, Grenada, St. Lucia, Antigua and Barbuda, St. Kitts and Nevis, Jamaica, and Trinidad and Tobago have development banks.

“The St. Vincent and the Grenadines Development Bank will contribute immensely to the economic development of the country,” he said.

Friday said that funding for the development bank will come from a number of sources, including the citizenship by investment (CBI) programme which an NDP government intends to introduce in SVG.

“This will keep the cost of borrowing down,” Friday told the rally at which Nancy Charles of the ruling United Workers Party in St. Lucia spoke of the benefits of the CBI programme to her country.