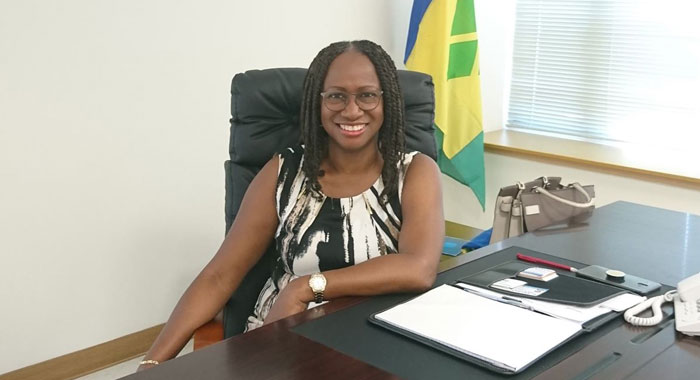 St. Vincent and the Grenadines Ambassador to Taiwan, Andrea Bowman at her office in Taipei. (Photo: Zuleika Lewis)

TAIPEI, Taiwan — Ambassador of St. Vincent and the Grenadines (SVG) to Taiwan, Andrea Bowman, has assured Vincentian students here that, as it stands, they have nothing to worry about even as Taiwan lost two more allies last month.

The Solomon Islands and Kiribati, which had accumulated over 50 years of diplomatic ties with Taiwan, switched diplomatic allegiance to China, leaving Taipei with just 15 formal diplomatic partners.

The severing of ties between the Solomon Islands and Taiwan ended a 36-year relationship, while Kiribati, ended 16-years of diplomatic ties.

General elections in SVG are constitutionally due in March 2021, though widely expected by next year, and leader of the opposition New Democratic Party (NDP) Godwin Friday has reiterated his party’s commitment to switching diplomatic recognition to China.

In the interim, Friday said, the NDP will continue to pay Taiwan and its envoy in Kingstown the relevant courtesies as a formal ally of SVG.

However, the ruling Unity Labour Party of Prime Minister Ralph Gonsalves had restated its commitment to Kingstown-Taipei ties.

Here, President Tsai Ing-wen will face the Taiwanese electorate in presidential elections in January, amidst rising tension with China.

This followed eight years of rapprochement between Beijing and Taipei, when Ma Ying-jeou of Taiwan’s pro-unification Kuomintang was in office.

And, Bowman said that while she is hoping for “certain things” when Vincentians go to the polls, she wishes that the friendship between both countries will remain regardless of the outcome.

“Parties are entitled to their own perspectives as it relates to diplomacy and things like that. But I do hope that the 38 years of friendship that we have had with Taiwan, I hope that would be respected,” said Bowman, a retired educator, who is in her first foreign service post.

SVG was the last of Taiwan’s allies to establish an embassy in Taiwan, doing so on Aug. 8 — 38 years after establishing diplomatic relations.

Bowman added that SVG’s presence in Taiwan continues to bring her pride.

“What’s happening here, I think, is positive and ought to be maintained and respected. There are 29 flagpoles outside in the yard, however, there are only 14 flags and our flag is right at the top,” she said in an interview at the complex in Taipei, where embassies are located.

“Every morning when I look out of my window and I look at it, I say this stands for something; this counts for something. So I would love to say and I feel and I hope that we are here to stay and our students should have that sense of confidence,” Bowman said.

In addition to the ambassador, the staff at SVG’s embassy includes Minister Counsellor Elroy Wilson and Taiwanese Diana Chao, the secretary.