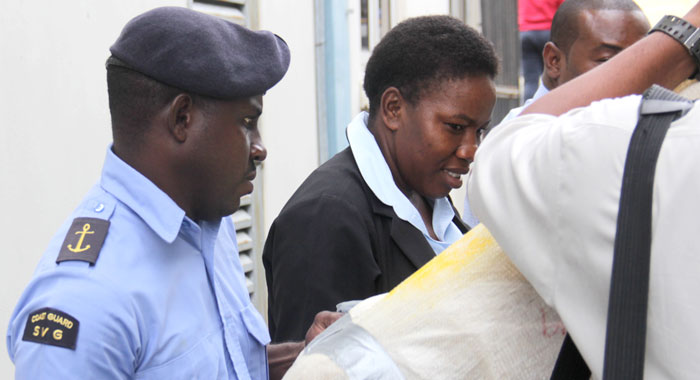 The Serious Offences Court had to be suspended for a few moments, on Tuesday, after a Coast Guard officer fainted and struck his head while testifying.

Able Seaman Fitzroy Davis, a witness for the Crown, was being cross examined by defence counsel Grant Connell in a drug matter when the incident occurred.

Chief Magistrate Rechanne Browne, who was presiding, noticed what was happening and shouted that Davis was fainting, saying, “Somebody hold him!”

But the police officers, who were court orderlies, did not respond in time and Davis fell to the floor, hitting his head.

The chief magistrate reprimanded the court orderlies, telling them that they need to be more vigilant regarding what is taking place in the courtroom.

iWitness News understands that it is not the first time that the officer has fainted while on duty. Sources say Davis also fainted on Aug. 1, when he was a member of a guard of honour at the installation of Susan Dougan as governor general.

When the matter resumed, Connell asked Davis if he was feeling better and the officer said yes.

“Do you want an adjournment?” the lawyer further asked and Davis replied, “No.”

The chief magistrate told Davis that if he feels lightheaded during the proceedings, he should say so.

“Because you don’t look so wholesome over there,” she told Davis.

As the cross examination continued, there were tense moments between the prosecution and the defence when Connell referred to Davis as “fragile”.

Connell had challenged Davis about a word he (Davis) had used earlier during the cross examination.

The lawyer, who had raised his voice, apologised for doing so “because you are fragile”.

But Delplesche told the court that Connell seemed to be “preying” on the fainting incident.

‘The witness is not fragile. You cannot do that, counsel,” the prosecutor said.

But Connell said he was trying to be “human”.

“Of course he is fragile. The witness fainted in the dock… Here you have an officer who just fainted. Counsel is now addressing him and trying not to ruffle feathers and making sure he is OK,” Connell said.

But Delplesche maintained that counsel couldn’t refer to a witness as “fragile”.

“Do what you have to do but don’t address the witness as fragile,” Delplesche maintained.

Connell responded, saying that if he had caused Delplesche any “discomfort, I retract the fragile talk”.

But Delplesche rose again, saying there is nothing that is causing him discomfort, adding that he is just playing his role.

“It’s my witness. I have to look after him,” the prosecutor said.

And, as the cross examination continued, Connell asked the Coast Guard officer about where he had gotten a particular piece of information he had given in his testimony.

“You didn’t hear me,” Connell asked.

“Well, you are not as fragile as I thought,” the lawyer said.

The development came during the trial of Marvin “Squat” Alexander, 43, of Diamond, Mark Bristol, a 48-year-old mason, of McCarthy, and Curton Allen, 40, a diver, of Union Island.

The men are jointly charged that on Feb. 22, at Fancy Point, the three had in their possession a controlled drug, to wit 292,376 grammes (644lbs) of cannabis with intent to supply to another.

The men are also charged with attempting to escape with the drug, and having it in their possession for the purpose of drug trafficking.

They are also charged that between Feb. 21 and 22, at Fancy Point, they conspired to traffick the cannabis.

The drug is said to have a street value of EC$1.73 million.

12 replies on “Coast Guard officer faints while testifying in court”