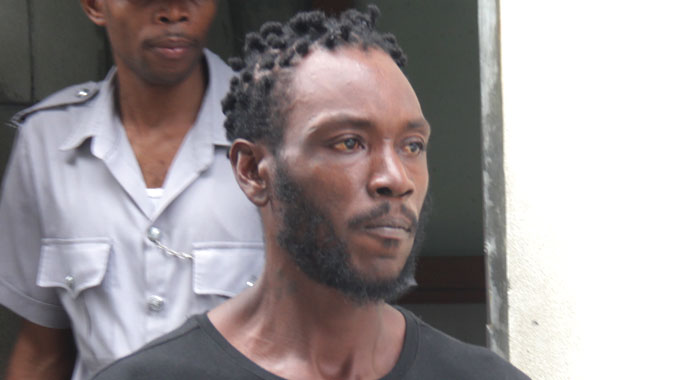 Accused rapist Alex Thomas is escorted to prison on Friday after failing to secure a surety by the time court was adjourned for the day. (iWN photo)

One man has been charged in connection with what was initially reported to police as the gang rape of a woman in Kingstown.

On Friday, Alex Thomas appeared, in camera, at the Serious Offences Court in Kingstown, where Chief Magistrate Rechanne Browne read the rape charge to him.

Thomas was not allowed to plead to the indictable charge.

He is charged that on Oct. 5, in Kingstown, he had unlawful sexual intercourse with a 58-year-old woman who did not consent to it and at the time was reckless as to whether she consented.

Thomas was granted EC$8,000 bail with one surety and was ordered to have no contact with the virtual complainant.

He was also ordered to report to the Biabou Police Station on Mondays and Thursdays between 6 a.m. and 6 p.m.

The matter was adjourned and transferred to the Family Court for Monday, Oct. 14, when the date of a preliminary inquiry is to be set.

Police had initially taken five men into custody in connection with the rape and were on the hunt for a sixth, on the day of the alleged crime.

The rape reportedly occurred at the Reclamation Site in Kingstown during the pre-dawn hours of Oct. 5.

3 replies on “Man charged in connection with ‘gang rape’”