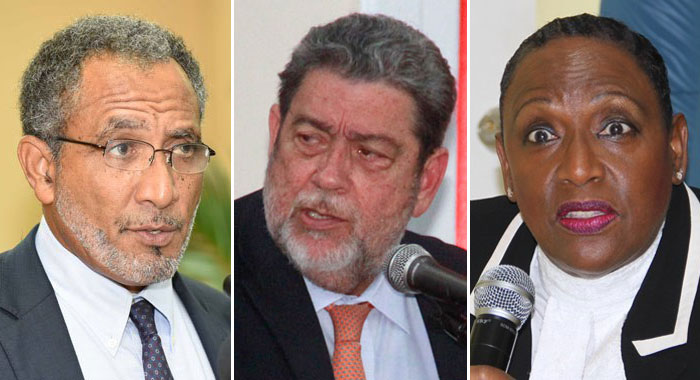 Two opposition lawmakers locked horns with Prime Minister Ralph Gonsalves, on Thursday, over the meaning of part of a law his government had passed replacing a decades-old amended legislation governing how state monies can be spent.

The legislation governs the timeframe within which the government must come to Parliament for approval of the use of special warrants.

A special warrant is an instrument used by the government to meet unforeseen expenses that had not been budgeted for.

The original law, dating back to the 1960s, had said that the government must bring a special warrant to Parliament for approval within 14 days.

However, the former New Democratic Party administration changed the law to give the government six months in which to do so.

When Gonsalves’ Unity Labour Party came to office, it repealed the law altogether and replaced it with the Finance Administration Act.

And Friday, a lawyer, questioned the meaning of that section of the legislation.

“What does this mean? Do you have an indefinite timeframe in which to bring the supplementary estimates to the house? If that is the case, that can’t be what is contemplated in the Constitution.”

The government had not brought supplementary estimates to Parliament for approval of special warrants since 2014.

And, during Thursday’s debate ahead of approval of those special warrants, it was revealed that in two of the years since 2014, the government broke the law by spending in excess of EC$25 million via special warrants during one year.

Friday said the new act is not in line with the original legislation or the amendment passed by the NDP administration.

He said the law passed by the Gonsalves government seems to suggest that it is up to the minister of finance to decide when to bring special warrants to Parliament.

“If it is an error and says it has to come within six months, then that will bring it in line with the previous act. If it is not and this is what is intended, the question is, for what purpose? Why is it changed? Is the minister saying that it is within his discretion or his good nature to say he should bring it before five years from now on but that he is not legally required?

In his contribution to the debate, Gonsalves, who is also a lawyer, noted that the law says “when in a financial year”.

He added: “So when the not less than six months after the date a special warrant was issued, caused to be laid before the House, I take it that you should lay it within the whole context of the structure of the statute, within the 12 month period. And if we want to make it clear, we should say that. But the point of it is that any reasonably interpretation of this section, it must be within a year.”

He said that if the special warrant has to be brought to account by bringing it to Parliament within six months, the warrant may be issued but the processes for its expenditure might not be completed.

“So it is reasonable that if it is done within that year you bring it within before the end of that year and something which is wise to do is that when you bring your estimates for the year, that you should have on the order paper the supplementary estimates also.”

“Well, we are following the law and I outlining how, internally, the processes of a special warrant take place and all the checks which happen…” he told law makers.

And, in her contribution to the debate, opposition senator, Kay Bacchus-Baptiste said what is required is that the law be followed.

“But how can you follow the law? The prime minister bragged that he amended the Finance Administration Act because it was so bad when he took over, so he amended it. But how was section 4 amended?” she said.

“So, here, from 1966, you had to do it as soon as possible and within 14 days. You changed the law, you say you are so interested in finance administration that you changed the law and you put a vague provision like section 28(40…”

Gonsalves, however, asked the senator to give way and said that the opposition leader had conceded that there was an amendment to the law under the NDP.

“And the point that I also want to make, is this: We did not amend the law; we repealed it in its entirety and brought in a new law which is far better. But that is not the point I am really — I am talking about she saying that it was 14 days and that we amended it to this vague thing. It was amended to 12 months.”

“How does that change what I am saying? I said the original law. It was said clearly that it was amended to 12 months. But you changed it, repealed that amendment and brought in a law that read like this: ‘The minister shall not less than six months after the date of a special warrant was issued cause to be laid before the House of Assembly supplementary estimates showing the sum spent.”

The senator asked the prime minister if he was saying that there was a mistake in the law that his government passed.

“Is it that it should have read not more than six months? It does not appear that that is what it is supposed to be because the prime minister never averted to that fact when he was speaking — oh it was a mistake. So the clear intention was to give any time after six months within which to bring this law.”

Bacchus-Baptiste, however, said that on an interpretation of the Constitution, it contemplates that the special warrant would be brought within a year.

“… and even on reading this particular act, you can say that it may refer to because the section begins with ‘when in a financial year’, but the actual subsection that deals with the law says, ‘not less than six months’, which means that you can’t bring it before six months, but there is no limit as was in the previous one by the NDP, which said 12 months…”

The senator said that Parliament will soon be debating an amendment to the Finance Administration Act and suggested that the section be reviewed to remove any doubts.

“It cannot be acceptable to spend government money and wait five years after you have been prodded by the opposition to bring these bills before the house and then bring them all together,” she said.

Parliament went on to approve the EC$123 million in special warrant spending between 2014 and 2018.