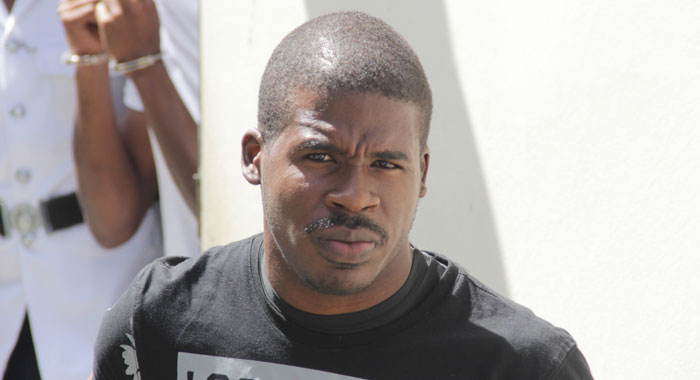 A man who appeared confident that he would have won his appeal has had his hope squashed by an additional six-month jail term.

Julius Carter, 25, of Fitz Hughes, had used Facebook to announce, on Tuesday, that he would win his appeal and sue a woman who the court had ordered him to compensate.

On Monday the court dismissed the appeal of a man who has chopped his sister then argued that he should not serve his jail term because he became paralysed in prison.

He was referring to his appeal of an April 20, 2018 ruling in which Senior Magistrate Rickie Burnett, sitting at the Kingstown Magistrate’s Court, ordered that he pay Afiesha Robinson EC$750 in one month or spend six months in jail.

The court handed down the sentence after finding Carter guilty of a charge that on Aug. 19, 2017, in Kingstown, he, by deception, received EC$750 in cash from Afiesha Robinson, the property of Shakira Defreitas of South Rivers.

Carter appealed his conviction and sentence, and the appeal was heard in Kingstown, on Tuesday, before Justices of Appeal Davidson Baptiste, Gertel Thom and Paul Webster.

The appellant argued that he was wrongfully charged and that the decision of the court was unreasonable and his punishment “too excessive”.

Carter outlined to the court that he was originally charged with theft but that charge was withdrawn and an upgraded charge of deception was laid against him.

He further pointed out that prosecution had amended the charge but there is no record of the change, making it a “prejudicial error”.

Carter also said that during the trial, the prosecution had constantly used “theft” as opposed to “deception”.

“In my view, from the prosecution view, I was found guilty of theft — not deception,” he told the appeal panel.

The man explained to the court that at that time of his conviction, he was a virgin to the law and didn’t represent himself well.

“You seem a very intelligent young person, you are presenting yourself well,” Justice Thom told Carter, who also represented himself at the appeal.

In response to Carter’s submission, the Crown argued that two credible witnesses were called at the trial and that the Crown was standing by its submission and that the EC$750 in compensation ordered by the court was reasonable in the circumstances.

Carter then asked the court, “Is it possible that I can have a retrial?”

The justices said they saw no reason for a retrial.

Carter further told the court that he had spent six months on remand awaiting trial and asked the justices to impose a sentence to reflect this.

However, this too was rejected, as the panel noted that the magistrate had imposed a sentence that took into account the time spent on remand.

On the appeal against the conviction, the court said it was satisfied that, based on the evidence, there is no record of a withdrawal of a charge but evidence that the charge had been amended.

The court further held that the magistrate was fair in his ruling and, therefore, dismissed the appeal.

As Carter predicament turned from bad to worse, he admitted to the court that he was yet to pay the compensation.

He said that he was released from prison on Aug. 31, after completing a sentence for an unrelated matter.

Carter said he had not worked since and was unable to pay the money.

Asked by Justice of Appeal Thom if he has a skill, Carter said he could paint.

After deliberating, the court said it was confident that Carter had the means to pay the fine.

The court dismissed his appeal and ordered him to serve the six months prison term in default of compensation.

The sentence began on Tuesday.

After he was taken to the prisoners’ bench, Carter sat, at times, with his head bowed as if in deep thought, and, at other, with his hands covering his face.

In March, the Serious Offences Court sentenced Carter to nine months in jail for stealing and destroying a laptop the Community College had lent to his cousin.

In recent times, Carter has been a prolific commenter on the iWitness News Facebook page, to the extent that Facebook accorded him “Top Fan” a status.

Facebook accords that status to persons who are the most active and engaged on a page or group.

In another comment on the story on Tuesday, Carter wrote:

“One must think b4 acting… if alcohol makes you do the unthinkable it is time you leave it alone … then again provoking someone can lead to something serious…. regardless of the relationship with the person….”

iWitness News understands that after his conviction in 2017, Carter used social media send untoward messages to an officer of the court, who responded by blocking him on the social media website.