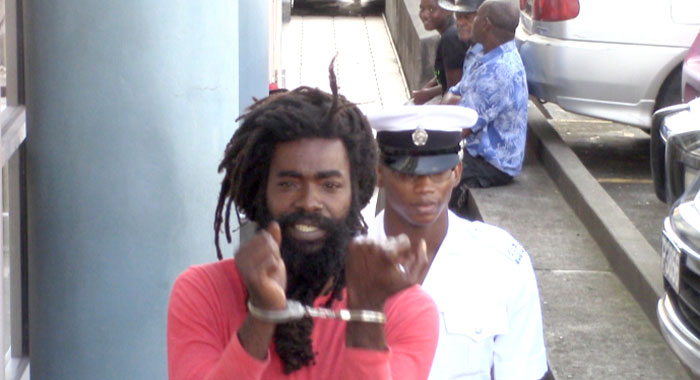 A Union Island man who, in January 2018, was jailed for five years for possession of 257 lbs of weed will serve one year less, as the Court of Appeal has reduced his sentence.

“I am appealing against the sentence. I feel it too high and I am a first-timer,” Israel Thomas, 33, successfully argued before the Court of Appeal, sitting in Kingstown, on Tuesday.

Thomas presented his case to Justices of Appeal Gertel Thom, Paul Webster, and Davidson Baptiste — who headed the panel.

Thomas was nabbed on Jan. 11, 2018 in Union Island during a police stop and search operation.

He was jointly charged with Keith Williams, who pleaded not guilty.

The drug was found in the pan of motor vehicle TR30, after officers uncovered a tarpaulin revealing some sacks, seven of which contained the marijuana.

At the sentencing, Thomas’ lawyer, Roderick Jones, had told Chief Magistrate Rechanne Browne that he was throwing his client upon her mercy.

The lawyer said Thomas had been a victim of circumstance in that, at the age of 6, his father, who was the breadwinner, was “unceremoniously removed from this life”.

The lawyer said that, as a result, Thomas had a hard life, did not complete secondary school and had no skill.

Thomas had committed himself to supporting his mother, the lawyer said,

Jones told the court that in the drug trade once you get in, it is difficult to get out without some intervention.

In presenting his case to the Appeal Court, Thomas said he had no previous convictions and had pleaded guilty at the first opportunity.

He, however, said that after being sentenced, he realised that other people who had committed similar crimes were being sentenced to four years in prison.

Thomas said he realised that he did not get the one-third discount accorded to persons who enter a guilty plea at the first opportunity.

In representation on behalf of the Crown, Counsel Rose-Ann Richardson explained that in sentencing, the magistrate had taken into account Thomas’ sickly mother and the fact that he was a first-time offender, and that the one-third discount was applied.

After analysing the mitigating and aggravating factors, Richardson said, the magistrate was of the view that a sentence of two years and three months would not have reflected the seriousness of the case.

She said the magistrate had referred to Fabien Rock who had had about 62.7lbs of marijuana in his possession and Cassion Bascombe, who had about 40lbs, significantly less than Thomas’ 257lbs.

As a result, the chief magistrate felt that the prison term should not be lower and imposed a five-year sentence, but didn’t give other reasons as to how she had arrived at five years.

The Crown Counsel noted that concealing the drug was the aggravating factor.

However, Justice Thom pointed out that the Appeal Court finds the five-year sentence was excessive.

The jurist noted that Thomas had pleaded guilty at the first opportunity, had no previous convictions and that the maximum penalty is seven years.

Justice Thom also said the court was of the view that the chief magistrate did not give reasons as to how she arrived at the five years.

In light of this, the court ordered the appeal allowed to the extent that the five years imposed by the magistrate be set aside and a four-year imprisonment be substituted.