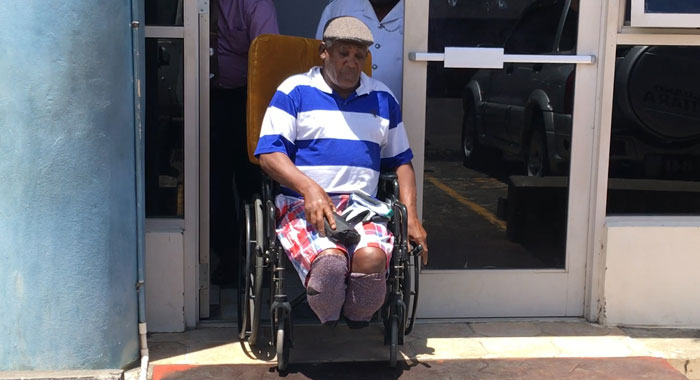 Andrew Myers of Buccament Bay leaves the Kingstown Magistrate’s Court in his wheelchair for prison in May 2018. (iWN photo)

A 55-year-old double amputee who asked a former prisoner about life in prison only days before inflicting a 10-centimetre deep, three-centimetre wide stab wound to his wife’s upper chest, has been freed after serving just over a quarter of his sentence.

The man had served just one year, four months and two weeks of his sentence when the Appeal Court decided to release him.

In May 2018, Senior Magistrate Rickie Burnett, sitting at the Kingstown Magistrate’s Court, sentenced Myers, a Buccament Bay resident, to four years in prison.

The man, who uses a wheelchair as both of his legs have been amputated below the knee, had pleaded guilty to a charge that on May 26, 2018 at Buccament Bay, he unlawfully and maliciously wounded his wife.

Monique Myers — Andrew’s wife for 27 years at the time — detailed to the court the multiple attempts that her husband has made to injure her and his threats to end her life.

The facts of the case are that on the day of the stabbing, Mr. Myers telephoned the Layou Police Station around 9:40 a.m., saying that his wife and their son were beating him.

The police responded, but found that this was not the case, but that there was an issue with the couple’s son refusing to hand over his father’s vehicle key, as Mr. Myers had requested.

The police spoke to the parties and an argument ensued between the couple.

As the police were about to leave the property, they heard Mrs. Myers calling out to them and saw her coming in their direction. They observed that the woman had an injury to her chest.

She told the police officers that her husband had stabbed her with a knife as she was passing close to his wheelchair.

The police met the defendant with the knife in his hand and had to wrestle with him to get it away from him.

Mr. Myers told the court that since one of his legs was amputated two years earlier, his wife started giving him problems telling him that she would “take man on my head” (cheat on him) and that she is only his wife “on paper”.

Mr. Myers lost his other leg in the year 2017 and he told the court that since 2018 began, his wife has been giving him problems.

At this point, the magistrate told the man that if his wife is “hurting your head”, there are certain things he can do, but injuring or killing her is not among them.

For her part, Mrs. Myers told the court that her relationship with her husband has always been abusive.

At the appeal hearing this month, Tammika Da Silva-Mc Kenzie, who appeared on behalf of the Crown, said that the Crown was of the view that the sentence could be varied.

She suggested that the remainder of the sentence be suspended for between two and three years.

Mr. Myers had represented himself at the magistrate’s court but retained the services of Israel Bruce for the appeal.

Lawyer Kensha Theobalds held papers for Bruce, who was not at the appeal hearing.

Theobalds argued that Mr. Myers’ sentence should be commuted to time served, saying that her client had already served what could be considered a sufficient sentence.

Chief Justice Dame Janice Pereira chaired the panel whose other members were Justices of Appeal Mario Michel and Louise Blenman.

They considered the fact that Myers was 54 at the time of the incident and that it was his first conviction and concluded that the magistrate’s sentence was unduly harsh given all the circumstances.

The panel said that Mr. Myers has filed reports with the police about alleged abuse by his wife and son.