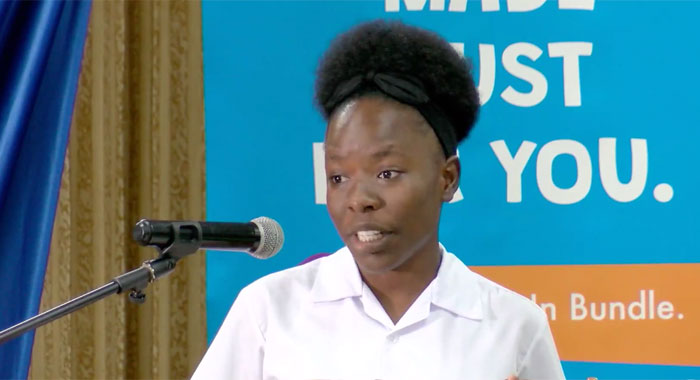 A finalist in the National Secondary Schools’ Public Speaking used her Student-Prepared Speech to highlight the minibus culture in St. Vincent and the Grenadines and the untoward impact on young passengers.

The speech, which won in that category of the competition, helped Shaiyan Bowman, a student of Mountain View Adventist Academy, to place second overall.

She began her speech, entitled, “Minivans’ Hustle”, by imitating minibus conductors calling out the names of their destinations while “campaigning for passengers”.

Bowman said she believes many of these conductors would easily earn a university degree in van packing.

“These young men made the expression ‘pack like sardine’ look like joke. They would not move an 18-seater van unless there are 25 persons on board,” she said.

Passengers have to “lap up and small up yourself,” she said, adding, “Talk about close contact.

“But guess what? The school children love that. It’s all a part of the minivan hustle.”

She said there is something special about the driver, too.

“I believe that many of them would easily earn a licence for flying, rather than driving. I am convinced that if there were not so many corners on our road, many of our drivers will literally cause those vans to fly.”

Bowman argued that some minibus drivers would put to shame Newton’s law that light travels in a straight line.

“I am now convinced that light bends. How else can you explain vans overtaking other vehicles around corners at top speed, if light cannot bend to allow these drivers to see around the corner?” she said, adding, talk about the minivan hustle.”

She said music is another important thing in the hustle.

“If you want school children in your van, you must have music and it must be loud, especially music punctuated with sexual lyrics, sprinkled with bits of expletives.

“Why do you think school children don’t like the school buses? Many prefer to reach to school late everyday rather than to drive these very spacious, carefully driven school buses where the only music is coming from 107.5 FM,” she said, referring to the state-owned radio station.

“There must be music with children sitting in each other’s lap. That’s all a part of the minivan hustle.”

Bowman said another thing in the hustle is the competition for the title of “hardest van on the road”.

“There must be shining rims, a great sound system, loud music, psychedelic colours, graphics, slogans and names — ‘Toppa’, ‘Beats’, ‘Dazzle’, ‘Keeves’, ‘Venom’. The hardest van must have them all. It’s all a part of the minivan hustle.”

She said she saw a minivan with a very interesting name: “Step up”.

“Minivans play a very important role in our society, providing an invaluable service. We understand the hustle. After all, the young men have to make a dollar. But, it is time for them to step up.

“Speed is necessary, yes, but safety is more important. Too many lives are at stake. It is improper to have schoolgirls sitting in the lap of young men, or anyone for that matter. Can we step up by keeping the profanity and vulgarity out of the music and turning the volume down?  Too many of our school children are affected negatively by it.”

“Chairperson, as we renew at 40, the minivan hustle must step up,” Bowman said, echoing the “Renewal @ 40” rubric under which the government has announced a number of improvement initiatives to celebrate the 40th year of the nation’s independence.

Rishona James of the Girls High School was the overall winner of the competition.

She used her main speech to highlight religious hypocrisy on issues of sexual morality when she debated the topic “Should individuals who claim to be LGBTQ be afforded all human rights prescribed under international law?”

She captured the Main Speech category and the Impromptu category, speaking on the topic, “Exams”.

The other finalists were: