Electricity prices to fall by one-third in 2022 — PM 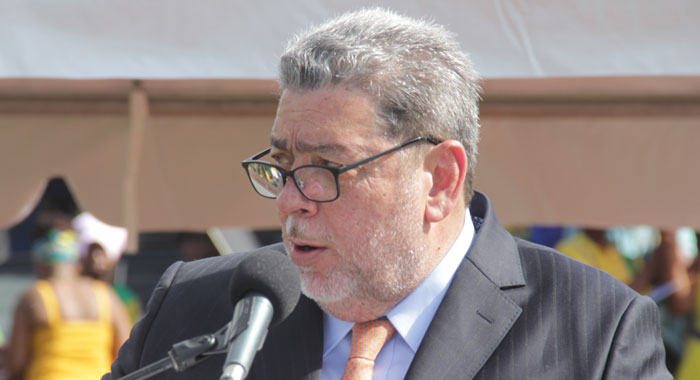 Electricity consumers in St. Vincent and the Grenadines will see their bill decreasing by at least one-third from February 22, Prime Minister Ralph Gonsalves said on Monday.

He told the Madungo Festival at the Chatoyer Recreational Park at Rabacca that he had received earlier, on Monday, “very, very good” news about the nation’s geothermal energy project.

It was the second time since July that the prime minister was making such an announcement about the project at Bamboo Range, on the eastern slope of La Soufriere, an active volcano that last erupted in 1979.

In July, the PM announced that there had been “good results” after the drilling of the first well.

However, one month later, a technical expert associated with the project told the media that while the first well was successful in terms of the temperature, they had not found the required permeability.

On Monday, Gonsalves said that by February 2022, 80% of the electricity will produce in SVG will come from hydro, geothermal, and solar.

“And, as a result of that, your electricity bill will go down by at least one-third. Just bear with me because we will not have to increase the amount of fuel, which is expensive,” he said in the speech in which he said elections will be called by the end of next year.

General elections are constitutionally due by March 2021, but governments in SVG have traditionally not used the three-month grace period that would take the life of Gonsalves’ administration up to that time.

“You see, they coming to tell you they go take off five cents here and three cents there. If they do that, you going put VINLEC under pressure and you going have blackouts,” he said, apparently referring to his political opponents.

He said that what is really necessary is a switch to renewable energy.

“That is the modern scientific world and is clean energy and cheap energy and I want to tell you today the news from up at the geothermal site is very, very good today,” he said.

The prime minister read from his phone what he said was a text message, which he said was sent to him at 3:22 p.m. that day from Ellsworth Dacon, director of energy.

The message, the prime minister said, read: “Good news. The second well was drilled for 83 days at a depth of 2,800 metres. After stimulation of this well, there are positive indications of both permeability and temperature.”

The PM said the temperature has to be “of a particular extent”.

He explained that the permeability means that the rock must have holes in it so that the steam can come out.

“And when they pump the water in to test the permeability, the water is disappearing down through the rocks at the rate of 70 litres of water per second,” he further explained.

Gonsalves continued to read the message, saying: “Currently the measured temperature at the bottom of the well is 215 degrees Celsius. The well continues to heat and the stimulation process will continue in this well for a few weeks.”

He said that given “the positive outcome” of the well, the drilling teams and consultants have decided to proceed with the drilling programme.

Therefore, drilling of a third well will commence in the next few days, the PM said, adding that the testing equipment will arrive within another two to three months.

This equipment will be used to determine the potential power output.

“A decision by the technical team to remedy the first well or to use it as a possible reinjection well will be determined following the well testing,” the PM said.

He said that after testing, the geothermal power plant has to be constructed and then VINLEC, the state-owned power company, has to run the transmission and distribution cables.

“This is a project of 100 million and I have organised all the funding already,” Gonsalves said.

“The money which we have to put in, we either getting it as soft loans or as grants and the soft loans have very long periods of repayment and very small sum of money coming from our treasury. That is how, while others talking backward foolishness, we are doing the work for independent St. Vincent and the Grenadines and the people thereof,” he said in the speech, one day after the nation’s 40th anniversary of independence from Britain.