Niger’s giraffes, a conservation lesson for the Caribbean 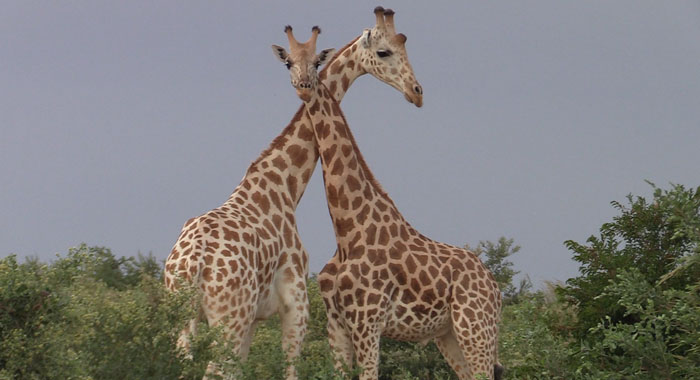 KOURE, Niger (CMC) — The four large buses had turned off the highway into the biosphere reserve after travelling 50 milometers from the capital, Niamey.

The passengers had earlier been forced to walk for a more than a kilometre after the buses became bogged down by the savannah sand.

Led by the country’s Minister of Cultural Renaissance, Arts and Social Modernisation, Assoumana Mallam Issa, the passengers, who were delegates attending the fifth meeting of ministers of culture from the African Caribbean and Pacific (ACP) group, were not discouraged as they made their way through the sand and brush, united in their thoughts that the visit to the Koure National Park for a first-hand look at the regal-looking West African giraffe was worth it.

After all, Niger is the only country in the world where the animals still live. According to the website, African Wildlife Foundation, recent genetic tests on giraffe in European zoos, once thought to be West African giraffes, concluded that they were actually a different subspecies called the Kordofan giraffe.

The West African giraffe used to be common in a number of countries in that part of the continent, including Nigeria, Mali, Mauritania and Senegal.

However, they only now exist in Niger.

Issa told the Caribbean Media Corporation (CMC) that the presence of the animals is a lesson in conservation from which the Caribbean can learn.

“I think there is no more than two, three countries in Africa that has this type of giraffe. For us, it is the last for all the area of Western Africa,” Issa said.

African Wildlife Foundation says the West African giraffe is a subspecies of giraffe, distinguished from other types by its light, tan-coloured spots, compared to the darker markings of other giraffes.

The West African giraffe stands almost 19 feet tall and can weigh up to about 2,800 pounds. Males have thicker horns than females, and are taller.

According to the website, before World War I, West African Giraffes lived throughout the Sahel and Savanna regions of West Africa. However, due to extreme population decrease, they now inhabit only a small part of Niger.

Issa told CMC that the continued presence of the West African giraffe in Niger is the result of a very focused conservation policy that the government implement after the population had plummeted to just 50 individuals in 1980.

“It is not something we leave to the population. The government set a policy,” he said, noting that there are park rangers whose job is to protect the giraffes.

“And we have some very, very strong laws against people killing them.  If you kill a giraffe in Niger, that is like you kill a man.”

The legal protection and the supporting personnel, couple with natural reproduction have led to resurgence in the giraffe population in Niger.

As a result of that policy, there are around 633 West African giraffes in Niger, and they have been reintroduced to part of the country where they could have not been found.

In 2018, eight giraffe were transferred to Maradi Region, home to Niger’s second largest city, some 600 kilometres away from Koure.

“So now we have a second area where we can find some giraffes. This shows the importance of those giraffes for West African countries, also for African, and I can say, even if we want to be more optimistic, we can say for the whole world. That’s why we are promoting this kind of tourism.”

Issa spoke to CMC at the end of the conference, the theme of which was “Strengthening and Diversifying Partnerships for ACP Cultures”.

The meeting came as ACP countries negotiate a post-2020 relationship with the European Union at a time when culture is being presented as an untapped sector that can contribute to the further development of the region.

Issa noted that the conference focused on culture and environment.

“That’s why we say the other thing we have to discover is a symbol of our heritage and our natural heritage,” he told CMC.

“In some of our African countries, we have some problems. Sometimes, something very important for us, we don’t discover it. So we say that for us, as ministers we have to do a lot of sensitisation.”

He noted that some of the young Nigeriens on the tour, like the visiting conference delegates, were seeing a West African giraffe for the first time.

“We are not far from Niamey. It is just 50 kilometres to Niamey but there is a lot of young people who have never seen this kind of giraffe… So we are doing our best to sensitise them to say that tourism is not only for those who come from outside, tourism is also for the citizens,” the minister told CMC.