Mounting my soap box in response to Jomo 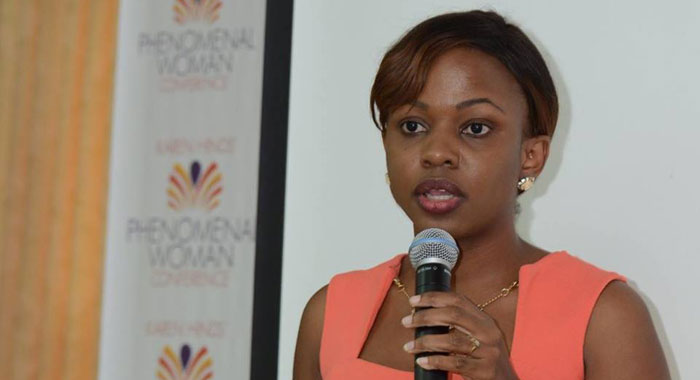 (Editor’s note: Shafia London, the writer of this opinion piece, first published on Facebook, is wife of Grenville Williams, who, in 2015, bowed out of the race to become the Unity Labour Party’s candidate for South Leeward when he endorsed Thomas as the candidate.

Lovely day to get up on a soap box! … let’s talk about that opinion article by the Speaker dated Nov. 1, 2019.

Mr Speaker, it is sadly entertaining to see how politics and arrogant lust for power could make the ugly in people show itself proudly. I guess the liberation that comes along with a keyboard, freedom of speech and untamed ambitions give some people the right to throw public tantrums due to a screwed up sense of reality and facts.

Resign if you must, write if you must but don’t go dragging others in the most egomaniacal and contemptuous way into your public tirade, thinking there would be no rebuttal. My husband maintains a dignified silence for which he continues to earn respect day after day. Me on the other hand, my unfettered tongue is a consequence of both nature and nurture especially when hypocrisy stares one in the face. I am troubled by the notion that emotion or pendulous political belief would trump objective reality.

Let me say here and now, that I currently have no real or disguised political affiliations with any of the political parties in St. Vincent and the Grenadines. I do not hold your political resignation against you. I don’t even care for it but based on the social media feedback you earned the respect of some, some deemed you quitting instead of finding solutions as a propensity, while others rejoiced and said good riddance. It is your most recent writing dated Nov. 1,found on iWitness News as to why you resigned that has provoked the depths of my genomic structure and compels me to respond. Your most recent writing exemplifies the ignorance that contributes to corrupting the minds of the noble people of St. Vincent and the Grenadines. Your account of your short-lived career in electoral politics is painted with blatant inaccuracies, distortions and insensitivities of grandeur proportions such as:

1. In an iWitness News opinion piece dated Nov. 1, 2019, you said you were invited to join the ULP in 2013. While in a Searchlight newspaper opinion piece dated Nov. 3, 2006, mention is made of a ULP membership #5280 since 2005. This first singular but critical obscuring and obfuscation of the facts bores holes in your writing and even leads to a reasonable conclusion that “truth” might perhaps be an absent concept for all other parts of the account provided. As a known advocate of rights, you will agree that facts and truth are the constant pursuits of an enlightened citizenry, unshakable pillars recognized as cornerstones of democracy.

2. As a trained attorney, where Latin terminology abounds you may also be familiar with the phrase De mortuis nil nisi bene [dicendum] (“Of the dead, [say] nothing but good”) in other words it is inappropriate to speak ill of the dead and to ask them to speak their side from the grave. May their souls rest in peace. Your utterings on the two gentlemen who have passed display a character void of compassion and respect. I beg of you to resist the selfish impulse that drives venomous, one-sided and unproductive discourse against the dead.

3. You continue to rely on a questionable poll to stroke your ego. The odds of an outcome by flipping a coin are much higher than the reliability and accuracy of the historical predictions of that entity across the region. Is there one iota of credible evidence that such a survey was even conducted? If there was a poll, what percentage of persons were surveyed? How can someone who prides himself as being learned and erudite take the results of that poll to boost confidence evades many to this day.

4. You claim there was a “jaundiced, venomous and scurrilous barrage” against you. The ultimate “truth” remains a mystery. What we do know is you willingly joined a party, ran on their ticket blindsided by what appears to be egotistical and unbridled opportunistic ambitions. It is reported that you even claimed South Leeward was the easiest of constituencies to win. Perhaps your selection as a candidate was a checkmate political manoeuvre but ultimately you fell for it. Even Stevie Wonder could have seen that your chances of winning that seat were nil to none. Even from a biased lens, it was clear you treaded in unfamiliar territory, your political canvassing was cold and emotionless at best, lacked authenticity and when asked about your developmental plans for the constituency you shared none of substance. Your argument of not having support is flawed. Have you considered that perhaps you had a significant part to play in your defeat?

5. This impoverished victim script from which you now read is certainly more entertaining than that call you made to my home one Sunday morning when you pompously declared, “I am the superior candidate”. Ah! Don’t get it twisted, Mr. Speaker, it is very much entertaining when fowls come home to roost especially those seemingly infected with a superiority complex.

Mr. Speaker, when principles and philosophies become matters that can be negotiated depending on what powers can be attained then we are a ship tossed by a mere zephyr of selfish ambitions. At least the world no longer has to hypothesize about this callous demonstration of an exploit of circumstances to gain immediate advantage rather than being guided by consistent principles. Did blind ambition trump discernment and allow the plain truth to be put on public display? In your mental recall, I beg of you — check your reality math. Democracy requires plain and honest talk; let’s get back there, Mr. Speaker.

32 replies on “Mounting my soap box in response to Jomo”