‘From crumble to rumble’ in East Kingstown 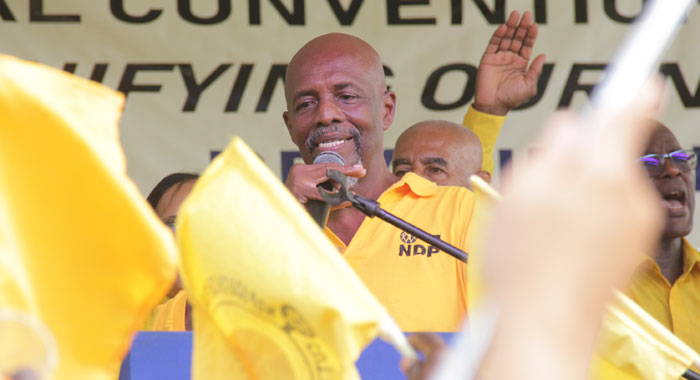 Member of Parliament for East Kingstown, Arnhim Eustace speaks at the NDP convention rally in Arnos Vale in September, when he announced that he will not contest the next general election. (iWN photo)

The main opposition New Democratic Party (NDP) says it has moved from a situation where some persons saw a “crumbling” in East Kingstown to a rumble in that district as the candidate selection process takes place.

“Sometimes, people also have to pause and give credit to the New Democratic Party in the way that it does business,” Leacock, one of the party’s two vice-presidents said on radio on Wednesday.

Leacock, who is MP for Central Kingstown, said that his East Kingstown counterpart, Arnhim Eustace, a former NDP president and Opposition Leader, took his own time and used his political judgment to announce that he will not be running again.

Eustace has represented East Kingstown since 1998.

“And that has facilitated new political interest in the constituency,” Leacock said.

“So in one sharp stroke, the discussion and the debate which surrounded a lot of people was that things were crumbling — that’s how some people perceived it; that was not our view — in East Kingstown has moved from a crumble to a rumble. There is a serious rumble in East Kingstown by the fact that you have three, four very good candidates who are offering themselves in primaries to be selected as the representatives,” Leacock said.

He said all of the four prospective candidates are “all worthy and deserving of our attention”.

Leacock said one of the candidates is a chartered accountant, another is a former banker and businessman, a barrister of law, and there’s an economist and diplomat.

Speaking of the pool of potential candidates, Leacock said:

“What more choice you want to have? And then they are all with political savvy and acumen. The people will speak and the party will exercise wisdom. So we have moved from a ‘crumble’ to a rumble and you will see that same rumble taking place in different constituencies.

“And the party will also decide in which constituencies experience is required, in which ones youth is to be put to work, and, ultimately, what culmination is required to help the New Democratic Party to hit the ground running from day one. Remember we said from the day we win the election, we will be better off.”

Leacock has been representing Central Kingstown since 2010.

Meanwhile, speaking on the same programme, NDP chairman and MP for West Kingstown, Daniel Cummings, said that when the dust of candidate selection is finished, the nominees will join hands, not only in a symbolic way.

4 replies on “‘From crumble to rumble’ in East Kingstown”