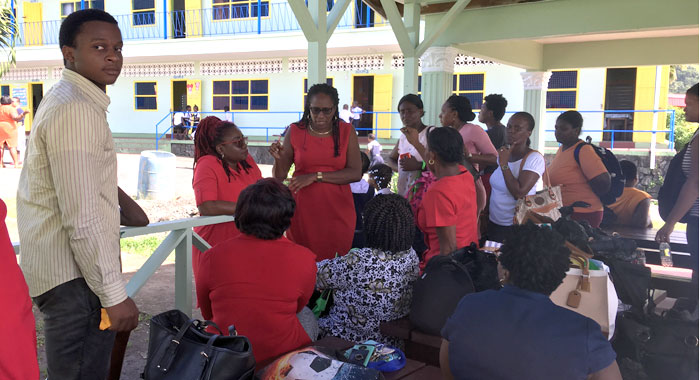 President of the SVG Teacher Union, Wendy Bynoe speaks with teachers at the Questelles Government School on Monday. (iWN photo)

Pupils at the Questelles Government School were sent home on Monday — for a third straight school day — because of a rat infestation.

The problem came to the fore last Wednesday when rats were seen in the staffroom and in classrooms at the school which is composed of multiple buildings, some of which are over five decades old.

iWitness News was shown areas where there are spaces between the ceiling and columns, through which the rodents were said to be jumping from the ceiling into the classrooms.

Last Wednesday, the principal of the school gave students a note to take home to their parents, instructing that the pupils not attend class until Monday.

One parent told iWitness News that the letter did not give details about the issue at the school, but a teacher told her that it was a rat infestation.

The parent was at the school compound on Monday, when iWitness News visited.

Also, there was Joycelyn Blake-Browne, senior education officer with responsibility for primary schools in the district that includes Questelles, and Wendy Bynoe, president of the Teachers’ Union.

Several teachers were sitting under a gazebo close to the entrance of the school while the principal was speaking with some students near a tree on the premises.

“…  we ain’t getting any news from them. We are just standing,” said one woman, who also told iWitness News that her child came home last Wednesday with the letter from the principal.

Another woman said that through conversations with teachers, she learnt that there was a rat problem at the school, and that the students had been sent home so that officials could address it.

The woman, however, said that she understands that the building was not cleaned but that rat bait had been placed on the compound.

She also complained about the condition of the toilets at the school — about two months after the government completed a major repair programme under which all schools were renovated.

“The toilet is very dirty for children,” the mother told iWitness News.

“And I am not sending my child in that toilet. They have to shut down this school and clean the whole school for the teachers and the children.”

Meanwhile, the teachers declined to comment to the media, choosing instead to defer to their union.

And, Bynoe, speaking to iWitness News after talks with the teachers and Blake-Browne said that her union was informed of a rat problem at the school.

“We have been told that the nest can be found in a nearby building,” she said, referring to a building formerly housing the Questelles Post Office, which is located on the school compound.

“Our teachers have decided to take a stand by staying out of the classroom this morning. The principal has informed us that they will have the place sanitised today,” Bynoe told iWitness News.

“However, our teachers have just informed us that they will not return until the nest has been taken care of,” the teachers’ union leader told iWitness News.

Bynoe said that the principal had told her that there was no new evidence of rat droppings at the school Monday morning.

The Vector Control Unit of the Ministry of Health had visited the school and set rat bait and education officials were waiting on the cleaners to sanitise the compound, Bynoe said.

Meanwhile, Blake-Browne confirmed to iWitness News that there was an issue with rats at the school last week.

The senior education officer, however, said that the Vector Unit had visited and dealt with the problem.

“They found no further signs of rats or droppings but because this all took place over the weekend; we didn’t have the time to sanitise the furniture. So, unfortunately, we had to send the children back home so we can sanitise because we won’t want to have them (students) eating and touching and then they ingest and they are sick.  So, we are taking the safety precaution and do the right thing and have the furniture in the classroom sanitised.”

Blake-Browne said that classes should resume on Tuesday.

“But before we do, however, we are going to call back the Vector Control, let them do a further inspection and give us the all clear,” she said.

Monday afternoon, the Ministry of Education issued a statement, saying it had decided to keep the Questelles Government School closed until Tuesday as a result of “a potential health hazard”.

The statement said that the school management informed the ministry last Wednesday of “a rodent problem”.

“Fully aware of the magnitude of this situation, an immediate decision was made to suspend classes at the school for the remainder of that week, in order to guard against the potential hazard and to allow the relevant authorities to intervene.”

The ministry said the Environmental Health Unit was immediately contacted and responded with school visits on Thursday and Friday to assess and address the problem.

On Monday, the Environmental Health Unit advised the Ministry of Education that classes could resume, having completed a full assessment of the facility, the statement said.

“However, as a further precaution, the ministry has made the decision to keep the school closed until Tuesday Nov. 12.

“Meanwhile, the Building Roads and General Services Authority (BRAGSA) and the Public Health Department are collaborating and working assiduously to fully remedy the situation,” the statement said.

The Ministry of Education thanks all parents, students and staff of the Questelles Government School for their understanding, patience and usual cooperation on this matter.