‘Totally unchristian’ not to care what people do in their bedrooms 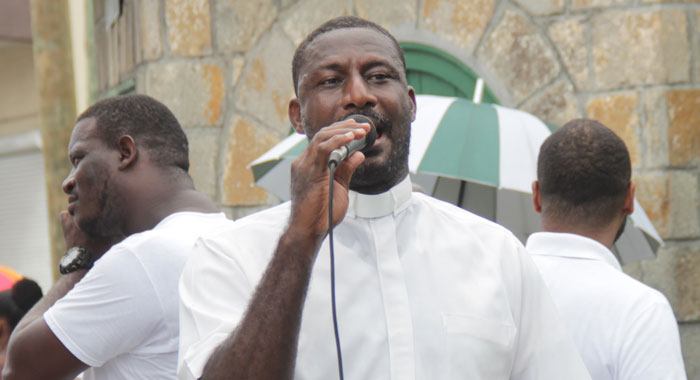 The Reverend Adolph Davis speaking during the march and rally in Kingstown on Thursday. (iWN photo)

A Methodist preacher says it is totally unchristian for the church not to care what people do in their bedrooms.

The Reverend Adolph Davis told the rally in Kingstown on Thursday in support of the nation’s buggery and gross indecency laws that Christians had gathered together “because we care”.

Christians rallied in response to a legal challenge to the laws, which two gay Vincentians are asking the court to declare unconstitutional.

The men say that the laws violate their constitutional right to dignity.

But Davis said that in marching in support of the laws, Christians were standing up for and calling the nation to righteousness.

“Now, tell me something: who seriously loves St. Vincent and the Grenadines going vex when yo’ stand up for righteousness,” Davis said.

Davis said he could take the attitude and say he does not care what people want to do.

“But the love of God in Christ makes me have to care. And hear this: It makes me want to care what people do in public,” Davis said, and stretched out the microphone to the crowd, which added, “and in private”.

He said it would be “totally be unchristian if I say I don’t care what people do in their bedroom.

“The love of God means I care what you do, known or unknown, private or public. I care because I love you.”

Davis said that things have broken down in families and that is a serious problem in the nation.

He quoted Genesis 2:18, where God said it is not good for a man to be alone and he would make a suitable partner for him.

The reverend said it was God’s idea to bring woman to man and to marry them.

“Who made the first family? Who knows how family supposed to function? And who put family in place to bless a nation?” he further said, as the crowd continued to respond God.

Davis said that is why they were rallying “because we know that God has a purpose and a plan for the family.

“But my goodness gracious, things have gone bad. Family is supposed to be the foundation of any society and of humanity but our foundation has been shaken,” he said.

In his speech, Davis outlined other threats to the family, including adultery, child neglect, domestic abuse, and the sexual abuse of children.