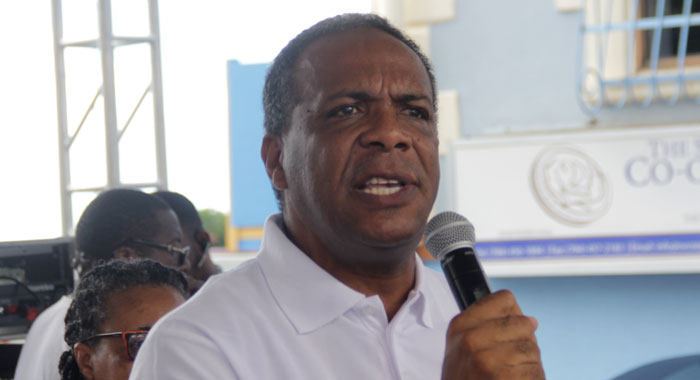 Bishop Stephen Ollivierre of the Pentecostal Church addressing the rally in Kingstown on Thursday. (iWN photo)

A Pentecostal cleric says the church can take some of the credit for the lower murder numbers in St. Vincent and the Grenadines in 2018 and so far this year.

Bishop Stephen Ollivierre said many persons have gone on radio and asked what the church is doing about crime in the country.

On Thursday in Kingstown, he told the rally in support of retaining the nation’s buggery and gross indecency laws that on Oct. 4, 2017, Bishop Davis and the New Testament Church organised a march calling attention to the issue of crime.

“… and they walked the streets making a stand against crime. Churches were fasting and praying for this country, on our radio programmes, on our TV programmes, churches were pleading with perpetrators to stop what they were doing.

“But listen, we have learnt a lesson. We were in our own corner talking saying this and saying the other, but we discovered where unity is there is strength. That’s why we came together today as a people. We put aside our differences and we are saying we need to stand up for righteousness in this land,” Ollivierre said.

He said God has answered their prayers and the church will continue praying.

Ollivierre said that when crime is high, people would not want to visit SVG and also Vincentian intellectuals would want to leave.

“Oh, crime is a terrible thing. Crime is not good. When we look at it, we applaud the efforts of our land because we have Pan Against Crime. Thank God for the initiative. We have the DARE programme — the Drug Abuse Resistance Education, … we have so many things that people are doing in the community but I am standing here to let you know that there is another dimension to crime,” Ollivierre said.

The Bible says the heart of men is wicked, Ollivierre said, adding, “There is a spiritual dimension to all of this.”

He quoted Ecclesiastes 8:11 — “Because the sentence against an evil deed is not executed quickly, therefore the hearts of the sons of men among them are given fully to do evil.”

“There are some people, because they are not caught, oh, they feel they are getting away. They feel they are so smart. They think for a moment it’s okay, but I want to declare to you wherever you are, if you are part of it, if you feel that the wrong you are doing, you will get away, but we serve a God, he watches, he sees and he knows what is happening and at some point in time, you’re gonna pay for your wrong.”

Ollivierre said God has given the nation the government, which has the power to use the sword.

“When things are wrong, they must put the laws in place to deal with what is happening in our land.”

Like he said to Habakkuk, God is saying to St. Vincent and the Grenadines that he has a plan.

He said the church must realise that the time to evangelise is here and that it has been sitting down for too long.

“The days for sitting down and keeping quiet, it has gone… It is time the church get to a point that it becomes militant and it is time the church understands God has given what it takes to change the hearts and the lives of men and women who are wretched and messed up. God can turn them around. God can change them,” Ollivierre said.

Thursday’s march and rally was organised by the Christian Coalition, a group of 10 churches that have asked the court to allow them to join the government in responding to the challenge to the buggery and gross indecency laws.

The court will hand down its decision on Wednesday.

8 replies on “Church takes some credit for lower murder numbers”