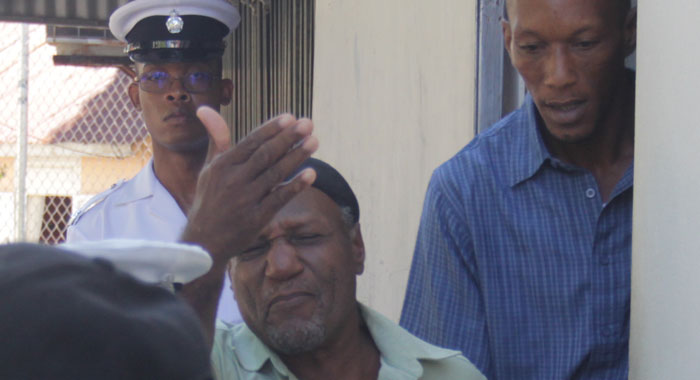 Joel Payne, left, and Jessie St. Cyr are escorted from the Serious Offences Court and taken to prison, on Tuesday, pending the payment of the fine. (iWN photo)

A six-year prison sentence for possession of 1,706 lbs of marijuana, completed in July 2018, was not enough to keep 57-year-old Barbadian fisherman Joel Payne away from Vincentian ganja.

Payne and his co-accused could have been in for an immediate stint at Her Majesty’s pleasure had it not been for the failure of the police to inform the court that Payne had a conviction in St. Vincent.

It took the men’s lawyer, Grant Connell, who had also represented Payne in the first case, to inform the court on Nov. 19 that contrary to what the prosecution had said, Payne was not a virgin to the law.

When invited to make submission on sentencing, Senior Prosecutor Adolphus Delplesche told the court that a matter had arisen that he would like to discuss with the chief magistrate and the defence.

The chief magistrate stood the matter down to meet with both sides, in chambers.

When the hearing resumed a few minutes later, Delplesche said:

“I felt very embarrassed when it takes the defence to say to this court that one of the defendants has a previous conviction and served time in our jurisdiction and our investigators were not able to get that information. For me, it is a very embarrassing position.”

He noted that Payne had been in custody on the extant charges from Nov. 13 and the sentencing hearing was taking place on Nov. 19, but his record had not been produced to the court.

Delplesche thanked the defence for their honesty.

“They did not have to say a word and he would have gone down as having no previous [conviction]. Thank you, my friend…” he said to counsel Connell.

“That having been said, I am not looking for a custodial sentence,” Delplesche said and sat down.

As the prosecutor spoke, several police officers who were involved in the operation that led to the arrest of the men spoke in hushed tones about informing the court that Payne’s criminal record has been brought to court on the day of his arraignment.

It was not clear why it was not brought to court for the sentencing.

Chief Magistrate Rechanne Browne said that she too, was also concerned by the fact that it took the defence to inform the court that one of the accused men has a criminal record in the jurisdiction.

Browne said that this admission must go to the benefit of the defendant.

“You may have wondered if your lawyer had lost his head, but you will get the credit for the disclosure,” she told Payne.

Browne commended the arresting officer, Corporal of Police 192 Douglas Caesar of the Rapid Response Unit (RRU) for making the arrest.

She, however, reminded him that he must be very astute in his investigation “and uncover all stones”.

According to the facts presented to the court, Caesar was among a party of RRU, Narcotics and Coast Guard personnel, headed by Inspector Nolan Dallaway, on sea patrol in search of a blue boat on Nov. 13.

As the Coast Guard approached the boat, the occupants began to throw several packages into the sea.

The Coast Guard signalled the vessel to stop, and after giving the order twice, the boat complied, some 20 nautical miles off Sandy Bay.

The occupants of the vessel were found to be Payne, Samuel and St. Cyr.

At the Coast Guard base, St. Cyr told Caesar that all the drugs belonged to him and that he was fully responsible for everything.

Caesar made an entry of this information in his pocket book and St. Cyr, Caesar, and Inspector Dallaway signed the entry.

The men and the packages were transferred to the Narcotics Base, where Payne told police, “Officer, I don’t know anything about that.”

Samuel said: “Officer, everything is mine. All the drugs is mine.”

The men pleaded guilty to the possession with intent to supply charge and attempting to the drug, and the drug trafficking charge was withdrawn.

Payne pleaded not guilty while his co-accused pleaded guilty to a charge that on Nov. 13, at Sandy, being prohibited immigrants, they entered SVG without a passport.

The trio pleaded guilty to charges that on the same date and place, they entered SVG other than a port of entry; entered the state by boat without consent of an immigration officer; and knowingly and wilfully, allowed themselves to land in the state as prohibited immigrants.

In mitigation, Connell had urged the court to fine and deport the men.

He said that the state had already spent EC$35,000 maintaining Payne for six years and urged that no further sums be spent to keep the non-nationals in prison for the marijuana offences.

In handing down her sentence, the chief magistrate granted the men the full one-third discount for their early guilty plea.

She rounded it off to a fine of EC$38,780 each, to be paid forthwith or three years in prison.

On the attempting to export the drug charges, they were sentenced to three years in prison, suspended for three years.

On the charge of entering the state without a passport, the St. Lucians were fined EC$300 forthwith or one month in prison.

Payne has a fisherman’s identification card and was reprimanded on this charge.

The chief magistrate ordered the men to pay the court EC$300 forthwith or spend one month in prison for entering the state other than at a port of entry.

The court also issued a removal order for the men.

In July 13, 2012, Payne, along with fellow Barbadians Ryan Corbin, 35, Shawn Boucher, 36, and Devon Hurdle, 38, were arrested off the coast of Fancy with 1,706 lbs of marijuana during a joint operation between Barbadian and Vincentian maritime law enforcement agencies, resulting in the six-year jail term.