Man with 2 guns, 396 rounds of ammo not a threat to society — lawyer 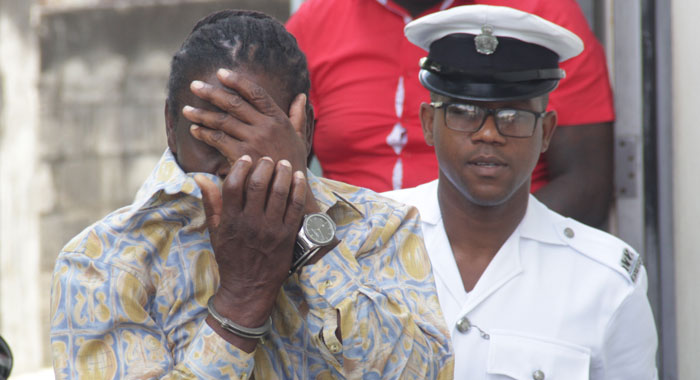 Sealey Matthias hides his face as he is escorted to prison last week Tuesday. (iWN photo)

Sealey Matthias, the 56-year-old Arnos Vale man nabbed on July 7 with two firearms and 396 rounds of ammunition, was not a threat to society his lawyer, Michelle Fife has argued.

Matthias is to be sentenced at the Serious Offences Court in Kingstown today, Tuesday, one week after his lawyer argued that he had harboured the weapons and ammunition without properly understanding the consequences of doing so.

She said that Matthias did not hurt anyone and the manner in which the crime was discovered, it was unlikely that he was going to cause any harm.

However, in his submission on sentencing one week earlier, Senior Prosecutor Adolphus Delplesche rebutted those arguments.

“When someone is found with a large quantity of ammunition, a shotgun, which when used, a shotgun cartridge carries about 112 pellets … so when you shoot one, that one can kill 112 people — because it mushrooms. That is a threat to society; society is in trouble when that happens; society is not safe when that happens,” the prosecutor told the court.

Fife, in her submission, had asked the court to impose a fine rather than the customary custodial sentence for firearm and ammunition offences.

A police officer investigating an accident involving Matthias’ vehicle found a Smith & Wesson .40 pistol loaded with 10 rounds of ammunition on the backseat of the vehicle.

A search of Matthias’ Arnos Vale home turned up a 12-gauge shotgun loaded with seven rounds of ammunition, with seven additional rounds in a box.

The entire operation netted the two firearms and 396 rounds of ammunition.

In her arguments before Chief Magistrate Rechanne Browne, Fife said that while it is customary for custodial sentences to be imposed for firearm offences because of the number of gun crimes in St. Vincent and the Grenadines, each case must be determined on its own merit.

Fife said that the law allows for a fine not exceeding EC$20,000 and a custodial sentence in default.

The lawyer reasoned that the opportunity to expand the jurisprudence was available to the court in terms of sentencing.

She said that if the court decided to impose a custodial sentence, the notional starting point for such offences tends to not exceed seven years in prison.

Fife contended that the mitigating factors in the case outweigh the aggravating features.

She noted Matthias’ age, adding that he is an independent contractor who works in the construction industry and has repaired many houses and has contributed to the development of many communities.

The lawyer said Matthias is also a farmer who has planted thousands of dollars worth of ground provisions consistently and also with a view to paying his debt to society.

Fife said that her client has no previous conviction and has always been a law-abiding citizen “so that a maximum sentence will be grossly disproportionate in the circumstances”.

The lawyer said that good character is a mitigating factor that affects the offender and should result in a reduced sentence.

The lawyer added that the case does not involve serious physical or sexual violence so that Matthias “is not dangerous in a sense that he presents an ongoing risk of serious harm in that regard to any member of the public”.

She asked that he be given a one-third discount for his guilty plea, adding that an early guilty plea is in the public interest and saves the court’s time.

The lawyer pointed out that the prosecution, in giving the facts, mentioned more than once that Matthias had said he had found the firearms and ammunition.

Fife argued that the prosecution had accepted this explanation.

She said that Matthias was not found discharging any of the weapons, adding that a no-harm circumstance is relevant to mitigation because of the nature of the charge.

Fife asked the court to consider the totality principle, where a person convicted of multiple offences is handed a sentence that reflects the total criminality but is just and proportionate.

She said any sentence imposed should be three to five years and asked for mercy and leniency.

In his submission, however, Delplesche said that in mentioning in the facts that Matthias had said that he had found the weapons, the Crown was not saying that it had accepted that explanation.

“You are a farmer and an accomplished builder and you just going around finding ammunition and guns? This is more somebody who deals in ammunition so he had his supply to supply to his customers,” the senior prosecutor said.

Delplesche said he agrees with the defence that the sentence should be proportional.

“The proportionality of sentencing somebody with a large quantity of ammunition and firearm must reflect the seriousness of having those things without a licence –proportionally. The time must fit the crime,” Delplesche said.

He pointed out that deterrence is an important aim of sentencing, adding that persons must know that they will not be allowed to be in possession of these implements that can cause death.

Delplesche asked the court to consider the reality of the society, adding that in past years, the country has seen an increase in gun crimes.

He said the Court of Appeal made that observation in the case of Azzie Bowens, and also did so in its last sitting in October, when it asked in a particular case whether appellants were going to fight a war.

The prosecutor said that the Court of Appeal is cognisant of the reality of the society.

Matthias was initially charged along with his common-law wife, Francella “Fatty” Thomas, 52, who pleaded not guilty to all count.

The prosecution withdrew the charges against her, after defence said that her clients had accepted the facts in the case.