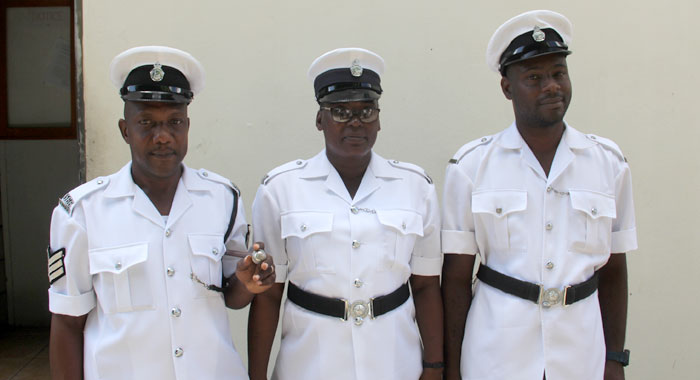 From left: Sergeant Giles and Police Constables Wright and De Roche outside the Serious Offences Court on Tuesday. (iWN photo)

A vigilant cop who went to investigate a car crash ended up finding an unlicensed Smith & Wesson .40 pistol loaded with 10 rounds of ammunition on the back seat of the vehicle.

That initial discovery triggered an investigation that led to another firearm – a 12-gauge shotgun – and a further 386 rounds of ammunition.

And last Tuesday, after the driver of the vehicle, Sealey Matthias, 57-year-old, of Arnos Vale, pleaded guilty to 12 charges related to that find, Senior Prosecutor commended the police officers involved for their work on the case.

The case began around 4 p.m. on July 7, when Police Constable 43 De Roche went to the Stubbs public road to investigate a motor vehicle collision involving PN200.

De Roche noticed that Matthias was behaving suspiciously and decided to conduct a search of the vehicle, resulting in the discovery of the loaded pistol.

In her mitigation on behalf of her client, defence counsel Michelle Fife had argued that it was unlikely that harm would have resulted from Matthias’ being in possession of the guns and ammunition.

“A car that was involved in an accident, the likelihood of harm was real. Tempers could have flared. Anything could have happened.”

The prosecutor emphasised that De Roche had gone to investigate a traffic incident.

“But he was so conscious of what his work was, and a police officer has to look at everything. De Roche, brilliant work; magnificent work. And when I leave here I will call the people and tell them; big people,” said Delplesche, a former detective.

Giles and Wright were among a party of officers who conducted a search at Matthias’ house, where the other firearm and ammunition were found.

“So commendation is in order for all three and all members of the party who went. Good work.”

In an aside to a police officer, Delplesche said that when the police do good work, he says so and when they do sloppy work, he also says so.

“I talk straight,” the prosecutor said.

Matthias was to be sentenced on Friday, but the sentencing was adjourned to next Tuesday at the Serious Offences Court in Kingstown.