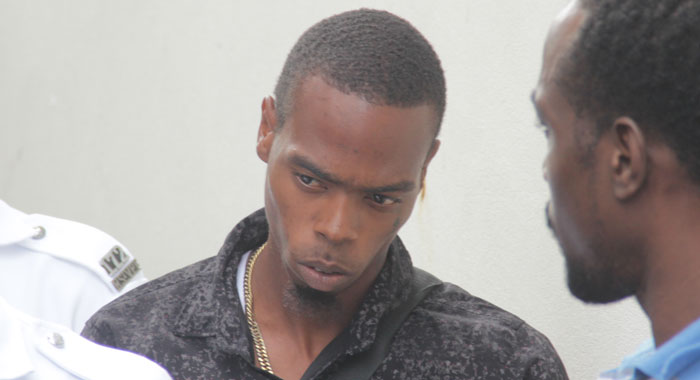 The accused, Shammai Hazell of Bequia waits to be escorted to prison in Kingstown on Monday. (iWN photo)

The man shot during a robbery in Canouan on Saturday has no “feeling from the shoulder down”, one of his relatives told iWitness News on Monday, as a man was charged in connection with the crime.

About 11:15 a.m. Saturday, Judson Jacobs, 26, of Arnos Vale, was shot in Canouan, where he had gone to purchase conch on behalf of a local exporter.

He became the fourth person shot in St. Vincent and the Grenadines in about 24 hours.

On Monday, Shammai Hazell, of Bequia, was brought before the Serious Offences Court in Kingstown, facing two charges in connection with the shooting in Canouan.

He was charged that on Saturday, Nov. 23, at Fisheries Canouan, he unlawfully and maliciously wounded Judson Jacobs, of Arnos Vale, with intent so to do.

Hazell was further charged that on the same date and place, being armed with a gun, he robbed Jacobs of one black and green Nike bag containing EC$10,000 in cash and at the time of so doing and in order to so do, put Jacobs in fear of being then and there subjected to force.

Hazell was not required to plead to the indictable charges, which were read to him by Chief Magistrate Rechanne Browne.

Delplesche told the court that Jacobs was a patient at the Intensive Care Unit of the Milton Cato Memorial Hospital with gunshot injuries to the shoulder and neck.

He asked that Hazell be remanded into custody pending an update on Jacob’s medical condition.

The chief magistrate denied bail and ordered that Hazell be remanded into custody until Dec. 2 for bail review.

Auxiliary Police Officer Kurtland Jack and two other males, were shot while attending the weekly social event at the popular entertainment spot in the nation’s capital.

6 replies on “Bequia man charged over robbery, shooting in Canouan”