Widow who killed abusive husband says he didn’t deserve it 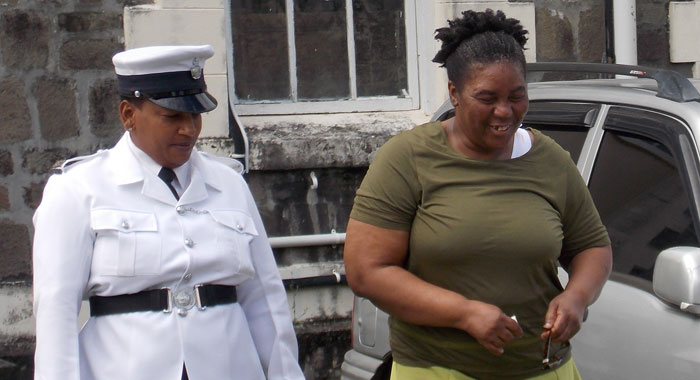 Hermina Jackson returns to prison after being sentenced on Wednesday. (Photo: Ashford Peters)

The La Croix woman who killed her husband during a domestic dispute in the presence of their son on July 11, 2017, was, on Wednesday, jailed for six years and six months.

However, Hermina Jackson, 52, will serve only a further four years and three months in prison, having been in custody since the death of her husband, Henry Jackson, 67, a retired chauffer.

Justice Brian Cottle handed down the sentence nine months after Jackson wrote a letter asking for forgiveness — ahead of her trial.

In the letter, which her lawyer, Grant Connell, read at the sentencing, Jackson said her husband — who had boxed her just before the stabbing — did not deserve to die as he did.

The letter, in part, said:

“I realised my mistake, I asked God to forgive me as I try to correct them.  I never had any intention to harm my husband; he didn’t deserve to die that way.  Many days I have felt pain and loss. I am deeply sorry at the death of my husband- a good man, a good father who cared for all his children.”

Connell further said the couple has a 10-year-old son who is now without a parent.

In September 2018, Mrs. Jackson, a caterer, had pleaded not guilty to a charge that she murdered her husband.

However, during the current assizes, she pleaded guilty to manslaughter, a lesser charge, and the Crown accepted the plea.

Connell told the court that his client was in the kitchen making juice for her now-10-year-old son who witnessed the entire incident.

He said the situation was “very unfortunate” as the son has to live with this for the rest of his life.

The lawyer further told the court that the absence of the mother is having its effect on the child, who is slated to write his primary school-leaving examinations next year.

Connell said the Jacksons had an argument over a bill that Mrs. Jackson had given her husband money to pay.

Instead of paying the bill, however, Mr. Jackson used the money to consume alcohol, the lawyer said.

As Mrs. Jackson was making the juice, her husband came into the kitchen and an argument ensued.

Mr. Jackson boxed his wife twice. She had a knife in her hand and Mr. Jackson got stabbed, the lawyer said.

He told the court that the medical report shows that Mr. Jackson had 19 cuts on his upper arm, adding that this was consistent with a struggle.

After the injured Mr. Jackson fell, his wife tried to resuscitate him and ran to neighbours seeking their assistance.

Jackson was pronounced dead on arrival at the Evesham Health Centre.

Connell said that from the beginning, his client admitted that she was wrong and has shown extreme remorse.

He asked the court to consider that his client is not a hardened criminal, not a threat to society, is a good candidate for rehabilitation, and, according to the social inquiry report, a good woman.

The lawyer said that prison authorities described Jackson as “involved”, and helps out other prisoners and participates in sewing classes.

Residents of La Croix described her as “hardworking”, the lawyer said.

In handing down his sentence, Justice Cottle noted the aims of criminal punishment: retribution, deterrence, prevention and rehabilitation.

The judge said that in arriving at a sentence, he considered that the defendant is a mother of five and that her relationship with her husband, at times, was challenging as Mr. Jackson had drunk alcohol.

Justice Cottle further pointed out that Mrs. Jackson had expressed remorse, pleaded guilty at first occasion and that the social inquiry reports said she is a good candidate for rehabilitation.

Manslaughter carries a maximum sentence of life imprisonment, but the court has established a starting point of 15 years.

The judge identified the aggravating features as the fact that a weapon was used, 19 wounds were inflicted and the incident happened in the presence of a minor — who is now 10 years old.

The mitigating features are that the incident was unplanned, it was a domestic brawl, Mrs. Jackson had no previous conviction, she cooperated with police and assisted in helping and seeking help for her injured husband, Justice Cottle said.

The court concluded that the mitigating factors outweighed the aggravating features and the sentence was reduced to 10 years.

For the guilty plea, the court awarded Mrs. Jackson the full one-third discount, seeing the sentence reduced to six years and six months.

Mrs. Jackson had spent two years, four months and 27 days on remand and this was further reduced from the sentence.

This means that she will serve a further four years and three months in prison.

“I am comforted by your progress made in rehabilitation,” Justice Cottle told the defendant and wished her the best.