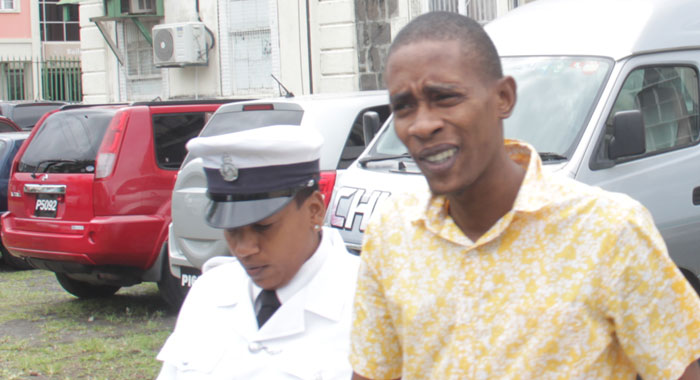 Lara Carter is escorted to prison on Thursday to serve his sentence. (iWN photo)

A man who shot multiple times, in both legs, a woman with whom he had a child and fired the weapon at her boyfriend, remained defiant even as he was about to be sentenced, on Thursday.

Lara Carter, 25, of Ottley Hall, maintained that he was innocent and, therefore, could not have pleaded guilty to the wounding with intent charge, on which a jury convicted him.

“I done see it reach to a stage. The most I could do is beg yo’ for a little mercy,” Carter, who was unrepresented, told High Court judge, Justice Brian Cottle.

In mitigation, Carter told the court that Deron Hazell, of Bequia, had told him that he had been involved in a similar incident and was sentenced to five years in jail.

In March 2013, then High Court judge Justice Frederick Bruce-Lyle sentenced Hazell to 12 years in jail for wounding with intent.

Hazell was initially charged with attempted murder in connection with a Dec. 5, 2011 attack on his girlfriend and mother of two of his children, Givvon Bynoe, in Bequia.

Hazell was initially charged with attempted murder but pleaded guilty to wounding with intent.

Carter, who spent several weeks on the run after the shooting, was initially charged with attempted murder. However, he was convicted of wounding with intent.

Carter and Baptiste had a child, Jaden Terel Baptiste, and lived at Ottley Hall.

However, the child, who was 2 years old, died when he was accidentally electrocuted on July 4, 2018 at his grandparents’ house in Ottley Hall.

In April 2018, Baptiste ended the seven-year relationship that she had with Carter, during which she had suffered verbal and physical abuse at his hands.

Carter had also been convicted and imprisoned for assaulting Baptiste.

On Oct. 1, 2018, he sent her text message inviting her to his home but Baptiste rejected the invitation.
Carter, who had previously threatened to kill Baptiste, then sent her an emoji of guns and arrow with the word “soon” superimposed on it.

On the fateful day, Baptiste contacted her boyfriend and arranged to meet him in her  neighbourhood and they spent some time in an abandoned house.

While there, Baptiste saw Carter walking along the road outside the house and shortly after 9 p.m., she told her boyfriend she was ready to go home.

Baptiste fell to the ground and Carter ran past her shooting at her boyfriend, who was running away.

After being shot, Baptiste remained quiet, not wanting Carter to know that she was still alive.

She then crawled to a nearby house where, while lying in the yard, she saw Carter walking in the direction of his yard with a gun in his hand.

The injured woman remained quiet as she was lying in the yard, and sometime later, an occupant of the house came outside, found her there and she was taken to hospital.

Police went in search of Carter but did not find him. They apprehended him in South Rivers on the first weekend in November 2018.

When Carter was taken to the police station, he said, in the presence of police officers that he would deal with Baptiste and her family if he is charged with shooting her.

Carter denied shooting Baptiste, claiming that he was at home at the time.

At the trial, he called as witnesses his father and cousin who testified to that effect.

In handing down his sentence, Justice Brian Cottle noted that in St. Vincent and the Grenadines the maximum penalty for wounding with intent is life imprisonment

The judge noted that Baptiste is 25 and, while she worked as a security guard before the shooting, she is now unemployed.

After the shooting, two screws were surgically implanted in her right knee, which has lost almost all range of motion.

The woman has also lost all sensation from her right ankle down and is able to walk with great difficulty by using a pair of crutches. She experiences constant pain in her leg, especially when it is cold and feels crippled.

Baptiste has been psychologically impacted by her experience and remains afraid that she would be shot again She is in constant fear, has difficulty-trusting people and feels ashamed when she is seen on crutches.

The woman can no longer go out and socialise as she did before because of her mobility challenges. Her friends avoid her for fear that they risk being shot when in her company.  Other residents of her community shun her because of a similar fear.

Justice Cottle noted that Carter, who is now 25, left secondary school in Form 1, but completed training in plumbing thereafter.

From the age of 16, he has had the attention of the police and had convictions for possession of drugs, theft, and assault, including assault on police officers and on Baptiste.

The judge noted that Carter remained adamant that he did not shoot Baptiste, despite her testimony.

During the trial, it emerged that while in prison awaiting trial for the shooting, Carter had used illicitly-obtained cellular phones to contact Baptiste.

The court is in the process of passing sentencing guidelines for wounding with intent. However, the Court of Appeal has established a starting point of 10 years, which Justice Cottle said he must follow.

He said that the aggravating features of the offence was that it involved the use of a unlicensed firearm and premeditation, in that Carter had threatened to shoot the complainant and made good on the threat.

Carter deliberately shot Baptiste multiple times and her injuries have left her permanently disabled, the judge pointed out.

Justice Cottle said that Carter had a history of violence towards Baptiste and remained defiant and showed no remorse.

The court saw no mitigating features of the offence.

In considering the offender, the judge noted that he had previous convictions including one for assaulting Baptiste occasioning actual bodily haram

Even when Carter was arrested, he issued threats to harm Baptiste and made them at the police station in the presence of the police, Justice Cottle said in identifying another aggravating feature of the offender.

The only mitigating feature was that at the time he was only 22 years old, Justice Cottle said, adding that the aggravating features far outweigh the mitigating.

In light of this, the court moved upwards from the starting point of 10 years to 14 years.

From this sentence, the court deducted the one year, one month and eight days that Carter has spent on remand, arriving at final sentence of 12 years, 10 months, and three weeks in jail.

“Mr Carter, do you understand?” Justice Cottle said after handing down the sentence.

In February 2018, one year after Carter was charged with assaulting Baptiste, they were jointly charged with conspiracy to discharge a firearm in a public place at Rose Place on Feb. 12. 2018.

Carter was further charged with possession of a firearm, make and model unknown, at Rose Place.

They both pleaded not guilty to the charges.