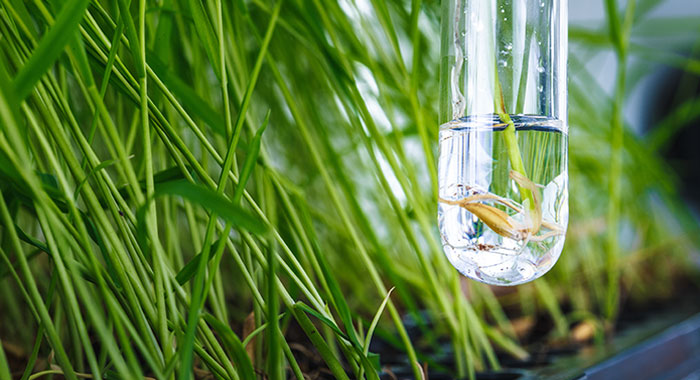 The Vincentian Parliament, on Thursday, passed legislation to protect the intellectual property of breeders of new plant varieties in St. Vincent and the Grenadines (SVG).

Minister of Agriculture Saboto Caesar said the Plant Breeders’ Protection Bill, 2019 was a “trailblazing piece of legislation” that brings into focus “how we have to always marry our quest to develop the agricultural sector with the best science”.

But, in his response, shadow minister of agriculture, opposition lawmaker Roland “Patel” Matthews, said the opposition had no fundamental objection to the introduction of such legislation in SVG.

Matthews, however, said that while the agriculture minister did not mention marijuana, he (Matthews) believes that the new law can have implications for local strains of cannabis.

Matthews, who is Member of Parliament for North Leeward, noted that under the law, a person does not have to reside in or be a citizen of SVG to apply for a plant breeder’s right.

“So while there are advantages, I am concerned about the fact that it is a new thing for us, and while our local farmers are expect[ing] to benefit, I am hoping that the day will not come when we have an industry in St. Vincent flourishing for years, and we have to come back and ask for permission or buy seeds, for example, to plant whatever we are planting.”

Caesar told lawmakers that the law protects the intellectual property of persons who are engaged in plant breeding.

It also sets up the jurisprudential framework within which these persons will be able to accrue the rights, how these rights will be protected, how they will be published so that persons in the entire society, in the court and globally, can be aware of the hard work which was done, the agriculture minister said.

“This doesn’t affect the farmers who are going to reproduce some of these varieties on their own land,” he further stated, adding that the law also brings into focus marrying with the best science, the nation’s quest to develop the agricultural sector.

“Some persons may wish to divorce agriculture, which is a science, from the deep scientific work which should be involved. And this is not only for agriculture. It is also for fisheries and the other productive sectors that we are embarking [upon] as a people, as a country to build,” Caesar said.

“If you utilise varieties that are not productive, you will not get the kind of return on your investment that you should obtain and definitely, it will have a negative impact on our work to continue the transformation of the rural economy, national development; it will have an impact on the export figure, on the important figures.”

He said that plant breeding is the process by which the characteristics of a plant are changed over time to make them more prolific.

This includes making them more disease-resistant or tolerant, making the food from these plants more nourishing, or making the plant more productive.

And with the law now in place, SVG will seek to become the third, he said.

The law says that registrar must grant a plant breeder’s right for every eligible application.

“So this basically speaks to the potential of plant breeders to operationalise an industry as a result of the work and the intellectual properly that they would have been able to secure,” Caesar said.

The law also speaks to the privilege of farmers to grow the plant on their own land without infringing on the rights of the plant breeder.

Offences under the law include falsification of register and falsely representing a plant variety as a protected variety.

Meanwhile, Matthews noted that plant breeders’ rights are a form of intellectual property rights by which plant breeders can protect their new varieties in the same way that an inventor protects his invention with a patent.

He said that SVG is a country that prides itself as having agriculture as one of its exports.

“It is of interest to me that in the year 2019 — we are just going into 2020 — we are now embarking on what we consider plant breeders protection.”

The North Leeward MP said he mulled over what triggered the law at this time.

Matthews said the bill had come to Parliament one year and a day after lawmakers passed the law for the legalisation of marijuana cultivation for medicinal purposes.

Matthews said that the bill speaks to denomination, where the new plant species is given a code by which it can be known.

“And that is your invention. It belongs to you,” he said, noting the conditions under which another party can use the protected material.

“If a person has to do all of that, then you must have the permission or the authorisation of the owner of that commodity. Let us come home to reality. I talk about this as it relates to the medical cannabis industry and the poor Vincentian farmers.”

Matthews noted that some of the investors in the medical marijuana industry in SG are Canadians.

“At the moment in Canada, there are plant breeders protection rights given to investor in marijuana and persons who produce different varieties in marijuana.”

He said that in SVG, while people talk about the different “high grade marijuana that we grow here, whether cannabis sativa or cannabis indica, whatever we grow, we do not have any protection in St. Vincent for our marijuana”.

Matthews, however, said that according to the bill, anyone could apply for plant breeder’s protection in SVG, whether they are citizens, resident or non-national.

“We know the condition of our local farmers, who we expect to be making a meaningful contribution to the industry that we are taking about, are we going to ensure, with the state of the art facility that we have that our local farmers will be in some way or the other given some protection under this act? I didn’t see it spelled out but I hope that somewhere in it that we can make provision tot hat effect.”

Matthews said that the plant breeders protection is a not a new science but has been around for a long time and there are people with the resource and technology not available in SVG.

“And they are at a n advantage when it comes to these kinds of things. We might be boasting about 50 years in ganja cultivation. But, basically, it is like the same thing in our fishing industry. We’re still doing things in the same way that people way back were doing it…”