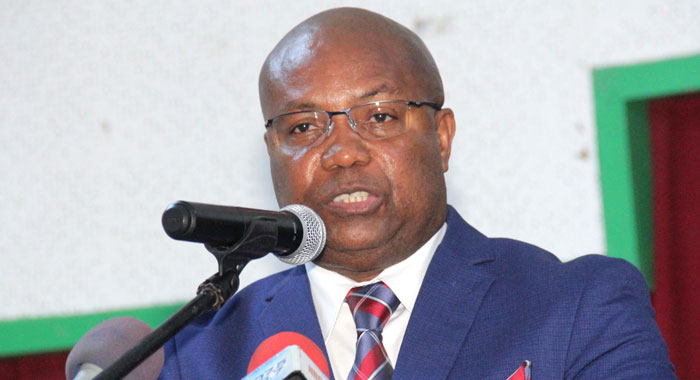 Commissioner of Police Colin John has commended the rank and file of the Royal St. Vincent and the Grenadines Police Force for a decline in reported crime in 2019.

The country, however, recorded some 24 homicides this year, including the death of Arnotte Hope, 58, of Pole Yard, who died on Saturday, one day after the police chief’s speech.

There was a reduction in the other categories of serious crimes also, with the number of reported robberies standing at 94, down from 135 in 2018, which had represented an almost doubling of the 71 recorded in 2017.

“… I just want to applaud the members of the Royal St. Vincent and the Grenadines Police Force for the hard work that they are doing. The reduction in crime can be attributed to the hard work, the dedication, the loyalty and the proactive policing that we are employing in the organisation,” John told the annual police awards dinner, held in Kingstown, on Friday, under the theme “Rewarding the Outstanding while Motivating the Aspiring”.

The most outstanding officer at each police station was presented with a plaque.

“And once again to the members of the organisation, I am saying thank you. It can also be attributed to the level of training that we are receiving. We have benefitted from training from local bodies, regional bodies – such as the Regional Security System, CARICOM Impacts, and international bodies such as Interpol,” John said.

Police statistics shows that fewer crimes were reported in four of the six policing divisions, with only the Grenadines and North Western Divisions registering more crime in 2019 than in 2018.

At the Canouan Police Station, there were 57 reports of crime in 2019, compared to 71 last year when the figure fell by almost half, in comparison to the 138 reported in 2017.

In the North Leeward Division, there was an almost quadrupling of the number of crimes reported to the Spring Village Police Station.

The statistics from 2017 to 2019 show that in the Central Division — which includes the Criminal Investigations Department in Kingstown, the Questelles Police Station and the Narcotics Branch — 2,113 crimes were reported.

In the South Central Division, which includes the Calliaqua and covers most of the medical colleges and the hotel and tourism belt, there were 1,442 crimes reported this year.

Calliaqua, Mesopotamia and Biabou police stations all registered decreases, with the number in Biabou falling from 305 in 2018 to 250 this year, which was also less than the 2017 figure — 259.

“And we have benefited from a facility where we can train more persons. In the US, they have sponsored a piece of equipment and we are able to conduct online training, so we can train like 20, 30 persons one time by virtual network,” he said.

“We have very hard working police officers and I just want to say thanks to you for your support, your guidance, your assistance. As I often say, I will treat every man and every woman as a big man or a big woman until you prove otherwise,” John told the awards dinner.

“Sometimes I may have to show the less soft side of me, but I never promise anybody that you will never see that side.  But I really hope and I try as far as possible not to utilise that part of me but it is very much a tool in the arsenal that I utilise from time to time,” John said.

The top cop described as “snags” and “glitches” the recent case of police officers being charged with various criminal offences.

“They came about, we faced it head-on, we took it on the chin, we allow the authorities to do what they have to do. The matters are before the court, I will not comment on it further and even more so, this is not an event to dwell on the negatives,” said John, a lawyer and former prosecutor.

“This is an event to accentuate the positives and that’s what I am doing tonight. So I just want to say that despite of these negatives, we have had a lot of positives throughout the year 2019 and before and I just want for us to concentrate on all these positives,” he said.