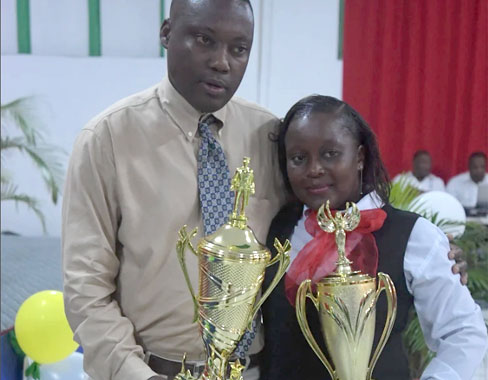 Detective Sergeant 593 Karla Timm and Police Constable 191 Glendon David, a driver, have been named Policewoman and Policeman of the Year 2019.

The announcements were made on Friday, Dec. 28, at the Annual Police Awards and Retirement Dinner, held in Kingstown under the theme, “Rewarding the Outstanding while Motivating the Aspiring.”

Sportsman of the Year and Sportswoman of the Year were won by PC 857 Desron Maloney and Corporal 108 Oliver, while the Commissioner of Police Award for Bravery went to Leading Seaman 848 Peter Morris.

Awards for most outstanding police officer at the stations and in the divisions were also presented at the event.

Policewoman of the Year

Timm has over 15 years of service and experience and has worked at the Criminal Investigations Department for 10 of those years and four years at the Major Crimes Unit.

A citation described her as a versatile officer with a “tenacity and penchant for investigative work” who has surpassed many of her contemporaries.

Her unwavering commitment to duty and country and zeal to get things done, has earned Timm the moniker “The Woman Ah Business”.

Timm is a member of the Police Week, Crime Prevention, Entertainment, Sports, Food, Children Christmas Party and Decoration committees and is also a host on the Police on the Beat radio programme.

Timm has represented the RSVGPF on Regional Security System peacekeeping missions in Dominica, including in the lead-up to the December 2019 general elections.

She also represented the RSVGPF in sports in Grenada, St. Lucia and Barbados.

“During the year under review, this ‘go-getter’ policewoman has exemplified the qualities and leadership that a model officer should; and this has resulted in her earning this prestigious award,” the citation said.

Policeman of the Year

In addition to copping the Policeman of the Year title, Davis was also adjudged the most outstanding officer at the Calliaqua Police Station and in the South Central Division.

The citation said David’s commitment to his work and to the people within the division has left an interminable impression on his superiors, hence his nomination for the police outstanding male police officer of the year.

“It is easy to overlook a driver for this award, but for the year 2019, this officer’s keen eye for investigation, coupled with his attitude and drive to execute his duty as a police officer has led to a remarkable contribution to the organization,” the citation said.

David was given “the heavy task” of executing over 100 warrants within his division. And over a two-week period, David impressed his superiors by decreasing the total number of warrants to fewer than five.

“His work with liquor licence within the district was done in the same likeness and he was commended for causing numerous delinquent shopkeepers to settle their outstanding liquor licence bills,” the citation said.

“Vigilance is a trait that every police driver is expected to have in order to ensure the safety of the occupants of the transport and the other users of the streets. What is also impressive about this officer is his ability to identify irregular situations and act on them whilst travelling along the main road. This action by PC David has led to the resolution of major cases within the district, and the elevation of policing standard within the area,” the citation said.

“Though there are other remarkable contributions by other police officers through this year, PC David’s exceptional contributions has most certainly placed him a cut beyond his peers for 2019 for this prestigious award.”