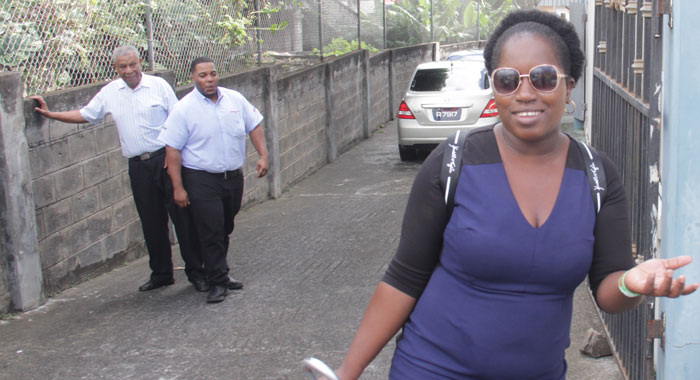 The 89-year-old businessman alleging that Nigerian-Vincentian Eunice Dowers, 28, used his credit card without his permission says the woman was a good worker and he was surprised by her alleged actions.

Bertille “Silky” Da Silva told the Serious Offences Court, on Wednesday, that while in police custody, Dowers admitted to using his credit card without permission, apologised to him and asked to be forgiven, saying she did not want to go to jail.

Dowers, who is Vincentian by marriage, is charged with 52 counts of theft, fraud and money laundering, which she reportedly perpetrated while in Da Silva’s employ at Star Garage — from April 2018 to February 2019.

He told the opening day of the trial, on Wednesday, that Dowers was a good worker and was no longer with the company because of an altercation she had had with her co-worker, Marlon Stephenson, a supervisor.

He said he was not in the office at the time of the altercation but was told that Stephenson and Dowers were cursing and fighting in the office.

The businessman said that Dowers was first employed as a secretary, in which capacity she received bills and took information.

She then became a Customs broker, responsible for clearing goods, mainly cars and car parts, at the Customs.

Star Garage was responsible for paying the Customs fees and did so by cheque.

“I authorised them,” Da Silva said of the cheques, adding that he is the only person at the company responsible for signing cheques.

Detailing the process of clearing the imported items, Da Silva said the company would get the invoices from its supplier, which it would pass to Dowers, the broker.

Dowers would prepare the documents and take them to Customs.

She would ascertain the amount to be paid to the Customs and make out a cheque, which Da Silva would sign.

He said that Star Garage also imports office supplies and that the process for clearing them with Customs is the same as with cars and spare parts.

However, the payment for the office supplies is done via a credit card in Da Silva’s name, he told the court.

He said he keeps the credit card in a cabinet in the office where he sits.

“I usually sometimes authorise the use of the credit card,” he said, adding in response to a question from Crown Counsel Rose-Ann Richardson, that he also authorises the use at the other times also.

Richardson, along with Karim Nelson, is representing the Crown in the matter, while Grant Connell is for the defence in the trial, which is presided over by Chief Justice Rechanne Browne.

Da Silva said that his nephew, Joshua Da Silva, the manager of Star Garage or Stephenson, would say what the company needs then they would send the credit card.

He said that the company does not order cell phones, or cell phone credit – some of the goods and services Dowers is accused of purchasing with the credit card.

“Amazon has nothing to do with topping up [cell phone credit],” Da Silva said.

Da Silva further told the court that his company is not in the business of ordering hair products, home accessories and supplies, and personal effects.

“She nearly mash up the garage, mash up our credit rating,” he said of Dowers.

Call her ‘defendant’, not ‘criminal’

One day, Da Silva said, Stephenson went to order some computers and office supplies and the credit card was declined.

Da Silva said he said that that couldn’t be, so he called CIBC First Caribbean International Bank (FCIB), which had issued the credit card.

“It is then we realised what was happening with that criminal over there,” he said, pointing at Dowers.

Da Silva said he used to get statements from the bank “from time to time” but it was when Stephenson told him that the card was maxed out and he called the bank, which said all the money was gone, “It was then I realised she was using the card.”

Da Silva said that after he learnt of the development, he next saw Dowers at the police station, but he can’t recall the dates.

“When I saw her, I said, Mrs Dowers, why you do something like this?”

“I said, ‘What about the money you used already?’

Da Silva said he never gave Dowers permission to use the card.

“I don’t give anybody at all the credit card,” he said, adding that Dowers did not say what she had used the money for and that was the extent of their conversation.

He said it had never occurred to him that the credit card was being used without his permission.

Da Silva said that Dowers would write up the cheque and once they are made out to the accountant general he would sign them.

He again referred to Dowers as a criminal and the prosecutor told him that he had to refer to Dowers as the defendant.

“She is a wolf in sheep’s clothing,” Da Silva said.

“You have to refer to her as the defendant,” the chief magistrate interjected.

Continuing with his evidence, Da Silva said Dowers would sometimes say that she had goods to clear at the airport and because of the distance, he would give her a signed cheque made out to the Accountant General but with the amount blank.

“But instead of that, she was importing goods and using those same cheques to clear her personal goods,” Da Silva said.

The businessman said that Dowers should have handed in to the company receipts for the use of the cheques but she did not and cursed the secretary, Andrea Peters, when she inquired about them.

Da Silva said that Dowers was not handing in receipts regularly but he never personally asked her for any.

“I thought at the time she used to bring back receipts,” he said.

Da Silva was shown several carbon copies of cheques which were tendered into evidence, one of which he said was written in Dowers’ handwriting.

“And to me, something was changed, because, apparently it was different and ‘Trans Ocean’ is over it,” he said, adding that he did not authorise any payment to Transocean on Nov. 30, 2018, the date of the cheque.

Another cheque in the sum of $3,227.77 to the accountant general had had the figure crossed out, Da Silva said, adding that he did not recognise the handwriting on the cheque.

On another cheque, “accountant general” was crossed out, Da Silva said, adding that once the cheque was to the account general, he would have signed it.

He said he did not know who authorise the crossing out of the figure, nor did he know what the cheque was for.

Da Silva said that statements from the bank were irregular and that he did not look at them nor does he know who does.

He said he did not know if the cheques in question were used for Star Garage business, adding that after the matter was reported to the police, he didn’t personally look at them.

He, however, said that he had given Dowers the credit card to order something from Amazon and when she was done, he put it back where it is kept.

Da Silva said he couldn’t recall the year or the month or what Dowers had ordered but that it had to be Star Garage business.

No permission to use credit card

He told the court that he could not recall giving Dowers the card again nor did he give Dowers permission to keep the information from the card.

“Who would do that?” Da Silva said.

“Who would do that; especially a man like me? Especially she is a Nigerian. I was so surprised because I thought my credit card was quite secured. I nearly drop down,” Da Silva said, adding that he thought someone had to take the card with them to make a transaction.

During cross examination, Da Silva said that his nephew and Stephenson would order computers and office supplies from Amazon on behalf of the company and would use the credit card to make the payments.
He said that Joshua has permission to do “anything” but can’t sign cheques, neither can Da Silva’s brother, Casper.

Da Silva said that when Joshua travels, he is given the credit card and is able to use it, but only his (Bertille Da Silva’s) name is on the card.

The businessman said he cannot recall when he last gave the credit card to his nephew, but he said it was before Dowers joined the company.

He said he sees his credit card statements “occasionally” but could not recall the time frame because they are sometimes late.

“It is sent from the bank to me,” he said of the statements, adding that he can’t recall which of his employees is responsible for bringing the statements to him.

He said that when he gets the statement, he begins checking if there is a strange transaction.

“For instance, Joshua will travel and when he come, I will check to see if he did anything in excess,” Da Silva said,

He said he usually makes the credit card payment before the bill reaches him.

The trial continues on Thursday.

On Wednesday, the court granted an application by Nelson to summons FCIB employee Marva Hannaway, an FCIB worker who he said had prepared certain documents relevant to the case but seemed “reluctant to come willingly to court”.