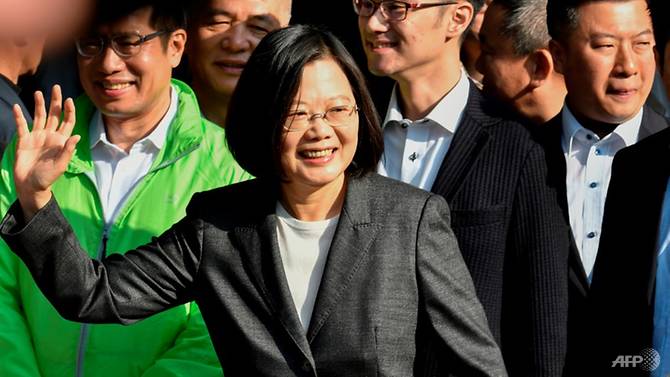 Taiwan President Tsai Ing-wen, centre, waves after voting at a polling station in New Taipei City, on Saturday, when she was elected to a second term in office. (Photo: AFP/Sam Yeh)

Taiwan’s President Tsai Ing-wen was, on Saturday, re-elected to a second four-year term in office.

Tsai, who heads the pro-independence Democratic Progressive Party (DPP) won by a 20 percentage point margin over Han Kuo-yu, of the main opposition and pro-unification Kuomintang (KMT).

Tsai garnered 7.9 million votes, or 57%, compared to Han, who won his party’s nomination just over a year after being elected mayor of Kaohsiung, Taiwan’s second-largest city.

Tsai was elected amidst heightened and months-long tension between China and Hong Kong, in what observers say could be an indication of what things could be like if Taiwan and China were to reunite.

China claims self-ruled Taiwan as part of its territory and has threatened to use force against the island and its 23 million people if it declares formal independence.

China has wooed several of Taiwan’s allies since Tsai came to office, with only 14 of 193 United Nations member states recognising Taiwan as a state independent of China.

This compares to 21 allies when Tsai came to office in 2016.

St. Vincent and the Grenadines (SVG) is among a handful of Caribbean nations that maintain diplomatic ties with Taiwan.

And with general elections expected in SVG before year-end, Kingstown-Taipei ties is expected to become a campaign issue.

The main opposition New Democratic Party, under new leadership, is standing by the policy announced by the then leader in April 2016, that it will formally recognise Beijing, if elected to office.

In the meantime, Prime Minister Ralph Gonsalves of the ruling Unity Labour Party has expressed commitment to Kingstown-Taipei ties.

Last July, during an official visit to SVG, Tsai pledged Taiwan’s continued support to SVG in the areas of agriculture as well as infrastructural and human development.