St. Vincent opposition party says it would switch ties from Taiwan to China 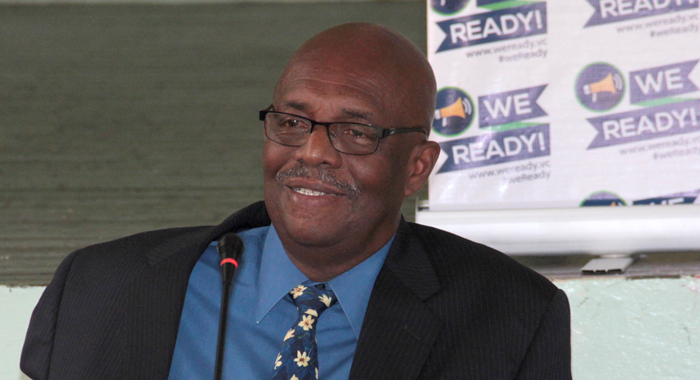 The main opposition New Democratic Party (NDP) has announced a major foreign policy shift, saying it would switch diplomatic recognition from Taiwan to China if it is elected to office.

The announcement by NDP president and Leader of the Opposition, Arnhim Eustace on Tuesday, represents a change in one of the last common policies that the NDP shared with the ruling Unity Labour Party.

St. Vincent and the Grenadines has maintained unbroken diplomatic ties with Taipei since 1981, even as several other Caribbean nations, including Dominica and Grenada, have switched ties over the last decade.

Beijing says that Taiwan is a renegade province to be reunited with the mainland, by force if necessary.

SVG remains one of just five CARICOM nations, three of which are also Organisation of Eastern Caribbean States (OECS) members, that continue to recognise Taipei over Beijing.

The others are St. Lucia, Haiti, St. Kitts and Nevis and Belize.

The Dominican Republic completes the list of Caribbean nations that recognise Taiwan.

In making the announcement, Eustace said that the NDP “constantly monitors the state of international affairs, with specific emphasis on how they impact various parts of the world, our own vital economic and other interests, as a small island developing state in the Caribbean”.

He said that a number of recent and on-going developments are “portentous for international trade, global finance, immigration, development assistance, and regional security”.

He mentioned among these the United Kingdom’s decision to leave the European Union — “Brexit”, and its aftermath; the prolonged collapse of oil prices and its impact on the economies of major global and regional players, including Brazil, Trinidad and Tobago, and Venezuela; the expanding reach of terrorism and the ramifications of the upcoming U.S. presidential and congressional elections.

Eustace also spoke of “growing concern and scepticism, in some quarters, about efficacy, and even the current relevance of CARICOM and its institutions”; urgency to conclude major international trade deals, like the Trans-Pacific Partnership (TPP), which was drafted Oct. 5, 2015, signed Feb. 4, 2016, and now awaiting ratification by 12 Pacific Rim countries, namely the US, Canada, Mexico, Australia, New Zealand, Vietnam, Brunei, Japan, Chile, Malaysia, Peru and Singapore.

The NDP leader said there was escalating tensions in the South China Sea, a major shipping route and important traditional fishing grounds, through which trillions of dollars in products pass; instability in several volatile areas of the world; and continuing malaise and mismanagement of Vincentian economy.

“The NDP is observing these developments for their potential effects on St. Vincent and the Grenadines, and the wider Caribbean region.

As a modern political organisation, we continue to discuss and formulate a range of appropriate measures and responses to on-going geo-political realities,” Eustace said in the statement made at his party headquarters and broadcast live.

“Recognising these changes in our election manifesto, we had promised to make adjustments to our diplomatic missions overseas to include a strong component for trade and investment promotion, as distinct from the normal consular functions.

“In this regard, fully cognisant of the ever evolving symmetry of international affairs, and the principal responsibility and obligation of our party, in or out of government, to diligently pursue and protect the best strategic interests of our country, I hereby formally announce that the New Democratic Party of St. Vincent and the Grenadines as of today’s date, August 23rd 2016, has taken the decision to recognise the United Nations accepted norm of a One China Policy.

“Our party, under my leadership, has evolved to the world view that is embraced by almost every country in this region, and indeed the world.”

Eustace said the One China Policy will be a key international relations platform of the NDP, adding that his party will “move to change from the province to Beijing when we form the next government shortly.

“It must be noted that the People’s Republic of china is a crucial member of the Caribbean Development Bank, from whose funds St. Vincent and the Grenadines has benefitted over the years.

“Of the entire 16 members of CARICOM, St. Vincent and the Grenadines is only one of four countries not in step with the internationally accepted One China Policy. Our international relations stance is in keeping with all of our traditional friends — the United States, Canada, Europe and most of Latin America.

“Our international relations stance is in keeping with all of our traditional friends — the United States, Canada, Europe and most of Latin America.

“The People’s Republic of China is indeed a major international player and the New Democratic Party looks forward to close relations with its party and government,” Eustace said.

The announcement by the NDP comes months after the return to office in Taiwan of the Democratic Progressive Party (DPP), which favours independence from Beijing.

Observers have been monitoring Beijing-Taipei interaction after the election in Taiwan of Tsai Ing-wen, the nation’s first woman president, whose DPP favours independence from Beijing.

After eight years of Beijing-Taipei rapprochement under then president Ma Ying-jeou of the nationalist Kuomintang in Taipei, beginning in 2008, political observers fear that both sides of the Taiwan Strait could return to the diplomatic war of a decade earlier and the military tensions of that era.

Sources in diplomatic circles have said that both Taipei and Beijing have rebuffed each other’s allies who had expressed an interest in switching diplomatic ties during the Ma administration, which saw greater integration of the China and Taiwan economies.

Asked about the “warming” relationship between China and Taipei and if he thinks both sides intend to preserve that relationship, Eustace said: “I don’t think one can describe the present situation in that way.

“This newest administration in Taiwan has not followed that path. The hostility has increased.”

Asked what he sees as the benefits of switching ties, Eustace reverted to his statement, saying, “the changing state of the world”, mentioning again Brexit, matters related to immigration, security, and SVG’s regional partners.

“That’s one of the reasons why we change how we think our embassies should be structured. We take account of the changes that are taking place in the world.”

When it was pointed out to him that a country must look first at it own national interest and asked in what way he sees SVG benefiting from switching ties, Eustace said:

“We are looking for more trade and investment and there are institutions, which, for instance, like the CDB which is financed by China now. That wasn’t so in the earlier years… They have relationship with 12 other countries and others are thinking of making the change also. Most of the world accepts the One China policy and they do so because they perceive there are benefits to their economy.”

Taipei and Beijing have agreed that there is One China but have a tacit agreement that each side would define it as it sees fit.

Eustace said the United Nations has a One China policy that is respected all over the world.

The announcement by the NDP comes just three months after Eustace attended an event hosted by the Taiwan Embassy in Kingstown to toast the inauguration of the nation’s first female president.

Speaking at that event on May 20, Eustace said he was happy to hear Tsai say the relationship between Taiwan and SVG will continue to grow.

He said that the two main political parties in SVG are at one in their support for Taiwan.

“I’ve said before that if there’s one thing we don’t quarrel about, is Taiwan.”

He noted the 35 years of diplomatic relations between Taiwan and SVG.

“And I believe there is no other mission here that has the same type of general relationship with our population as you have with Taiwan,” Eustace said.

He said the contribution of Taiwan to the economy and culture of SVG is very important and meaningful.

Eustace’s announcement comes just one week after Minister of Foreign Affairs, Sir Louis Straker, said that Kingstown is hoping to establish diplomatic presence in Taiwan and will hold talks in that regard in Taipei later this year.

SVG has benefitted significantly from its relationship with Taiwan both in terms of infrastructural and human resource development.

Taiwan has financed the terminal building at the Argyle International Airport, along with 15 learning resource centres across the country, plus bridges and other infrastructure. Last Friday 17 Vincentian students left SVG for Taiwan to pursue university degrees there, funded by scholarships from the Taiwan government.

8 replies on “St. Vincent opposition party says it would switch ties from Taiwan to China”