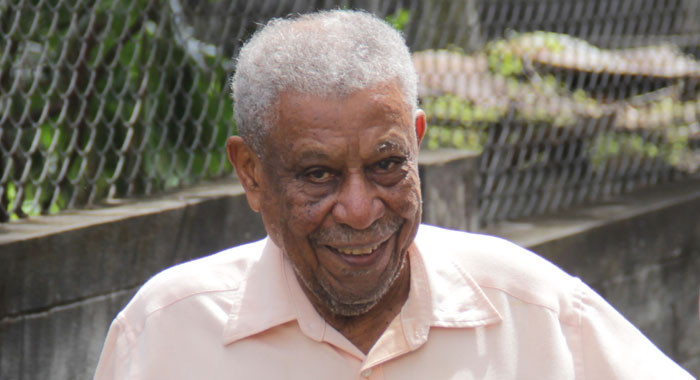 A banker has told the trial of Vincentian-Nigerian fraud accused Eunice Dowers that the bank may have issued two credit cards to the Star Garage account.

Hannaway said any credit card issued to the account would be marked  “Star Garage” along with the name of the cardholder.

She said cards had been issued in the name of Bertille Da Silva and Casper Da Silva, but no further cards were issued to Casper after the initial one.

Dowers, 26, is being tried on 52 counts of fraud, theft, and using the credit card of her former boss, Bertille “Silky” Da Silva, 89, without his permission.

The defence is suggesting that the two were in a relationship and the businessman gave her permission to use the card.

Dowers is alleged to have stolen EC$100,000 from Star Garage between April 2018 and February 2019, when she was in the company’s employ as Silky’s secretary and the company’s Customs broker.

During her evidence-in-chief, Hannaway, who was summoned to give evidence, was asked if the bank ever blocked the credit card.

“I think we were requested by Bertille Da Silva because there were transactions they were not familiar with,” said Hannaway, who has 35 years of banking experience.

She told the court that some corporate and personal accounts are treated as one and the same, adding that Star Garage has its own card and bank account at FCIB.

The banker said she did not know the limit of the Star Garage credit card and would have been able to say had she checked it before coming to court.

She said she could not recall the account or credit card number for Star Garage.
Hannaway said that when a client applies for a credit card, they are asked about the nature of their business and this guides the bank in setting the credit limit.

During cross examination by defence counsel Grant Connell, Hannaway said a suspicious activity report (SAR) would also be picked up elsewhere — where the cards are monitored — but no SAR was ever generated for the Star Garage account.

Hannaway told the court that Silky made a report about his card, but she had no idea what he does with the card.

She said that while she could not remember when the report was made, it was done several months ago.

The witness said there has also been a letter from the Commissioner of Police, but this was addressed to the manager of the bank.

Hannaway said she responded to queries by Joshua Da Silva — general manager of Star Garage — to get the statements associated with the credit card.

“Joshua was the one who came to collect them. Bertille Da Silva requested them by phone,” she further said.

Hannaway was shown the credit card statement that she had printed from her bank’s system as the Da Silvas’ request.

She was asked about a transaction with itunes.com. and the banker said she did not know what that transaction was for.

She confirmed that based on the document, however, there had been activity with Digicel since November 2018.
Hannaway also said there was activity with Uber — a US multinational ride-hailing company — and Bose — a manufacturing company which predominantly sells audio equipment.

Hannaway told the court that the limit on the card was not as high as $169,000. “That much I know, she said,” adding that while there is no maximum credit limit, Silky would be in the higher category.

The banker said that she could have known, in the past, the limit of the credit card in February 2019, and could have checked it if she were at work and had access to the system.

Hannaway said the bank did not highlight any unusual spending activity to Joshua nor did it make him aware that the spending limit had gone over 300% of the normal capacity.

She said that one does not have to be in actual possession of a credit card to use it.

The banker said that based on her personal experience, an online merchant, when processing a transaction, may ask for any or a combination of three things, in addition to others.

These are the card number, the name on the account, the expiry date of the card, the CSC – some security digits to the bank of the card.

She said that when a credit card is maxed out, it would automatically be declined.

Hannaway said she did not know the balance in the Star Garage card when the bank was asked to block it, nor could she recall when the request was made.

Hannaway said she was not requested to unblock the card and that she still manages the Star Garage account.

The trial continues on Tuesday when Joshua is expected to complete his testimony ahead of cross examination.