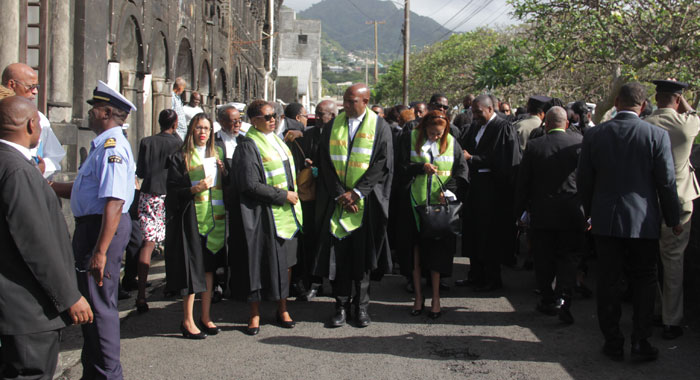 Judges and other officers of the court outside the Cathedral of the Assumption after the church service Monday morning. (iWN photo)

A Christian cleric has urged judicial officers in St. Vincent and the Grenadines (SVG) to not accept bribes, saying that doing so “opens the door for corruption in the society, and corruption undermines justice and the implementation of law”.

Bishop Leopold Friday cited Deuteronomy 16:18-20 in support of his exhortation at the service at the Cathedral of the Assumption in Kingstown, on Monday, to mark the opening of the 2020 law year.

“This text from Deuteronomy warns against bribery, for bribery opens the door for corruption in the society, and corruption undermines justice and the implementation of law,” Friday told the gathering of judges, lawyers and other court officials.

“It undermines the rule of law, promotes public distrust about the integrity of government, and weakens essential capacities for sound economic, social and political development. On the other hand, strengthening judicial integrity and related capacities to combat corruption can have enormous benefits.”

The bible verses say that judges must render just decisions and must not distort justice.

“… you must not show partiality; and you must not accept bribes, for a bribe blinds the eyes of the wise and subverts the cause of those who are in the right. Justice, and only justice, you shall pursue, so that you may live and occupy the land that the Lord your God is giving you,” the Old Testament passage further stated.

Friday said research shows that corruption in the Justice System can be identified basically in two ways:  political interference in the judicial process by the legislative or executive branch, and bribery

He said that bribery and political influence in the justice system erode social cohesion and disrupts and hinders community growth and development and reduces the ability of the justice system to fight against corruption and to serve as a body which inspires and promotes freedom, self-confidence, integrity, independence and accountability.

“Corruption in the judiciary includes any inappropriate influence on the impartiality of judicial proceedings and judgements and can extend to the bribing of judges for favourable decisions, or no decision at all,” the bishop reasons.

He said judicial corruption includes the misuse of judicial funds and power.

“It also refers to unfair case allocation and in other pre-trial procedures, such as when bribed court clerks ‘lose’ files and evidence. It can influence any trial or court settlement, and the enforcement — or not — of court decisions and sentences.

“Court officials may seek bribes for services; lawyers may charge additional ‘fees’ to expedite or delay cases, or to direct clients to judges known to take bribes. There is some concern that poor salaries, insecure working conditions, unfair promotion and transfer processes and a lack of continuous training, can make judges and other court personnel vulnerable or susceptible to bribery,” Friday said.

He said that the scripture’s urging that “justice, and only justice, you shall pursue” emphasizes the need for all people of SVG, particularly those in the justice system, legislature and executive branch “to accept and submit to a transcendent norm for this will inspire and promote a greater commitment to justice in a society that stands above all participants in the socio-political process”.

To enhance this, Friday suggested that everyone accepts, as stated in the Constitution, that Vincentians, as a nation, acknowledge the supremacy of God.

“This is to say that we are not an atheistic society and that our values, principles and laws are based on transcendent norms,” he said.

“Those in the justice system are encouraged to develop and display a positive self-image, built on belief in the values of individual honesty and professional ethics, for this is fundamental to combating corruption.”

He said that Singapore, which has made important strides in judicial reform and reducing public sector corruption, has adopted a set of ten “commandments” to frame its approach to judicial integrity.

At the special sitting of the High Court to mark the beginning of the law year, High Court judge Justice Cottle noted the bishop’s sermon.

“And if we take nothing else away from this opening this morning, we could do a lot worse than remember Bishop Friday reminding us that justice is something which is meant for the benefit of all of the people.

“So the judiciary is not appointed or controlled by the executive. The judges are expected to serve all the people of St. Vincent and the Grenadines.”

Justice Cottle said that judges are expected to serve all the people fairly.

“And that is something which, on behalf of my sisters and myself, I recommit again … to be impartial. We will thrive always to do nothing to distort justice, and, certainly, we will be accepting no bribes,” he said, referring to the other jurists, all women, at the bench.